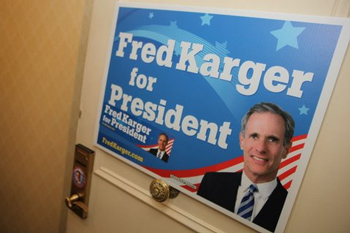 As a gay republican, Fred Karger knew he was a bit of a longshot in the GOP presidential primary. He’s been openly threatened by party officials and denied slots and speaking opportunities in debates and political confabs that included candidates as fringe as he is. But Karger managed to get on the ballot for the New Hampshire primary, and decided to invest most of his resources in faring well in the state that tends to lean libertarian. Karger was the first candidate to run ads there, and he spent months campaigning on the ground, handing out his signature “Fred Who?” frisbees to surprised voters. But five days before the primary, Karger got word that the company hosting his campaign website, Terra Eclipse, was shutting him down.

Terra Eclipse works with Republican candidates to do web tech and new media campaigns. Clients have included former Minnesota governor and GOP presidential hopeful Tim Pawlenty, Rep. Ron Paul (R-Texas), and the tea-party affiliated group FreedomWorks. But apparently Karger’s campaign rubbed the firm the wrong way. Two days before Terra Eclipse informed Karger that it was dropping him as a client, Karger helped launch an interactive website subtly aimed at Mitt Romney called Top10CraziestMormonBeliefs.com to which readers submitted such entries as “Mormons believe a con artist is a prophet who found golden plates in NY.” It was intended as a jab at Rommey, and it was hosted on another platform, but Terra Eclipse informed Karger:

While your campaign has every right to express views using tactics of your own choosing, our company also has the right to freely associate with our clients. In light of these actions, which not only appear to be completely irrelevant to a campaign for President of the United States, but also constitute an insult to and mockery of individuals of particular faiths, we are exercising our right to terminate your NetBoots account and disassociate with your campaign, as reserved in our Terms of Service (attached).

I invite you to contact our attorneys should you wish to pursue the matter further.

Karger immediately suspected that the Mormon Church was involved in the move. He sent out an email to supporters suggesting as much, noting that one of Terra Eclipse’s clients was Sen. Mike Lee, a Mormon Republican from Utah. He noted in the email that the church has good reason to be unhappy with him. Terra Eclipse founder Martin Avila calls the notion that the church was involved in the decision “kind of preposterous” and said, “That’s kind of nuts, but whatever.” He declined further comment.

Karger has been battling the Mormon Church since 2008 when he got involved fighting California’s Proposition 8, the ballot measure that banned gay marriage in the state. Karger discovered and helped publicize the fact that the church was secretly dumping tens of thousands of dollars worth of man-hours and in-kind donations to the effort, running phone banks, busing in volunteers from Utah, producing ads, and raising millions of dollars in coordinated contributions from its members. Yet in state-required campaign spending reports, the church only reported spending about $2,000. After a complaint by Karger, state elections officials investigated and ended up finding the church guilty of 13 counts of late campaign reporting and fined it about $5,000 for failing to include the full extent of its spending on the initiative.

Karger has found new life for his criticism of the Mormon Church in the campaign of Mitt Romney, whom he has said publicly may be more loyal to his church than to the citizens he could be elected to serve. He told the Salt Lake Tribune in January, “How can a President Romney turn down a call from the First Presidency?” Karger asked. “He has been an obedient, faithful Mormon his whole life; he won’t just disregard it. I think the separation of church and state is designed to prevent exactly that.” Karger has been pressing Romney to encourage the church to end its financial support for campaigns to ban gay marriage, even showing up to protest his appearances during a 2010 book tour.

But Karger’s more recent attacks on the church, like the “10 Crazy Beliefs” website, have come in a different context, a presidential campaign that has featured some pretty nasty anti-Mormon bigotry aimed at Romney. While Karger was on solid ground exposing the Mormon role in supporting Prop 8, “10 Crazy Beliefs” threatened to put him in the same camp as the Baptist pastor Robert Jeffress, who in October called Mormonism a non-Christian “cult” and suggested that voting for Romney would give credibility to said cult. It’s probably not much of a surprise that Karger’s hosting company decided to pull the plug on him, Mormon Church involvement or not.

Still, Karger is making the most of the incident, using it in a recent fundraising appeal in which he fumes:

Candidates for political office should not be subject to this type of destructive treatment by a vendor because of content not even on the web site that it is hosting. I want the world to know it.