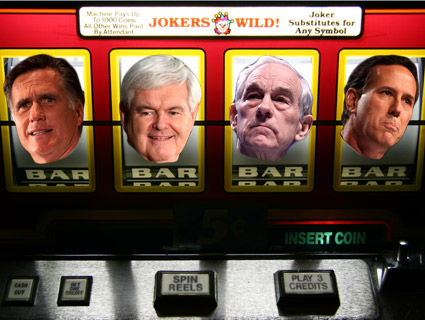 Grappling with a decisive loss to Mitt Romney in the GOP’s Nevada Caucus last night, Newt Gingrich unleashed one of his sharpest attacks ever on the front-runner. “If you can’t tell the truth as a candidate for president, how can the country possibly expect you to lead as president?” Gingrich asked a Vegas ballroom full of reporters, referring to Romney’s performance in the most recent debate, in Jacksonville on January 26. He added: “I have never seen a person running for president be that untruthful.”

Romney surprised nobody with his victory in Nevada. He was holding a pair of aces: a strong on-the-ground operation and the fact that about a quarter of Nevada caucus voters share his Mormon faith. Still, Nevada was a painful bust for Gingrich. Coming after a loss in Florida, his battle with Texas Congressman Ron Paul for a distant second establishes a pattern of declining support for his campaign and hurts his status as standard bearer for the GOP’s conservative base.

In a state where a housing and tourism slump is fueling one of the nation’s highest rates of unemployment, Romney bested his opponents despite sounding like an out-of-touch rich guy for most of the week. On Wednesday, he’d told CNN’s Soledad O’Brien that he was “not concerned about the very poor” because “there is a safety net there.” The next day, billionaire Donald Trump didn’t much help things when he popped into (where else?) a Trump-branded casino to endorse the former governor. Still, it was Gingrich who emerged from the affair looking clueless. His campaign staff had misled reporters at the New York Times and other major outlets into reporting that the Trump endorsement would go Newt’s way, only to see Trump play a different card.

Of course, Gingrich already has his own Trump of sorts, in the billionaire casino magnate Sheldon Adelson. A staunch defender of Israel who has given $10 million to a pro-Gingrich political action committee, Adelson also knows how to pull strings. The Nevada GOP agreed to end voting later than it had initially planned yesterday, leaving enough time for orthodox Jews to hold an evening caucus at Adelson’s casino, after the official end of the Saturday Sabbath. Nevertheless, the Gingrich Jews were clearly outnumbered tonight by Romney’s Mormons. Adelson is already hedging his bet, signaling that he’ll back Romney if Gingrich keeps fizzling.

And then there’s Ron Paul. No candidate had staked more on Nevada. His backers spent months knocking on doors and pounding campaign placards into isolated patches of desert in a bid to convert the state’s famous libertarian streak into votes. He even landed an endorsement from the ladies at Bunny Ranch, one of Nevada’s legal whorehouses, where employees launched a “Pimpin’ for Paul” media campaign. It was all part of a broader strategy to focus on caucus states, where an unwieldy voting process gives a leg up to pols with committed supporters and strong get-out-the-vote ops, both of which Paul has in spades.

Paul’s loss on Saturday might destroy his already weak claims to electability, but it by no means ends his influence during primary season. His operatives have become much more integrated into the GOP since his 2008 run, and they want to use his delegates from Nevada and other states to force policy changes within the party. That is, if Paul’s voters will let them. A popular chant at recent Paul rallies, “Ron Paul or none at all,” doesn’t offer the other candidates much incentive to court his endorsement.

Speaking to reporters last night, Gingrich spun his defeat by noting that Sen. John McCain lost to Romney four years ago in the Silver State before going on to cinch his party’s nomination. Of course, McCain had already won New Hampshire and Florida by then.

Looking ahead to the primaries in Colorado, Minnesota, and Missouri, the big question is how long Gingrich will try to build himself up by tearing Romney down. So far, he’s shown no qualms about exacerbating divisions within the GOP. “Nominating one more moderate—it didn’t work in 2006, it didn’t work in 2008,” Gingrich said last night. “I don’t think that’s a very good future for the Republican Party, and in a race against Barack Obama, I don’t think it’s a very good strategy.”