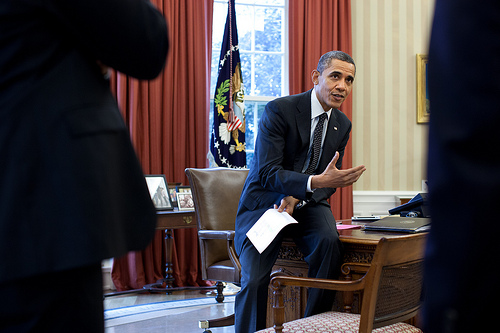 In the late 1990s, Bill Clinton and the Democratic National Committee faced blistering criticism for wooing wealthy donors with White House sleepovers, coffee breaks with the president, and rides on Air Force One. A decade later, as a candidate, Barack Obama bashed the cash-drenched culture of Washington politics. And as president, Obama has rejected lobbyist donations and pledged to keep lobbyists out of the White House and donors at a healthy distance.

Yet according to a new analysis, big-time donors are finding the Obama administration’s doors flung open to them. An analysis by the Associated Press found that since mid-2009, more than half of Obama’s top donors, as well as givers to a super-PAC backing his re-election bid, scored invites to the White House. Out of some 470 Obama donors, the AP found that at least 250 of them had attended White House parties or sat down for intimate meetings with Obama advisers.

At a recent state dinner, 30 Obama donors received invitations from the White House, where “they mingled with celebrities and dined with foreign leaders on the South Lawn of the White House,” the AP reported.

Donors gaining access to the president, of course, is a bipartisan tradition in Washington. But the AP’s analysis comes at a tricky point for Obama when it comes to campaign finance:

Obama’s campaign has said it would begin encouraging supporters to donate to a “super” political action committee supporting him, Priorities USA Action, to counterbalance the cash flowing to GOP groups. The decision drew rebukes from campaign-finance watchdogs and Republicans who said Obama flip-flopped on his prior stance assailing super PAC money. The group supporting Obama has raised $6.3 million so far.

Visitor-log details of some of Obama’s donors have surfaced in news reports since he took office. But the financial weight of super PACs and their influence on this year’s election have prompted renewed scrutiny of the big-money financiers behind presidential candidates—and what those supporters might want in return.

Many of the White House visits by donors came before the president embraced the big-money, fundraising groups he once assailed as a “threat to democracy” on grounds they corrode elections by permitting unlimited and effectively anonymous donations from billionaires and corporations. Obama was once so vocal about super PACs that, during his 2010 State of the Union speech, he accused the Supreme Court in its 2010 decision in the Citizens United case of reversing a century of law that would “open the floodgates for special interests.” But the success of Republicans raising money changed the stakes.