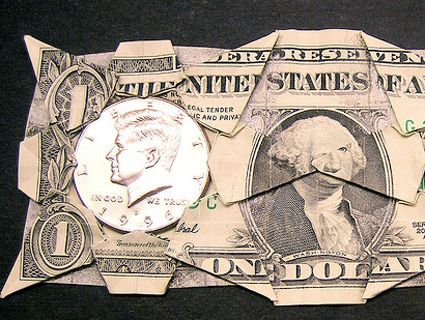 Tourists riding the subway in Washington this week are likely to see more than just the new cherry blossom stickers newly affixed to the turnstiles. They’ll also be getting schooled in one of the more obscure fights going on in Congress right now: whether to replace the dollar bill with a coin.

Opponents of a proposed bill that would replace the paper dollar have bought a raft of advertising in DC Metro stations, including virtually every available billboard at the system’s hub at Metro Center, to rally Americans to save the paper dollar. Posters sponsored by “Americans for George” (as in George Washington) cover tunnel walls, imploring people to save the iconoclastic emblem of American heritage.

A quick look at the website for Americans for George suggest that the ads are the joint product of a bunch of laundromats, bowling alleys, vending machine companies and some bars, including one Scalawags Fish & Chips restaurant. But the average laundromat does not have the sort of deep pockets to cover Metro Center in slick ads. Instead, the deep pockets behind the George campaign are those of the Crane paper company, which is best known for making swanky wedding invitations but also manufactures the paper that US currency is printed on.

Crane, which is based in Massachusetts, is an American institution. According to the company, Paul Revere engraved banknotes for the Colony of Massachusetts Bay on Crane paper to help finance the American Revolution. Crane obviously has a big stake in the elimination of the dollar bill, and so it’s taken to the streets (or rather, the subway tunnels) to gin up opposition to the proposed law. The company’s got a pretty good case to make. For decades, Americans have firmly resisted any efforts to introduce dollar coins into circulation, and new polling data that the Americans for George commissioned from pollster Frank Luntz and others confirms that Americans really hate the dollar coin.

Coin supporters like Sen. Tom Harkin (D-Iowa), who co-sponsored the coin bill in the Senate, have argued that replacing the paper dollar would be better for the environment and save the taxpayer lots and lots of money. Coins cost three times more to produce than a paper dollar, but they have a two-to-three-decade lifespan, versus three or four years for paper bills. Harkin even made a video on his website showing him trying unsuccessfully to stuff a wrinkled dollar into a vending machine.

Harkin says in the video that getting rid of paper dollars would mean that fewer trees would be cut down in the service of the dollar, and that coins would be recyclable when their lifecycle of 30 years finally ends.

However, Harkin’s enthusiasm for the dollar coin isn’t simply driven by environmental concerns. In fact, the impetus for the coin bill has come from big copper mining interests, who happen to have an outpost in Harkin’s home state and aren’t known for being especially ecofriendly, either. PMX industries is one of the country’s largest suppliers of copper, and Harkin has been a long-time supporter of the company, which is a subsidiary of a large Korean conglomerate and also supplies metals to the US Mint.

The coin lobby has its own campaign going on, through the Dollar Coin Alliance, which Harkin links to on his website. The chief sponsor of the coin bill in the House is Rep. David Schweiker (R-Ariz.). His state is also home to large copper companies backing the bill, and they’ve contributed to his campaign. Arizona Sen. John McCain (R) is the co-sponsor of the coin bill in the Senate and also received significant funding from a big Arizona copper company.

Randy DeCleene, a spokesman for Americans for George, says the Metro ads are simply designed to let people know that the debate is actually going on in Congress. Besides, he notes, Harkin has his facts wrong. The paper American dollars are printed on isn’t made from trees; it’s made from cotton, so no trees are being sacrificed, nor would they be saved by switching to dollar coins.

(Harkin’s office recognized the error, but responds by saying, “This video was intended to be a light-hearted way to illustrate the benefits of the dollar coin, the cost-savings of which are well-documented by the [Government Accountability Office]. Senator Harkin is heartened to know that trees across America can rest assured that passage of his bill will not put them at any greater peril. It’s a win-win for forests and taxpayers.”)

DeCleene’s group’s focus groups suggest the ads will be effective. He says that once people hear that Congress is really wasting time on the issue, their first response is, “You’ve got to be kidding me.” That makes sense, he argues: “Who wants to carry around a pocket full of coins?”

Before working at the PR firm running the campaign to save the paper dollar, DeCleene did a stint working as Vice President Dick Cheney’s deputy press secretary. I asked him whether Cheney preferred the paper bill over coins. DeCleene said with a laugh that he didn’t know, but said, “Being the good American he is I’m guessing he’d be for the bill.”