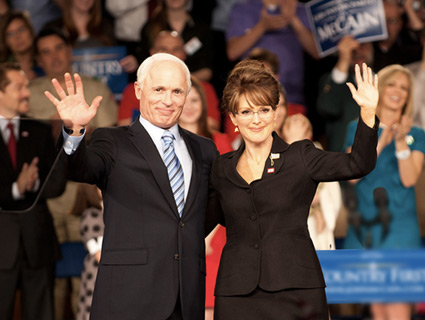 At its core, Game Change is a Gothic fable in the most classic and traditional sense: A well-intentioned (political) scientist sets out to perform a feat of tremendous galvanism. In his pursuit of this big dream, he inadvertently creates a monster—one he comes to disown. In a flash, the beauty of the dream vanishes, and breathless horror and disgust fills the creator’s heart. But too late! The monster is unleashed on the world, leaving a trail of chaos, defeat, and bewilderment in its wake. The scientist later confesses at length his confounding regret.

In this version, campaign strategist Steve Schmidt is Dr. Victor Frankenstein, John McCain is the corporation that he works for, all of America is the unsuspecting village people, and Sarah Palin is [cue the music….] the Adam of Schmidt’s labors.

Game Change, which premieres on HBO on Saturday, March 10, at 9 p.m. EST to a flurry of Beltway anticipation, zeros in on the more depressing chapters of the 2008 presidential campaign, namely the former governor of Alaska and mayor of Wasilla. In adapting the bestseller by John Heilemann and Mark Halperin, the filmmakers jettison much of the 2010 book’s inside scoopage—on the Obama camp, Rudy Giuliani, the Clintons, John Edwards messin’ ’round—to focus exclusively on the fumbling, dysfunctional McCain campaign.

Senior adviser Steve Schmidt (played by a feisty, riveting Woody Harrelson) is the story’s reluctant protagonist. He’s brought aboard the McCain Train to tighten up messaging and restore a sense of discipline. His signature master stroke comes just days before the nominating convention, in which he leads the push to scrap McCain’s original post-partisan plan to tap Joe Lieberman as his running mate. McCain’s one-sentence directive for locking down an emergency replacement?

And thus enters “game-changer” Palin—in top hockey-momming form—with her poise and social-conservative street cred. McCain gets a bump in the polls, the Republican base gets a much-needed shot of energy.

Spoiler Alert: John McCain does not become president of the United States, and Sarah Palin quickly becomes the unmitigated, spotlight-hogging disaster we’ve all come to cherish. “What have we done?” Schmidt—despondent and high-strung—exclaims after first witnessing Palin’s acute fear and blundering on the campaign trail.

It’s at this point that Game Change turns into a greatest-hits collection for Palin: The Charlie Gibson interview. The Katie Couric interview. Her own team melting down over her divalike behavior. The petty campaign in-fighting. And, of course, the accounts of Palin veering into 19th-nervous-breakdown territory. Basically Palin is portrayed as a mash-up of a querulous child, Kathy Bates in Misery, and Miss South Carolina Teen USA 2007. (It’s no surprise that the Palin posse has been voicing its intense dissatisfaction with the film.)

But for all its Palin-sanity, HBO’s new drama on the human tragedy (or, put plainly, the desperate stupidity) of the McCain campaign amounts to little more than a deeply unsatisfying guilty pleasure.

Game Change marks the return of the creative duo of screenwriter Danny Strong and director Jay Roach, the men behind the HBO movie Recount, a severely fictionalized retelling of Bush v. Gore, starring Kevin Spacey and John Hurt. Roach (past credits include comedies like Meet the Fockers, the first two Austin Powers flicks, Dinner for Schmucks) directs with a confident, steady hand. Likewise, Strong stays clear of the terminal heavyhandedness that is all too typical in modern biopics and political dramas; he managed to craft a decent script that doesn’t have any heroes.

But the film never strays from the obvious. In fact, much of it sounds as if it were taken verbatim from a 60 Minutes segment that aired in January 2010. The audience is left with what we have for years already known, albeit told in a competent way: The emergence of Sarah Palin was an extremely unpleasant headache for all those involved.

In keeping the movie’s running time down to a brisk two hours, Roach and Strong stick to the basics. Political junkies looking for a comprehensive rundown of the campaign will no doubt be disappointed. For instance, in Game Change‘s re-creation of the Charlie Gibson interview, the juicy bit about Palin simply not knowing what the Bush Doctrine was is left on the cutting room floor. The film touches on Bill Ayers and Jeremiah Wright, but glosses over Rashid Khalidi and “that one.” The proto-tea-party nastiness shouted at McCain-Palin rallies is collapsed into a 40-second montage. And the character of John McCain is reduced to an extended cameo, lacking character development, straight-talk quips, and emotional depth.

Matters aren’t helped by the fact that the film contains only a handful of memorable or particularly powerful moments. The closest the movie comes to achieving a lasting impact are when (a) Schmidt delicately comforts Palin by comparing her gaffes to Reagan’s and, (b) when Schmidt finally gets to lay a decisive, long-awaited verbal smackdown on Palin during election night.

But what really saves Game Change is the ace acting. Julianne Moore—one of the most capable, versatile actresses of her generation—is disturbingly dead-on as Sarah Palin. In what could have easily buckled into glorified parody or stunt acting, Moore exquisitely balances the elements of power lust and insecurity that characterized Palin’s private and public persona. Every vocal inflection, every pouting expression, and every glimmer of rabid egotism is honed to a polished, Emmy-ready nonpareil. She does a hell of a job of making you sympathize with Palin when you’re supposed to, and makes you feel a rush of ire when you’re not.

Other high marks in casting include a convincing Sarah Paulson (disgruntled Palin handler Nicole Wallace), a charming, coolheaded Peter MacNicol (national campaign manager Rick Davis), and the always worthwhile Bruce Altman (attack-ad maestro Fred Davis). Unfortunately, in what is surely the film’s most squandered opportunity, the usually terrific Ed Harris sleepwalks through his portrayal of the Arizona senator; Harris has the walk and body language down to a science, but he doesn’t get much room to flex his acting chops. It turns out McCain is not much of a player in his own drama—something that was a challenge for the filmmakers, just as it was for the actual campaign.

Game Change concludes as a cautionary tale, when McCain tells Palin that she is now one of the “leaders of the party” and warns that she must not allow herself to be co-opted by right-wing “extremists” like Rush Limbaugh who will “destroy the party, if you let them.” But the scene is rushed and ultimately inconsequential; it doesn’t pan out as the clever kicker that Roach and Strong were going for.

Perhaps the McCain-Palin saga was too outrageous and fascinating to confine to a two-hour production. We can only wonder if Game Change: The Miniseries would have yielded better results.