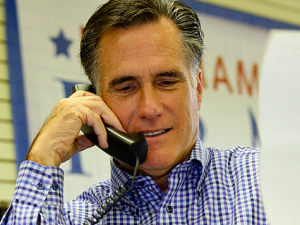 In his first major test since a pair of disappointing third-place finishes in Mississippi and Alabama, Mitt Romney crushed Rick Santorum in Tuesday’s Illinois primary, adding to his already considerably delegate lead and placing him closer to the GOP presidential nomination.

For Romney, that’s the good news. The bad news is that this whole process isn’t going to end anytime soon.

Addressing supporters in Gettysburg—yes, really—Santorum framed this election once more as the most important since 1860 while attempting to spin his poor performance for the best. “We’re gonna win central Illinois, we’re gonna win western Illinois,” he said. “We won the areas where conservatives populate and we’re happy about that.” And then he took a shot at Romney, who just moments earlier told supporters in Illinois that “economic freedom” will be on the ballot next fall. “It all boils down to one word, and that’s what’s on the ballot in this election, and that’s the word ‘freedom,'” Santorum said. “I am pleased to see that Governor Romney is now adopting [that message].”

Romney and his affiliated super PAC, Restore Our Future, outspent Team Santorum 21:1 in the Chicago media market (where almost half the state resides) and 7:1 statewide. That mattered. Romney’s lead over Santorum among Illinois primary voters grew in each of the polls conducted this month, from +4 to +6, +9, and eventually +15. The former Massachusetts governor’s biggest victories during the 2012 race have been defined by his ability to significantly outspend his top opponent on the airwaves, and in Illinois, 74 percent of voters said campaign ads influenced their vote. (One small caveat: As Nate Silver points out, Romney’s advertising advantage is still relatively tame compared to his expenditures in early states like Iowa.)

The night also reinforced what we already know: If Romney is, in fact, quite vulnerable, there’s little to suggest that Santorum is capable of beating him. Despite casting himself as a candidate who can appeal to rural and rust-belt voters, Santorum got crushed in a state that has both in abundance. And he effectively handed the result to Romney before the polls even opened by failing to get his delegates on the ballot in four Illinois congressional districts. Santorum didn’t make matters any easier with his own tactical decisions, opting to spend most of last week in Puerto Rico, ostensibly for the purposes of rounding up support ahead of the territory’s caucus—which handed all 20 delegates to Romney.

The race may seem all but over, but it’s not likely to end anytime soon. Santorum is the heavy favorite heading into Saturday’s Louisiana primary, and a win there will only reinforce the notion that Romney can’t win Southern voters. The ex-senator is also a heavy favorite in next month’s big Pennsylvania primary. Romney, meanwhile, is continuing to waste money and resources he’d much rather be using on the general election. He spent more money than he took in over the last month. Get ready for more of the same.