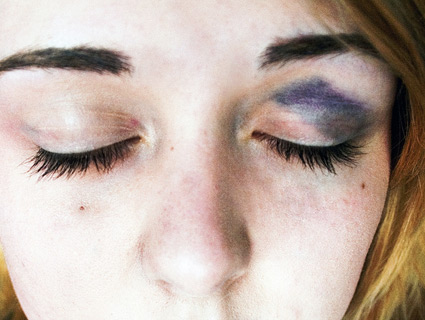 There are three reasons some Republicans are trying to block the reauthorization of the Violence Against Women Act: Gays, immigrants, and Native Americans.

The Violence Against Women Act (VAWA), which first passed in 1994 and has been reauthorized twice since then, increased federal penalties for domestic violence and provided funding for groups and services that aid victims of domestic abuse. The bill hit the bipartisan sweet spot of being both tough on crime and oriented toward women’s rights. Usually it’s reauthorized without much fanfare. This time around, however, several Senate Republicans, led by Sen. Chuck Grassley (R-Iowa), are putting up a fight. Despite the fact that the bill has several Republican sponsors, all eight GOP senators on the Judiciary Committee voted against the bill when the committee considered it last month.

“While this is a bipartisan effort in this Congress, it’s certainly a tougher slog than most of us expected,” says Lisalyn Jacobs, vice president for government relations at the women’s rights advocacy group Legal Momentum.

In a speech before the Senate Judiciary Committee in February, Grassley laid out his objections to the bill. Republicans’ biggest qualms are about provisions that make federal grants to domestic violence organizations contingent on nondiscrimination against gay, lesbian, and transgender victims; rules extending the authority of tribal courts over domestic violence matters; and a section that would provide more visas for abused undocumented women who agree to cooperate with law enforcement.

“I wish we could proceed in a consensus fashion again,” Grassley said. “But there are provisions in the bill before us that have never been part of VAWA before. They’re not consensus items.” Grassley says he wants the reauthorization to pass—just without the parts he considers extraneous. Here’s a quick breakdown of what has the GOP riled up.

State and federal prosecutors have the authority to prosecute domestic violence on reservations, but for geographic and logistical reasons, it often goes unaddressed. “A federal prosecutor is not going to be able to expend the kind of energy on misdemeanors that local police officers would spend energy on,” says Paulette Moore, vice president for public policy at the National Network to End Domestic Violence.

As Mother Jones reported last year, local authorities’ inability or unwillingness to deal with domestic violence cases in Native American communities has contributed to an underground industry of vigilantes for hire who take matters into their own hands. The current version of the Violence Against Women Act would allow tribal authorities to prosecute non-Indians for domestic violence cases on Indian reservations, but Republicans are opposing it because they don’t like the idea of Native American law applying to non-tribe members.

“For the first time, the Committee would extend tribal criminal jurisdiction over non-Indians,” Grassley said in his floor speech. “I do not believe the Committee has a good understanding of what the consequences would be of doing so.” The bill contains language that affirms non-tribe members prosecuted receive the same due process protections they would be entitled to under the US Constitution.

The bill’s supporters expressed confusion at Grassley’s logic. “Suppose your sister was with you in Washington, DC, and her husband beat her up,” Moore says, “but because he was from Virginia, Washington couldn’t do anything about it.”

Immigration: The original Violence Against Women Act contained provisions that allow undocumented victims of domestic violence to apply for legal status, called a U visa, if they agree to cooperate with law enforcement. But because it took a few years for the federal government to set up the program, there’s a backlog of thousands of U visas that were never used. The U visas are crucial for domestic violence victims because they give them work authorization along with legal status, which means they aren’t reliant on their abuser for income.

“We have caps for a reason. The US can’t take everybody who comes to our shores, as much as many would like to,” Grassley said. “Caps are a way to control the flow of people. They are a stop-gap measure against fraud.” Grassley also wants more restrictions on U visas, which would, among other requirements, force victims to obtain doctor’s notes documenting their abuse and mandate that the abuse be reported to law enforcement within two months of its taking place. US Citizenship and Immigration Services already has an anti-fraud unit, however, and law enforcement officials themselves sign off on U visas.

The Obama administration has met the 10,000 cap twice in the past two years. Undocumented immigrants who look like good candidates for U visas are often given deferred action, which means they’re not deported. But women who are waiting for U visas don’t get work authorization during the delay, so many find it difficult to support themselves.

Supporters of the bill say that rather than fraud, reaching the U visa limit shows how effective they are in fighting crime. “This is not just a tool for the victims; they’re a tool for law enforcement,” says Gail Pendleton, codirector of Asista, which offers legal services to immigrant victims of domestic violence and is funded in part through VAWA grants. “There are law enforcement [officials] out there who could use more U visas.”

LGBT rights: Republicans agree that organizations receiving federal grants shouldn’t discriminate against people on the basis of sexual orientation. They just don’t understand why Democrats want to make it the law.

“I agree that shelters and other grant recipients should provide services equally to everyone,” said Grassley. “But advocates of this provision haven’t produced data that shelters have refused to provide services for these reasons.” He added that the nondiscrimination provisions were “a political statement that shouldn’t be made on a bill that is designed to address actual needs of victims.”

Supporters of the bill disagree, pointing to surveys of domestic violence service workers who say they’ve seen victims turned away on the basis of gender identity or sexual orientation. But Grassley didn’t simply try to amend the bill to take out the LGBT-non discrimination provisions—his substitute bill lacks language that would have compelled public colleges to collect data on hate crimes based on gender identity.

“The Hate Crimes Statistics Act already compels the FBI to collect statistics based on a range of [factors], including gender identity” says Ian Thompson of the ACLU. “If it’s okay to make the FBI collect these statistics, it should certainly be okay to make colleges do it.”

The Violence Against Women Act reauthorization still retains a bipartisan pedigree. Six Republican senators—Mike Crapo (Idaho), Mark Kirk (Illinois), Lisa Murkowski (Alaska), Olympia Snowe (Maine), Susan Collins (Maine), and Scott Brown (Massachusetts) have all signed on as cosponsors. Even Grassley, armed with all his amendments, insisted in his floor speech that he wants the bill to pass.

Still, standing in the way of the Violence Against Women Act is a strange decision for a party that’s spent the last few weeks playing defense on women’s rights issues. The bill is expected to come to the Senate floor sometime this week.

“It’s unclear how it’s going to play out,” a Senate Democratic aide told Mother Jones. “In the past we’ve never had to have a big debate about this.”