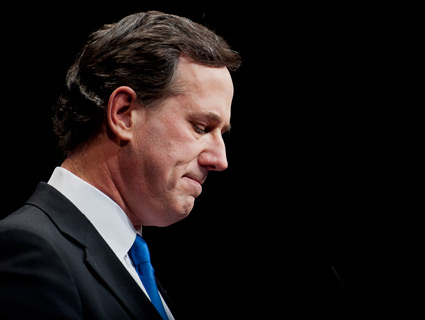 Rick Santorum’s pitch to Republican voters is simple: He is the “true” and “consistent” conservative in the GOP’s presidential nomination fight. He describes himself as “a candidate who, throughout [his] career, has not only checked the box on conservative issues but has fought for conservative issues.” And he slams front-runner Mitt Romney for flip-flopping on abortion and the Wall Street bailouts and, most of all, for passing government-mandated health care reform in Massachusetts. If elected president, Santorum vows, he will end the “tyranny” of President Obama’s Affordable Care Act.

Yet as an up-and-coming congressman in the early 1990s, Santorum took a much different line. Then—like now—health care was one of the nation’s most divisive issues. In 1993, Republicans were up in arms about a health care reform bill spearheaded by Hillary Clinton and pushed by President Bill Clinton. Republicans decried the measure as excessive government intervention in the marketplace, and Santorum opposed the legislation. But his position was not so clear-cut.

During that fiery debate, Santorum said it would be a mistake to allow the delivery of health care services to be determined only by the market. He asserted that Republicans were “wrong” to let the marketplace decide how health care works. He instead argued that government should play a “proactive” role in shaping the health care marketplace “to make it work better.” (Santorum spokesman Hogan Gidley did not respond to requests for comment.)

Santorum’s call for more government intervention in health care came during a December 1993 appearance on a Pittsburgh TV program, The Editors, hosted by the Pittsburgh Post-Gazette‘s Jane Blotzer and John Craig. At the time, Santorum was running in a Republican Senate primary and looking to challenge Democratic incumbent Sen. Harris Wofford. Mother Jones obtained a previously unreported transcript of the interview made by staffers for the Wofford reelection campaign. In 1994 Santorum eked out a narrow win over Wofford, 49 percent to 47 percent, in a bitterly fought race that gained national attention.

In the 1993 interview, the 35-year-old Santorum sounds little like the unflinching conservative he claims to be today. He describes his voting record in the US House of Representatives, where he represented the eastern suburbs of Pittsburgh, as “pretty much in the middle” compared with the rest of the Pennsylvania delegation, which included 11 Democrats and 9 other Republicans. His record, he went on, was “pretty compatible” with that of Arlen Specter and the late John Heinz, both moderate Republican senators from Pennsylvania. (Specter later switched to the Democratic Party.)

In the interview, when asked about the role of government in Americans’ lives, Santorum responded, “I believe that the federal government should set up a system where we create the right incentives for you to make efficient choices.”

Santorum said of health care in 1993: “A lot of folks believe, ‘Well, just keep government out of it.’ I don’t believe that.”

On health care, as he called for more government involvement, Santorum said Republicans had “dropped the ball” by not making health care reform a headline issue in recent elections. “I even said it to President Bush when he came to Pittsburgh to campaign for Dick Thornburgh [then running for US Senate] in 1991, that health care was gonna be the big issue and that we had to take responsibility for trying to solve this problem,” Santorum said. “We can’t continue to ignore it and say, ‘Oh well, you know, it will work itself out in the marketplace.’ That’s wrong.”

Government intervention, he continued, was key to creating a functioning health care marketplace. “The government helps set the marketplace up, so we have some responsibility to alter that marketplace to make it work better.”

Talking about health care, Santorum explained: “I take a much more proactive position in government in solving problems than most Republicans, because I believe government has a role. A lot of folks believe, ‘Well, just keep government out of it.’ I don’t believe that.” He added, “I think government has a role in making sure that there is equal opportunity.”

On the campaign trail these days, Santorum denounces government and maintains that it is not government’s job to help those who are suffering (because suffering has its positive consequences, he contends). His top priority, he says, is repealing “Obamacare.” He also wants to privatize Medicare and eliminate the agency that oversees it. “You want the private sector out there competing, driving down costs, improving efficiency,” he said recently.

At a November 2011 debate, Santorum boasted about his unwavering conservative record on health care. “I was always for having the government out of the health care business,” he said, “and for a bottom-up, consumer-driven health care, which is different than Governor Romney and some of the other people on this panel.” Yet Santorum, who has attacked Romney for reversing his positions, has flip-flopped as well.