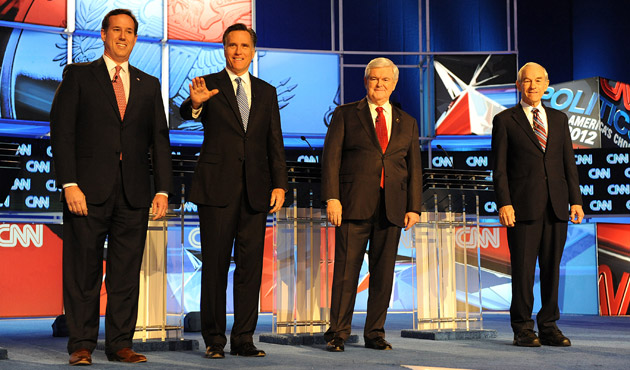 While awaiting Ohio final result, fill the time with Mother Jones “are you a slut?” flowchart bit.ly/xCvSlf

Are there an unusual number of good songs about Ohio, or do I just notice because it’s my home state?

While we wait on Ohio, don’t sleep on the delegate race in Georgia:

In terms of delegate count, whether Santorum crosses 20% in Georgia is more important – and more suspensful at moment – than who wins Ohio.

With the candidates done giving speeches, all eyes turn to Ohio:

Wolf: If Romney loses popular vote in Ohio, “this race is going on and on and on.”

Team Romney clearly nervous OH is not going their way, getting the candidate out much earlier than many of us believed

On Intrade, Romney falls below 50% to win Ohio, for the first time in more than a week.

Underneath that beautiful smile Mitt Romney is a hot mess. #cryingontheinside

Santorum takes the stage in Ohio:

Glad Santorum’s clarifying that the people behind him are his family. Otherwise might think he just couldn’t find any non-white supporters.

What Santorum doesn’t want you to hear about tonight, Ohio? It’s right here in The Santorum Files >> mojo.ly/xA0awI

Seriously, this is one of the most delusion election night speeches I’ve seen. He only proved home state GOPers don’t hate him. #SuperTues

Favorite shot of the night so far, this kid/mini-me of guy behind him at Gingrich rally. Elementary school president? twitter.com/thegarance/sta…

So, The Brain was based on Newt, right? “Same thing we do every night, Pinky. Try to take over the world.” ow.ly/i/uLBc

I hope, at the very least, that Newt Gingrich gets to host SNL when this is all finished.

Do superPAC rules prevent newt from using the Adelson money on an editor?Because he needs one real bad.

I entered the Santorum primary night party in Steubenville right after a man who looked identical to Buster from Arrested Development.

Interesting music choice at @RickSantorum rally in Steubenville: I Like it Like That by Hot Chelle Rae.

His old haunt of Massachusetts goes to Mitt, but he’s hardly dominating the night:

CNN has called Massachusetts — 38 delegates — for @MittRomney. No surprise there.

@DavidCornDC Yes. Romney won MA despite rejecting the endorsement of the last GOP governor of the state. #SuperTues #supertuesday

So our front runner continues his losing streak of evangelicals, the South, and most most conservatives.

It’s like a tough battle between the NY Yankees and yr son’s Little League team. May go to extra innings.

Large number of people who smoke weed seems to have high correlation with states where Ron Paul does well.

Paul looks likely to get about 40% of vote in Virginia — a fairly strong protest vote against Romney. #2012

RT @jeremyscahill: With 75% of the Four Horsemen of the Apocalypse reporting, CNN projects Rick Santorum will win the Book of Revelation

The Ohio picture begins to come into focus:

Huh: So far more votes for Obama in OH tonight than for all Republicans (who have actual campaigns) combined vote.sos.state.oh.us/pls/enrpublic/…

Romney’s perfect record of losing evangelical vote continues in Ohio, according to exits.

EXITS: Romney polls well in Ohio among men, and those who are not men, they are DEVO

Bold prediction: If Gingrich can find 20 other states where he served in Congress for 2 decades, he will be the nominee.

.@MittRomney victories called in Vermont and Virginia. Shaping up to be a good night for the Mittster.

If you figure CNN has 8 pundits for 6 hours at one opinion per five minutes, that comes out to OH KILL ME NOW.