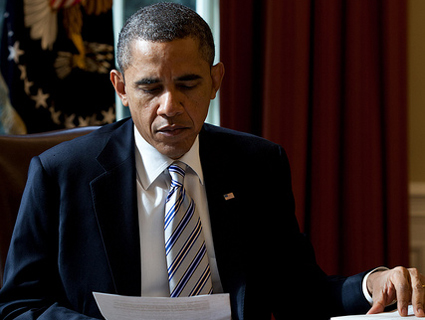 President Obama delivered a fiery (as we journalists like to call such things) speech to a gathering of newspapers editors in Washington on Tuesday, chiding Mitt Romney for using words like “marvelous” and knocking GOP Rep. Paul Ryan’s budget plan as “social darwinism.” It was, by most accounts, a sign of what’s to come from the campaign over the next seven months. Let’s hope this fact-check of the speech from the Associated Press isn’t also a harbinger of the future. (“It’s not even 10 A.M. and we already have a ‘worst of the day’ winner,” tweets Pema Levy.) The problem with the piece, by the normally solid Calvin Woodward, is that it doesn’t really check any facts (inflated jobs figures, spending increases, that kind of thing). Instead, it suffers from a massive glut of false equivalence. For instance:

This is somewhat true. In a campaign ad, West Virginia Sen. Joe Manchin actually shot a piece of cap-and-trade legislation to demonstrate how much he hated the idea of a market for carbon credits. (He really dislikes them!) But although a small fraction of Senate Democrats opposed cap-and-trade, the entire Republican caucus opposed it. As Ryan Lizza explained, there are complicated process-related explanations for why climate legislation failed, but on a sheer mathematical level, Republicans blocked it.

But that wasn’t actually a shift to the left. As a candidate, Obama campaigned on a public option. Progressives were devastated when it was nixed from the Affordable Care Act—to the extent that some refused to support the final bill. Instead, Obama went with the market-driven approach favored by the Republican governor of Massachusetts. Why? Well, in part because Iowa Republican Sen. Chuck Grassley suggested there would be “broad bi-partisan support” for such a solution. Can you really knock someone for moving to the left when they started off on the left and ended up where the center used to be?

The fact-check goes on to rebuke Obama for accusing Republicans of wanting to toss out lots of economic regulations (something Republicans want to do) by pointing out that Romney himself doesn’t want to literally eliminate every federal regulation—only a lot of them, including the Dodd–Frank Wall Street reform package, which was designed to prevent a repeat of the practices that led to the 2008 crash. But Obama didn’t actually say Romney wanted to eliminate all federal regulations—only a lot of them.

A sense of nuance is helpful when writing about Washington politics—and nuance, incidentally, is something campaign speeches generally lack. But fact-checks are for objective facts, not subjective arguments about what does and doesn’t constitute excessive deregulation. Pieces like this sort of defeat the point.