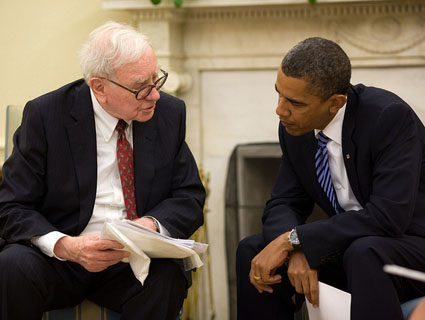 On Tuesday, First Lady Michelle Obama will jet off to Omaha, Nebraska, where she’ll attend an Obama campaign fundraiser. Hosting the Omaha event (attendees who donate $5,000 can meet and take a photo with the First Lady) will be none other than Warren Buffett, the “Oracle of Omaha,” an Obama campaign official told Mother Jones. And joining Michelle Obama and Warren Buffett at the Omaha fundraiser will be Susie Buffett, Warren’s daughter and a philanthropist herself.

President Obama turned to Warren Buffett when naming his plan to raise taxes on those earning a million dollars or more a year. And in 2012, Obama has used the so-called Buffett Rule—and Republican opposition to it—as a hammer with which to bash Republicans and as a way to highlight Mitt Romney’s support for lowering taxes on the rich. Obama only amped up the criticism after the Senate killed the Buffett Rule in mid-April.

But Obama’s use of the Buffett brand extends beyond policy and politics—and into the 2012 campaign cash fight.

In addition to Buffett family appearances at fundraisers, President Obama, Vice President Joe Biden, the First Lady, and their allies have repeatedly invoked the Buffett name on their travels around the country to raise money for the president’s re-election effort. Obama campaign manager Jim Messina has also highlighted the Buffett Rule in emails to supporters asking for donations. (An Obama spokesman declined to comment for the story.)

Last September, Warren Buffett headlined an Obama fundraiser at the Four Seasons restaurant in midtown Manhattan. The event, billed as an “economic forum” with Buffett as the expert and former Obama aide Austan Goolsbee as the moderator, asked for up to $35,800 to be a “host.” To get in the door guests needed to pony up a minimum of $10,000 a head. The biggest donors enjoyed a “VIP reception” with the Oracle of Omaha himself.

For Tuesday’s Omaha fundraiser featuring Warren and Susie Buffett, an Obama campaign official said approximately 200 people were expected to attend. Ticket prices started at $250 a person, with all money raised going to the Obama re-election effort.

That Obama would turn to Buffett to name his tax plan and rustle up campaign money is no surprise. The two men have had a relationship for years, and Buffett backed Obama during the younger man’s run for US Senate in Illinois. Buffett gave $5,000 to Obama’s political action committee in the 2006 election cycle, and Buffett also held a fundraiser in Omaha in August 2007 for Obama.

The president and his backers frequently invoke the Buffett name—almost always when discussing the Buffett Rule—as they rustle up money for the 2012 election. Warren Buffett, the Buffett Rule, or Buffett’s secretary have been mentioned more than a dozen times at fundraisers dating back to last September. At a February 23 fundraiser at the home of bundler Chris Korge, Obama said, “When it comes to paying for our government and making sure the investments are there so that future generations can succeed, everybody’s got to do their part. That’s why I put forward the Buffett Rule.” And at a March 16 fundraiser at Chicago’s Palmer House Hilton hotel, where tickets started at $2,500, the president said Warren Buffett “is quite pleased I named the rule after him.”

Numerous email blasts to Obama supporters have highlighted the Buffett Rule—and then asked for donations. A September 21 email from Jen O’Malley Dillon, Obama 2012’s deputy campaign manager, praised the Buffett Rule as a popular, common-sense plan that “too many millionaire politicians don’t have the guts to propose.” O’Malley Dillon’s email later urged supporters to “pitch in $5 or more” to boost the president’s campaign.

On April 9, Jim Messina, Obama 2012’s campaign manager, described how Warren Buffett pays a lower tax rate than his secretary—a common argument deployed by Obama on the stump. Messina directed supporters to a campaign website emblazoned with the call to “Pass the Buffett Rule” and asking visitors to enter their email and zip code. Those who did were sent to an online fundraising page asking for donations as small as $15. A third Obama campaign email also sought to rake in donations off of Mitt Romney’s opposition to the Buffett Rule, among other positions of Romney’s.

As a policy plan, the Buffett Rule is dead. But you can bet that, as the campaign heats up, Obama will use the rule as a way to whack Romney and congressional Republicans—and to rake in money for his re-election fight.