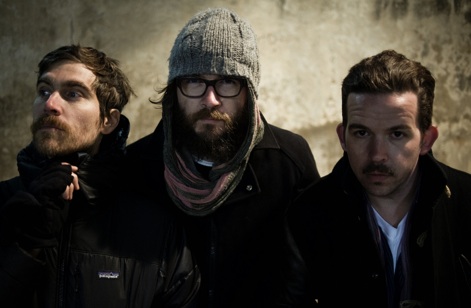 These days, there’s no shortage of Brooklyn-based bands playing music in a familiar vein of gauzy, techno-inflected indie (not to mention plenty of bands with the word “bear” in the name), but Bear in Heaven’s work nevertheless makes an impression. The band has gone through several iterations since frontman Jon Philpot released a collection of solo recordings as Tunes Nextdoor to Songs in 2003, and the current lineup features Philpot on guitar and vocals, Adam Wills on guitar and bass, and Joe Stickney on drums. After releasing 2010’s Beast Rest Forth Mouth to widespread acclaim, the band took a couple of years to make their third full-length, I Love You, It’s Cool—but the time paid off in a rich album that explores various configurations of electronic sound within the structure of carefully arranged songs.

The spacey swirls of “Idle Heart,” for example, might get lost in themselves if not for the brisk beat and rhythmic bass that they loop around. “The Reflection of You” starts with a burst of distorted sound and flutteringly high synths that give way to deeper, more sustained tones as Philpot sings “if you could get next to me I would have nothing left to prove”; towards the end, his high, echoing voice gets deeper and ominously distorted as he repeats “dance with me.” “Sinful Nature” is another song that starts out dance-y—though lines like “you’re let down by God/you’re let down by boring strangers” don’t exactly connote a night out at the club. On “Kiss Me Crazy,” a similar combination of staccato electro beats and sustained undertones makes Philpot’s longing palpable as he sings “so go ahead and kiss me crazy.”

Ultimately, Bear in Heaven’s problem is less sounding like someone else than sounding like themselves: Though there are a few standout tracks, songs run into one another at times, and the album’s cohesion occasionally crosses into simple sameness. But with repeat listens, of what initially seems like a 44-minute block of swirling, stuttering synths with occasional anthemic bursts start to emerge. (If you prefer your electronic music monotonous, though, Bear in Heaven’s got something for you, too: in March, the band previewed the new album by slowing it down 400,000 percnt to produce over 2,700 hours of drone—112 days worth—and putting the whole thing online.) They’re on tour through the spring and summer across the US and Europe; check them out if you’re looking for electropop that’s more measured and thoughtful than most.