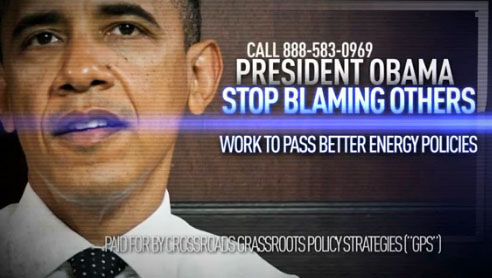 An anti-Obama ad paid for by dark-money group Crossroads GPS.

Want to peruse Mitt Romney’s donor list? See who’s on a super-PAC’s payroll? Find out which campaign spends the most on Chinese take-out? All that information and more is a click (or four) away on the internet.

However, political advertising information—who’s buying ads, where they’re buying them, and how much they’re spending—remains in the pre-computer age. That information is only available on paper forms stuffed inside filing cabinets at the offices of the broadcasters themselves. These files are public information, yet they are nowhere to be found online. Reporters or citizens looking for ad buy information have to call up individual broadcasters or visit TV stations in person.

No more. The Federal Communications Commission on Friday ruled that TV stations must post online their publicly available political ad information, including who’s buying, what they’re paying, and how much airtime they purchased. TV ads remain the most potent (and pricey) weapon in a campaign’s arsenal, and making ad data readily available online is a game-changer for reporters covering the campaign.

There’s a catch. The FCC’s requirement impacts only the nation’s 50 biggest TV markets, exempting the remaining 160. As the Sunlight Foundation recently noted, TV markets in battleground states such as Iowa, Virginia, and Missouri won’t be touched by the FCC’s decision. Meanwhile, broadcasters in Los Angeles and New York, both cities where President Obama is expected to win easily, will be subject to the new online requirement.

Still, supporters of the online move hailed the decision as a step out of the shadows for political advertising and win for transparency. “This is a huge victory for the public interest and a critical breakthrough for transparency in an election year,” wrote Candace Clement of Free Press, a media reform group that lobbied for moving ad info online. “At a time when wealthy special interests are trying to buy elections, we now have a means to figure out how much they’re spending on these ads, and where.”

The National Association of Broadcasters, the industry’s main trade group which lobbied against the proposal, said in a statement that it “respectfully disagrees” with the FCC’s ruling. “By forcing broadcasters to be the only medium to disclose on the Internet our political advertising rates, the FCC jeopardizes the competitive standing of stations that provide local news, entertainment, sports and life-saving weather information free of charge to tens of millions of Americans daily.”