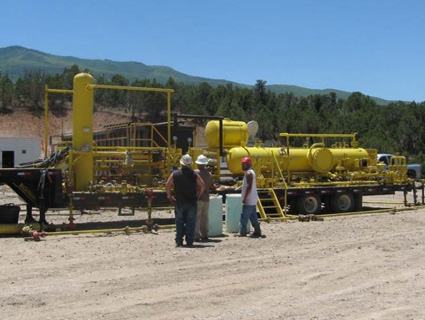 The Obama administration took a heavy swing in the ongoing battle over fracking today by imposing new rules that would, for the first time, restrict the release of smog-causing pollutants from natural gas wells. But the law turns a blind eye to greenhouse gases released by fracking; the EPA admits fracking accounts for 40 percent of the nation’s overall methane (an even stronger greenhouse gas than carbon dioxide) emissions.

By 2015, all fracked wells will be required to implement “green completion” equipment, which catches toxic gases like benzene on its way out of the earth and into the atmosphere. But the rule does not directly limit emissions of greenhouse gases.

David Doniger of the Natural Resources Defense Council said the EPA’s move to exclude greenhouse gases from the ruling was likely political: “If you’re controlling toxic air pollutants, right-wing ideologues are back on their heels, but when the EPA goes after climate change, all the right-wing nuts come out of the woodwork.” Still, Doniger stressed that while the rule could have gone further, the mandated equipment would indirectly take a big bite out of methane emissions.

The announcement has already excited many in the areas of Pennsylvania where fracking is a fact of daily life. “As a resident near a gas field, air pollution is way scarier than water well contamination,” said Susquehanna County environmental organizer Rebecca Roter, referring to the other major concern many locals have about fracking.

Matt Walker of Pennsylvania’s Clean Air Council stressed that while the rule is a boon for health concerns, further regulation was needed to curb the release of gases, like carbon dioxide and methane, that contribute to global warming. “We need to keep pushing,” he said. “We hope the EPA will set standards for greenhouse gases in the future.”

Gina McCarthy of the EPA said the mandate would yield a 90 percent reduction in air pollutants released as a byproduct of the fracking process at some 13,000 gas wells nationwide.

“Green completion” equipment is already mandatory in some states, and is already in place at nearly half the nation’s natural gas wells, McCarthy said, but the three-year rollout period was requested by industry leaders to allow all well operators time to purchase, install, and train employees on it.

The move came with the support of the American Petroleum Institute, a natural gas industry group. A spokesperson for API said the technology was originally developed by the industry, and that API is “glad to see that EPA adopted it for the rule.”

Gas well operators will be able to treat and resell the captured gases, McCarthy added, creating a new revenue source to offset the cost of implementing the new equipment.

As an interim measure in the two and half years before the new rule takes effect, the EPA said it will also mandate wells to use flaring, already a common industry practice, to burn off many of the toxic pollutants.

Whatever the shortcomings of the new rule, Walker said locals are glad to see the EPA taking a stronger stance on fracking: “People are excited that the EPA is finally setting standards for the pieces of equipment they see in their backyards.”