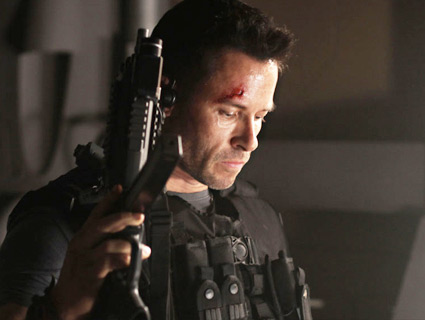 Guy Pearce: preparing to massacre his talent agency after seeing the final cut of his new movie.Photo courtesy of <a href="http://www.lockoutfilm.com/lockout-photo-gallery/">Open Road Films</a>

Lockout is by far the best movie ever made about a disgraced ex-CIA agent—who’s taken the fall for a crime he did not commit—who reluctantly infiltrates a supermax space prison—that’s been overrun by 497 cryogenically–frozen prisoners—in order to rescue the president‘s leggy blonde daughter—who’s been taken hostage during her liberal humanitarian space mission to investigate prisoner abuse—from a pair of Welsh–Irish–Scottish sibling archvillains, as said space jail hurtles towards earth’s atmosphere. It’s also likely the best movie ever made that takes place in the year 2079.

And that’s about the nicest thing anybody can say about it.

Where to begin? The movie, conceived and executive produced by action maestro Luc Besson (The Professional, La Femme Nikita, The Fifth Element), should have been awesome. Need I remind you that it’s about rescuing the president’s daughter…in space? Pulling off such a premise should’ve been foolproof precisely because all a filmmaker has to do to make a movie better is tack on the words “in space” to the end of the title:

No luck. The premise isn’t tackled with any playfulness or irony, the delightfully dumb satire isn’t consummated, the dialogue is plain weird, and the relatively bloodless action looks like silly outtakes from the Max Payne 3 game trailer. What should have been an exercise in intentional, glorious cheese somehow—in the hands of directors James Mather and Stephen St. Leger—instead plays out as…unintentionally glorious cheese.

And therein lies the upside to wasting your hard-earned money to see Lockout: It blows through the flat-out shitty line and enters the pantheon of so-bad-it’s-good movies. It’s hard not to marvel at how anyone managed to create a movie this mind-blowingly awful. Were the filmmakers trying to set some kind of record? Were the entire cast and crew going through severe Dilaudid withdrawal during production and post-production? Is this real life?

We may never know the answer, but it’s hard to argue with the inadvertent hilarity. According to Lockout, in 2079, Washington, DC is a destroyed, barren wasteland and the Oval Office has been moved to an underground bunker—which is all well and good, except that the movie never explains why. The head of the Secret Service (played by the ever-slick-haired Peter Stormare) inexplicably has a thick Russian accent. You keep expecting a plot twist that reveals him to be KGB spy for a resurrected, futuristic Soviet empire, but such a twist never materializes! And when the hero Snow (Guy Pearce) and the damsel-in-space-distress Emilie (Maggie Grace) have to evacuate the prison in nothing but astronaut-wear, they leap in the direction of continental North America, make it through that really unfriendly atmosphere like it ain’t no thing, open their parachute a couple seconds before impact, and land on the DC beltway like children plopping down on a bean bag chair.

Just as amazing is the film’s take on politics. The mega-prison, known as MS-1, is the controversial product of privitization and a faceless corporate entity that puts profit before human rights. Inmates are held in a form of solitary confinement that causes dementia and searing pain. Snow frequently riffs on the perils of global warming, high taxes, and “Congress screwing the pooch.” And in a particularly tense moment, the president is removed from office after the Secret Service chief invokes the 25th Amendment….via an iPad.

Again: none of this feels like it was intended to be funny. But it’ll leave you in stitches, anyway.

Somewhere, the ghost of Ed Wood is cracking a very wide smile.

Lockout gets a wide release on Friday, April 13. The film is rated PG-13 for intense sequences of violence and action, and language including some sexual references. Click here for local showtimes and tickets.