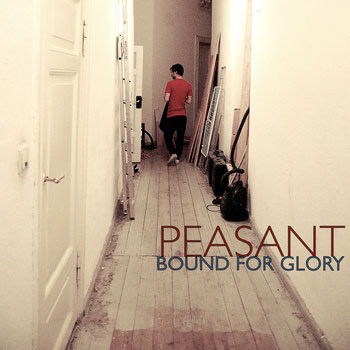 Damien DeRose, the 25-year-old at the heart of the indie trio Peasant, started making music as a teenager living in small-town Bucks County, Pennsylvania. He produced his first three albums—Fear Not Distant Lover, On the Ground, and Shady Retreat—largely on his own before bringing in bassist Bruno Joseph and drummer Alex Bortnichak for a more robust sound on the just-released Bound for Glory.

DeRose’s delicate acoustic songs have earned him frequent comparisons to the likes of Elliott Smith and Nick Drake, but he’s tried to distinguish himself from the continuous stream of indie-folk types. He told Paste he chose the Peasant moniker in an attempt to escape the ubiquitous “singer-songwriter” label, hoping that a more distinctive name would help him define his work as part of an ongoing artistic project. The name itself, he said, came from the famous line in John Lennon’s “Working Class Hero“—”But you’re still fucking peasants as far as I can see”—a choice he thinks makes a subtle statement about inequality in America while simultaneously conveying the band’s simple aesthetic.

So does Peasant succeed in standing out from the pack? It depends: the band’s music occasionally borders on the forgettably twee, as on the cloying “A Little One,” while a couple of songs, like “Gone Far Lost” and “Mother Mary,” cross the line from sleepy charm to soporific lull. Other songs are captivating despite modest ambitions: “Amends” is slight, but DeRoses’s lilting vocals, in tandem with effervescent guitars, give it a quiet charm; likewise for the quavering vocals and sprightly cadence of “Take It Light.”

But Peasant is at its most interesting, and most memorable, when its members aim for more forceful fare, as on “Pretty Good,” a fully-fledged indie rock track tinged with elements of country, or “Doesn’t Mean,” which twangs richly as DeRose sings “I just want my heart back/from what I gave to you.” The languid, persistent beat and sharply punctuated vocals of “Girls” add a welcome note of edge, while the catchy, peppy melody of “The Flask,” overlaid with DeRose’s near-falsetto, stands out as a wistfully sunny pop-folk gem.

Still, the album’s title at first seems a misnomer—Peasant is pleasant listening, to be sure, but glory hardly seems to be on their radar. As it turns out, though, Bound for Glory is another nod to DeRose’s musical influences—in this case, to Woody Guthrie’s autobiography. Seen in that light, the title track is a fitting homage to the legendary folkie: DeRose sings pensively of rambling “where the road goes/where the river knows” over softly strummed guitar, assuring us that he’s headed for better things.