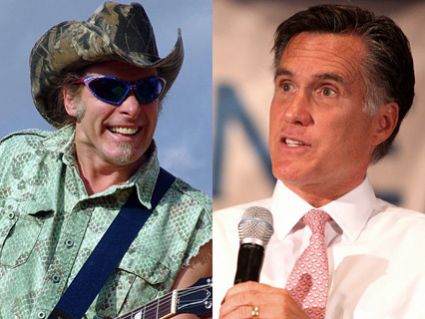 Ted Nugent‘s violent remarks at the NRA’s annual paranoia-fest triggered (pun intended) a new round in the always-good-for-cable debate over extreme rhetoric in the political discourse. The episode showed—no surprise—that GOP presumptive presidential nominee Mitt Romney was unwilling to condemn an out-of-bounds Obama-hater when his campaign released a mealy-mouthed response to the uproar, ignoring Nugent’s specific comments and noting that “Mitt Romney believes everyone needs to be civil.” And Nugent’s threatening words were nothing new; in 2007, he held up two machine guns at a concert and told Obama to “suck on my machine gun,” adding, “Hillary, you might want to ride one of these into the sunset, you worthless bitch.” But his latest rant, in which he denounced Obama’s “vile, evil America-hating administration,” was part of a never-ending Republican/conservative crusade to portray the president as not a true American. And it’s an effort that Romney has played footsie with.

For years, conservatives have said (or implied) that Obama is not really one of us: He was born in Kenya, he’s a secret Muslim, he pals around with terrorists. They have also endeavored to attach this otherism to all Democrats. Ex-presidential candidate Rep. Michele Bachmann (R-Minn.) accused Obama and his wife of holding “anti-American views” and called on the media to investigate Democratic members of Congress to determine if they were anti-American, too. Last week, Rep. Allen West (R-Fla.), a tea party darling, declared that “there’s about 78 to 81 members of the Democratic Party that are members of the Communist Party.” After he was lambasted for uttering this absurd charge, he defiantly proclaimed that he did not regret his statement and reaffirmed his stance: “I’m not going to back down. I’m not going to be afraid about the fact that I called a spade a spade.” (House Speaker John Boehner said nothing about West’s derogatory and fact-free claim.)

Labeling anyone left of center a commie or traitor who hates America is a time-tested tradition of conservative politics that stretches back decades, from the Palmer Raids to the McCarthy era to Richard Nixon’s criminal administration to Ronald Reagan’s attempt to smear the anti-nuclear movement as a Moscow spin-off. Romney is too moderate (and too fearful of losing independent voters) to engage in DEFCON-1-level rhetorical nuking. But he has devised a way to speak to—and exploit—this sentiment without contracting cat-scratch fever.

Romney routinely criticizes Obama as someone who neither likes America nor gets it. In his book, No Apology: The Case for American Greatness, Romney decried Obama for repeatedly apologizing for “American misdeeds, both real and imagined.” (He didn’t explain what was wrong with apologizing for real misdeeds.) PolitiFact.com judged Romney’s claim “false.” Yet this untrue accusation has been a steady theme of Romney’s campaign. At a speech earlier this month to the Newspaper Association of America, Romney asserted that Obama failed to rescue the US economy in his first years in office because he was too busy “apologizing for America abroad.” Romney’s point is obvious: Real Americans don’t apologize for America.

Obama the Apologizer is not Romney’s only jab designed to depict the president as apart from the great American public. He repeatedly charges that Obama does not truly understand this nation or grasp that America is special. As if Obama were an outsider. A few examples:

* In May 2011, Romney delivered a speech—accompanied by a PowerPoint presentation—to defend the health care plan he implemented in Massachusetts as governor and to criticize Obamacare. One of his slides read: “The Obama Administration fundamentally does not believe in the American Experiment.” That was a rather broad statement—especially about the biracial son of a Kenyan and a Kansan who became the first African American president of the United States.

* On the stump last November, Romney said, “Sometimes, I just don’t think that President Obama understands America. I say that because this week—or was it last week?—he said that Americans are lazy. I don’t think that describes America.” Of course, Obama had not called Americans lazy. He had said that US policymakers had become lazy in promoting the United States as a outstanding opportunity for foreign investment.

* In an address to the Republican Jewish Coalition forum in December, Romney contended, “I don’t think he understands America.” Romney explained further: Obama did not realize that American “society gathers and creates a citizenry that pioneers, that invents, that builds, and creates.” Yet Obama often talks about investments and innovations as part of a winning-the-future agenda.

* Campaigning in New Hampshire in January, Romney again repeated this mantra—Obama “doesn’t understand America”—and maintained that his “agenda will make us a European welfare state.” With this version of the charge, Romney was making it seem as if Obama was an anti-American who’s plotting to Europeanize the country.

* This week, during an interview with Diane Sawyer of ABC News, Romney repeated his assertion that Obama “doesn’t understand” America’s economy. This has become a catchphrase that Romney often doesn’t bother to explain.

Romney doesn’t call Obama a commie. He doesn’t question his birthplace. He doesn’t say the president is a criminal. He doesn’t suggest he’s Muslim-y. He doesn’t declare that Obama hates America or harbors anti-American views. But Romney has welcomed the backing of those who make these types of claims, and he has even courted these over-the-top Obama foes (as he did with Nugent, after the gun-lovin’, aging rocker had violently threatened Obama and Hillary Clinton). He legitimizes and exploits those who engage in Obama hate-mongering and who debase the political discourse Romney claims to care about. More important, with his own words, Romney has attempted to reinforce the notion that Obama is not truly part of the nation he leads. He has mainstreamed the Obama-ain’t-really-American meme of the right. And that is hardly civil.