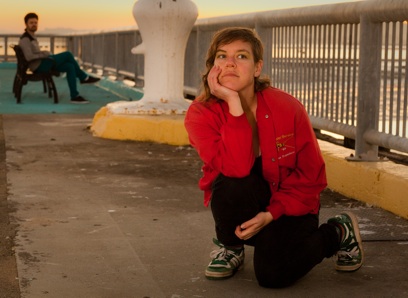 Going into a screening of Buster Keaton shorts to music by Merrill Garbus, the force behind tUnE-yArDs, I had no idea what to expect—but was willing to buy a ticket for anything Garbus did. By the time it was over, I was ready to sign up as a roadie. The pairing of tUnE-yArDs, Keaton, and avant-garde guitarist Ava Mendoza was inspired: Garbus’ eclectic, playfully physical music made for the perfect soundtrack to shorts full of pratfalls and zany stunts. And since tUnE-yArDs builds traditionally structured songs out of strange noises and sounds, it’s perfect for backing a film: soundtrack and sound effects all at once.

Though some of the show’s initial appeal came from the novelty of the dissonance between old movies and new music, the latter in some ways made for a more authentic experience: the original soundtrack to these types of films consisted largely of ragtime and jazz, which to modern audiences is familiar and old-timey, but at the time was viewed as strange, avant-garde, even dangerous. These are films meant to be paired with contemporary music, not classics.

And while Keaton’s shorts are remarkably timeless (albeit with occasional jarring notes, as when an Italian organ grinder shows up in blackface), they’re also pretty weird; Garbus’ music emphasized the surreal, almost psychedelic underpinnings of the cartoonish exaggeration that characterizes the silent film era. Fatty Arbuckle’s exuberant dancing becomes even more manic when set to a wild melange of sounds, and a haunted house is eerier with vocals looping in the background. Arbuckle’s mugging for the camera recalls the grotesquely distorted facial expressions from Garbus’ “Bizness” video (below), while the contrast between Keaton’s stoic deadpan and his slapstick gags is heightened by the chaotic swirl of instruments in the background.


While most of the score was composed specifically for the films, a couple of tUnE-yArDs songs fit in perfectly. “What’s a boy to do if he’ll never be a gangsta?” Garbus sang as a hapless group of bank robbers made a mess of an attempted stick-up in The Haunted House. In Good Night, Nurse!, Arbuckle tries to escape a team of ether-wielding doctors at a sort of sanitorium for alcoholics as Garbus sings “I’m addicted, yeah / don’t take my life away / don’t take my life away.”

The physicality and exuberance of tUnE-yArDs  also translates into a terrific live show sans Keaton. With her face paint and homemade costumes, it’s not hard to imagine Garbus as a vaudeville star in another era; she’s an extraordinary performer who knows how to use her body as an instrument and a prop, not to mention an incredibly warm host bent on making sure everyone has a good time. (It’s no surprise that she studied theater in college.) At last week’s tUnE-yArDs show at Fox Theatre in Oakland, the crowd was ecstatic; it’s been a long time since I’ve seen so many people smiling so much at a concert—particularly when Garbus brought out a quartet of kids to dance to “My Country.”