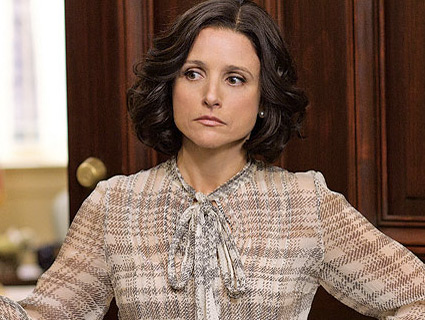 The new series, which premieres Sunday, April 22 at 10:00 p.m. EST on HBO, follows Vice President Selina Meyer (played by a tightly wound Julia Louis-Dreyfus) and her staff as they attempt to survive the tedium and intense disloyalty of the DC landscape. Meyer is constantly under siege from special interests and aging senators, all of whom are ready to crucify her at the first hint of a faux pas. Though the show doesn’t specify her political allegiance, she operates like a centrist Democrat. During the series’ first three episodes, her world is dominated by two pet causes: ramming a filibuster reform bill through Congress and assembling a “clean jobs task force.”

The show’s dark humor is in documenting the unglamorous and uncivilized path the VP has to travel in order to cobble together some semblance of progress. After Meyer pledges to replace plastic utensils with corn-starch utensils in “most federal buildings by the fall” as part of her green initiative, she incurs the wrath of the all-powerful plastics lobby, which is naturally a powerful offshoot of the oil lobby. (“The utensils are politicized,” an aide whispers in panic.) As her team scrambles for damage control, a senator reminds the VP not to “fuck with oil” because “they fuck in a very unpleasant fashion.” Suddenly Meyer is on the prowl for an oil lobbyist to install on her enviro task force, and with that, the series French-kisses civic idealism goodbye.

Veep gets Washington right in the same way Scrubs got medical professionals right: It doesn’t really, but then again, it really does.

As much as we all loved The West Wing, it did perpetuate a forgivable but outrageous fantasy: It presented most people working in politics as good human beings. In Veep, everybody (bureaucrats, journalists, influence-peddlers, taxpayers) is vulgar, vain, power-hungry, clumsy, petty, self-interested, self-loathing, and painfully oblivious to life outside the Beltway swamp.

Veep has a very simple take on our public servants: Practically all of them are douchey incompetents.

Most of the laughs come from the fact that Meyer and her fellow travelers talk like they’re still kids dishing gossip in the dormhouse. When the Veep isn’t deriding constituents as “fucking idiots” or referring to other politicos as “hog-fuckers” and “what’s-his-ass,” she’s calling her staff Tweeter a “retard“…during her speech at a high-profile fundraiser (a moment dubbed “Retardgate” by a senior spokesman). Her communications director Mike (a razor sharp Matt Walsh) compares his never-ending grunt work to being “the last guy on a Human Centipede.” And White House liaison Jonah (an equally amusing and scuzzy Timothy Simons) asserts his imagined dominance with a deadpan “I work at the White House, so I can just walk in and say, ‘I’m from the White House, what the fuck are you doing?'”

The show’s lampooning of the DC establishment is so entertaining precisely because the absurdity hits so close to home. For instance, when one of the VP’s allies in the Senate senses betrayal on the horizon, he threatens to use her aide’s “eye sockets as a sex toy,” a phrase that would feel right at home in Rahm Emanuel‘s lexicon.

The mordant, profanity-encrusted satire comes courtesy of creator and director Armando Iannucci, who utilizes the same model of scathing commentary he perfected in the BBC show The Thick of It and its 2009 spin-off movie In the Loop. Veep shows Iannucci’s knack for irony and whiplash one-liners in high gear, particularly during sequences of belabored PR trivia. Meyer’s staff spends hours determining what flavor of frozen yogurt she should order during a photo op—anything rum-tinged is deemed sexy and dangerous, while swirl flavors are said to exude “racial harmony.” Later on, they argue over what breed of canine companion would make her look less like a diva, only to discover that she can’t even get a dog because it would upstage the First Lady’s plan to buy one (“FDOTUS,” pronounced “eff-dough-tuss,” Jonah repeatedly calls it).

The series’ mischievous deromanticization of political elites is a welcome addition to the airwaves, and its rapid-fire sardonicism is a riot. In the Veep universe, a hell of a lot gets said and yelled, but nothing much gets accomplished. And for Veep‘s star, that should feel like positively familiar territory.