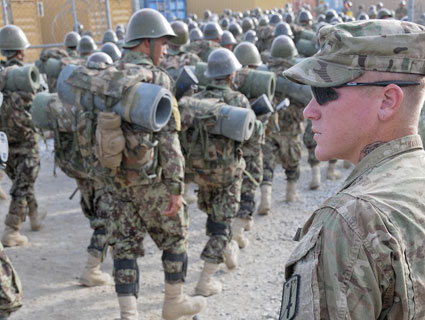 Recently, after insurgents unleashed sophisticated, synchronized attacks across Afghanistan involving dozens of fighters armed with suicide vests, rocket-propelled grenades, and small arms, as well as car bombs, the Pentagon was quick to emphasize what hadn’t happened. “I’m not minimizing the seriousness of this, but this was in no way akin to the Tet Offensive,” said George Little, the Pentagon’s top spokesman. “We are looking at suicide bombers, RPG [rocket propelled grenade], mortar fire, etcetera. This was not a large-scale offensive sweeping into Kabul or other parts of the country.”

Defense Secretary Leon Panetta weighed in similarly. “There were,” he insisted, “no tactical gains here. These are isolated attacks that are done for symbolic purposes, and they have not regained any territory.” Such sentiments were echoed by many in the media, who emphasized that the attacks “didn’t accomplish much” or were “unsuccessful.”

Even granting the need to spin the assaults as failures, the official American reaction to the coordinated attacks in Kabul, the Afghan capital, as well as at Jalalabad airbase, and in Paktika and Logar Provinces, reveals a fundamental misunderstanding of guerrilla warfare and, in particular, of the type being waged by the Haqqani network, a crime syndicate transformed by the conflict into a leading insurgent group. Here’s the “lede” that should have run in every newspaper in America: More than 40 years after the Vietnam War’s Tet Offensive, after more than a decade of war in Afghanistan, even after reviving counterinsurgency doctrine (only to see it crash-and-burn in short order), the US military still doesn’t get it.

Think of this as a remarkably unblemished record of “failure to understand” stretching from the 1960s to 2012, and undoubtedly beyond.

The Lessons of Tet

When Vietnamese revolutionary forces launched the 1968 Tet Offensive, attacking Saigon, the South Vietnamese capital, as well as four other major cities, 35 of 44 provincial capitals, 64 district seats, and 50 other hamlets nationwide, they were hoping to spark a general uprising. What they did instead was spotlight the fact that months of optimistic talk by American officials about tremendous strategic gains and a foreseeable victory had been farcical in the extreme.

Tet made the top US commander, General William Westmoreland, infamous for having claimed just months earlier that an end to America’s war was on the horizon. As he stood before TV cameras on the battle-scarred grounds of the US embassy compound in Saigon—after a small team of Vietcong sappers breached its walls and shot it out with surprised US forces—pronouncing the offensive a failure, he appeared to Americans at home totally out of touch, if not delusional.

Since that moment, it should have been clear that tactical success, even success in any usual sense, is never the be-all or end-all of insurgent warfare. Guerrillas the world over grasped what had happened in Vietnam. They took its lessons to heart, and even took them a step further. They understood, for instance, that you don’t need to lose 58,000 fighters, as the Vietnamese did at Tet, to win important psychological victories. You need only highlight your enemy’s vulnerabilities, its helplessness to stop you.

The Haqqanis certainly got it, and so just over a week ago sacrificed 57,961 fewer fighters to make a similar point. Striking a psychological blow while losing only 39 guerrillas, they are distinctly living in the twenty-first century in global war-making terms. On the other hand, whether its top civilian and military commanders realize it or not, the Pentagon is still stuck in Saigon, 1968.

Case in point: Secretary of Defense Panetta belittled the Haqqani fighters for not taking “territory.” It’s a claim that, in its cluelessness, is positively Westmorelandish.

What territory, after all, could a relatively weak and lightly armed force like the Haqqani militants have been out to “regain” by attacking Kabul’s heavily defended diplomatic quarter? The German Embassy? And then what would they have done? À la US counterinsurgency doctrine, launch an oil-spot strategy, spreading out slowly from there to secure the American Embassy, the British Embassy, and NATO headquarters? While Panetta at least granted that the attacks were geared toward symbolic effect, he remained strangely focused on their “tactical” significance.

As was the case in Vietnam, the US military in Afghanistan regularly attempts to prove it’s winning via metrics like the number of enemies captured and body counts from “night raids.” No less frequently, its spokespeople create rules and measures for its enemies in an effort to prove they’re not succeeding. This Westmoreland-ian mindset was evident last week in those statements that the Haqqanis didn’t accomplish much of anything because they didn’t take territory, sweep into Kabul en masse, or carry out a sufficiently “large-scale offensive”—as if the Pentagon were the war’s ringside judge (as well as one of the fighters) and the conflict could be won on points like a boxing match.

In the Vietnam years, Westmoreland and other top US officials were forever seeking an elusive “crossover point”—the moment when their Vietnamese foes would be losing more fighters than they could replace and so (they were convinced) would have to capitulate. That crossover point was the Pentagon’s El Dorado and to achieve it, the US military fought a war of attrition, just as in recent years the Pentagon has been trying to capture and kill its way to victory in Afghanistan through night raids and conventional offensives.

More than a decade after its own forces swept into Kabul, however, what began as a rag-tag, remnant insurgency has grown stronger and continues to vex the most heavily armed, most technologically advanced, best-funded military on the planet. All of America’s “tactical gains” and captured territory, especially in the Taliban heartland of Helmand Province in southern Afghanistan, however, haven’t led to anything close to victory, and one after another its highly publicized light-at-the-end-of-the-tunnel offensives, like the much-hyped 2010 Marjah campaign, have faded away and been forgotten.

As the Haqqanis meant to underscore with their coordinated attacks, America’s trillion-dollar military and the hundreds of thousands of allied local security forces are still incapable of fully securing a small “green zone” in the heart of the Afghan capital, no less the rest of the country.

The conflict in Afghanistan began with its American commander declaring, “We don’t do body counts,” but a quick glance at recent US militarypress releases touting supposed “high-value kills” or large numbers of dead insurgents indicates otherwise. As in Vietnam, the US is once again waging a war of attrition, even as America’s Afghan enemies employ their own very different attrition strategy. Instead of slugging it out toe-to-toe in large suicidal offensives, they’ve planned a savvy, conservative campaign meant to save fighters and resources while sending an unmistakable message to the Afghan population, and simultaneously exposing the futility of the conflict to the American public.

The attrition of US support for the war is unmistakable. As late as 2009, according to a poll by ABC News and the Washington Post, 56% of Americans believed the Afghan War was still worth fighting. Just days before the Haqqanis’ coordinated attacks, that number had sunk to 35%. Over the same span, the number of Americans convinced that the war is not worth fighting jumped from 41% to 60%. Whatever the Pentagon’s spin, the latest Haqqani offensive is likely to contribute to these trends, and Pentagon press releases about enemy dead are powerless to reverse them.

In the era of an all-voluntary military, of the “warrior corporation” and its warzone mercenaries, breaching the “green zone” of American public opinion matters less than in the Vietnam era, but it still makes a difference. The Haqqanis and their Taliban allies may be taking no territory, but in this guerrilla war it turns out that the territory that really matters, on all sides of the battle lines, is the territory inside people’s heads—and there the Pentagon is losing.

On April 12th, the same day that the ABC News/Washington Post poll was released, US Air Force Lieutenant Colonel James Routt flew his last combat mission in Afghanistan. It was a noteworthy flight. After all, Routt began his career flying B-52 bombers at the end of the Vietnam War, and was even involved in support efforts for Operation Linebacker II, President Richard Nixon’s infamous “Christmas bombing” of North Vietnam.

Just a few years after those raids, Nixon was a disgraced ex-president and America’s Vietnamese enemies had won the war. Decades later, the US stands on the brink of another, more devastating defeat at the hands of far lesser foes, a minority insurgency with weaker allies (and no great power backers). It’s an enemy that has fought far fewer battles and lost far fewer fighters, despite facing off against a far more sophisticated American war machine.

While Routt is hanging up his bomber jacket and walking away from another American defeat in Asia, the Pentagon continues its efforts to conjure up, if not victory then something other than failure, out of a mélange of money, dead bodies, and rosy press releases. The Haqqanis and their allies, on the other hand, having evidently learned the lessons of the Vietnam War, will undoubtedly continue their carefully controlled war of attrition, while Washington pursues the losing variant it’s been clinging to for years.

The Pentagon might have swapped the Vietnam Syndrome for an Afghan one, but its playbook remains mired in the Vietnam era. It seems intent on proving that channeling William Westmoreland is the least effective way imaginable to win a war on the Eurasian mainland.

Nick Turse is the associate editor of TomDispatch.com.  An award-winning journalist, his work has appeared in the Los Angeles Times, the Nation, and regularly at TomDispatch/a>. This article is the latest article in his new series on the changing face of American empire, which is being underwritten by Lannan Foundation.  You can follow him on Twitter @NickTurse, on Tumblr, and on Facebook. Follow TomDispatch on Twitter @TomDispatch and join us on Facebook. To stay on top of important articles like these, sign up to receive the latest updates from TomDispatch.com here.