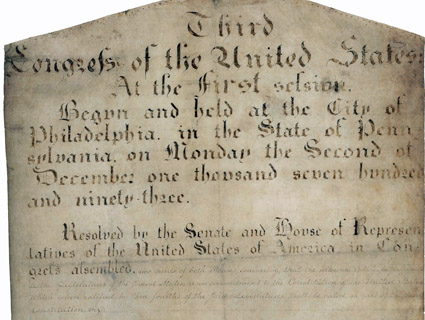 The 11th Amendment: The key to stymieing super-PACs? <a href="http://commons.wikimedia.org/wiki/File:11th_Amendment_Pg1of1_AC.jpg">Wikimedia Commons</a>

Last December, the Montana Supreme Court defied Citizens United by upholding the state’s century-old campaign finance laws. That decision could well be overturned when it comes before the Supreme Court, which stayed the Montana high court’s decision in February. But never fear, reformers: The Eleventh Amendment Movement (TEAM), an obscure group based in Hawaii, claims that Citizens United could be effectively overturned within the next two months.

Here’s part of TEAM’s argument, as laid out in an amicus brief filed with the Supreme Court: Because the plaintiff in the Montana case made a “technical error” by naming state Attorney General Steve Bullock in his official capacity, the 11th Amendment bars the Supreme Court from touching the Montana decision. The amendment affirms the principal of sovereign immunity, which prevents federal courts from interfering with lawsuits brought by individuals against state governments.

The group is represented by Carl Mayer, a New York lawyer who’s won cases against the likes of Nike and has been working on behalf of journalist Chris Hedges to strike down the indefinite detention provision of the National Defense Authorization Act. Last Wednesday, a federal judge sided with Hedges. (Mayer also unsucessfully sued the New England Patriots and NFL for $185 million on behalf of New York Jets fans, claiming that Patriots coach Bill Belichick rigged games by secretly taping opponents’ signals.)

At first glance, TEAM’s theory is intriguing. If the Supreme Court were to decline to hear the Bullock case, outside expenditure laws would “enter into a world of great confusion,” says Tara Malloy of the Campaign Legal Center. “On the one hand, Citizens United would still be standing as the law of the land.” On the other hand, she explains, states would have “quite a lot of wiggle room” to restrict corporate expenditures. That’s essentially the loophole TEAM hopes to open so that states may enforce or pass new campaign-finance laws that mitigate the impact of Citizens United. (Twenty-two states and Washington, D.C., are urging the Supreme Court not to touch the Montana Supreme Court decision.)

TEAM maintains that if five Supreme Court justices decide not to hear the Montana case, the state’s campaign-finance laws will be upheld. TEAM hopes to appeal to the states’ rights sympathies of at least one of the Supreme Court’s five-justice conservative majority, reasoning that he (plus the court’s liberal minority) might reject the case on 11th Amendment grounds, thereby acknowledging popular opposition to Citizens United while avoiding the burden of explaining away the previous ruling.

Does this approach have a chance of success? Not likely, says 11th Amendment expert Andrew Coan, an assistant professor of law at the University of Wisconsin-Madison. While the concept of state sovereignty does prohibit federal courts from intervening in suits seeking monetary damages against a state or its officials, the Supreme Court’s 1908 Ex parte Young decision (which TEAM argues is now too narrow to apply) allows it to prevent states from enforcing laws that are unconstitutional. “It’s necessary that a suit for injunctive relief be brought against the state attorney general in his official capacity, because otherwise any injunction that the court issued would run only to Attorney General Bullock personally, and if he left office his successor would be free to go ahead and enforce the law,” Coan explains.

Got that? (As even the Congressional Research Service concedes, “Eleventh Amendment jurisprudence has become over the years esoteric and abstruse and the decisions inconsistent.”)