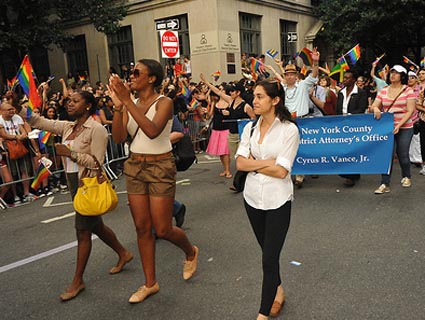 Black people aren’t willing to jettison their multigenerational aversion to the Republican Party over President Barack Obama’s embrace of marriage equality, according to the latest poll from Pew.

About half of Americans (52 percent) say Obama’s marriage stance didn’t affect their view of him, while 25 percent say it made them see Obama less favorably and 19 percent say they looked upon him more favorably. Those viewing Obama less favorably tend to be older and/or Republicans, the latter having finally decided that there’s definitely no way they’re voting for a communist Muslim who also endorses same-sex marriage.

The nation’s collective shoulder shrug, however, becomes even more pronounced among black voters, 68 percent of whom say their view of Obama was unaffected. The trend line for approval of same-sex marriage has risen sharply for Americans as a whole, and black voters are no exception: According to Pew study released in April, while 67 percent of black voters opposed same-sex marriage in 2004, the number has dropped to 49 percent. Opposition fell from 60 to 43 percent among Americans generally over the same period.

Perhaps even more indicative of the direction black voters are heading, a Washington Post/ABC poll released Tuesday shows a larger percentage of whites (48 percent) disapproving of Obama’s decision than blacks (37 percent) despite the fact that polls have consistently shown black voters more opposed to marriage equality on average. The fifty-seven percent of black voters who approve are even more likely to approve strongly (31 percent) of Obama’s decision than the population as a whole (28 percent). If I were to hazard a guess, I’d say that black voters, more favorably disposed towards the president, are more likely to see Obama as having taken a risky stance on principle even if they disagree with his conclusion.

Of course, both Pew and the WaPo/ABC poll have a relatively large margin of error among black voters (11 and 12 points, respectively) and it’s possible that getting hammered in the pulpits of black churches from now till November could erode Obama’s numbers and convince some of the president’s more conservative-minded black supporters to stay home. Ultimately, though, the number of black voters who decide to vote against Obama on the basis of same-sex marriage is most likely marginal, since from big-city mayors to members of Congress, we have yet to see a black Democrat ousted from office on the basis of his or her support for same-sex marriage. Black voters, like other Americans, are evolving on marriage equality pretty rapidly—if anything, Obama’s endorsement of same-sex marriage is likely to speed the process.