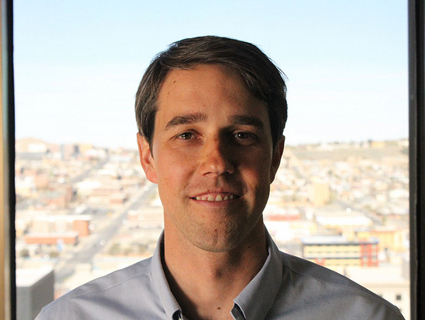 [Update: 10:36 PM PST, 5/29/2012: With all precincts reporting, Beto O’Rourke has knocked off Rep. Silvestre Reyes with 50.47 percent of the vote to win the Democratic nomination. He’s all but certain to win the November general election in his heavily Democratic district.]

When a new congressman heads to Washington from Texas’ 16th congressional district, he tends to stick around a while. The 16th, a border district that includes the city of El Paso, has been represented by just three men in 48 years; primary challenges are virtually unheard of. So it was noteworthy when, earlier this month, the area’s largest newspaper asked its readers to fire eight-term incumbent Rep. Silvestre Reyes.

In Reyes’ place, the El Paso Times recommended Beto O’Rourke, a 40-year-old former El Paso councilman who’s running neck and neck with the incumbent ahead of Tuesday’s Democratic primary. O’Rourke is an outsider in two key respects. He is a white man of Irish decent in a district that’s 77 percent Latino. And he is, as the author of a new book proposing the legalization of marijuana, an outspoken critic of federal drug policy. That makes O’Rourke’s clash with Reyes more than just a story of an insurgent taking on the machine—in a border district, the contest is partly a referendum on the War on Drugs itself.

The race should be close. The first poll conducted last September had O’Rourke, a web developer by trade whose father was a county judge, just 7 points back. A University of Texas–El Paso (UTEP) exit poll of early voting precincts had the race deadlocked (exit polls are highly imprecise, however).

In interviews and on the stump, O’Rourke emphasizes that he’s not running as a pro-pot crusader; drug policy is one of a number of issues on which he feels the incumbent has been an empty chair. As a congressman, O’Rourke says he’ll refrain from pushing through policies his constituents don’t want. But it was the Drug War stance that made him a minor star, landing him speaking invitations at places like the Cato Institute and, in 2011, a book deal. Last November, two months after he kicked off his race against Reyes, O’Rourke and an ally on the city council, Susie Byrd, published a book, Dealing Death and Drugs, highlighting flaws in American drug policy and offering an array of prescriptions, including marijuana legalization.

“On the major issues that we understand better than anybody else—immigration, trade, drug policy, bilateral relations with Mexico,” Reyes is “a zero,” O’Rourke said in an interview with Mother Jones in March. “He’s just not part of the conversation, much less leading it or bending it towards our region’s interests.” (The Reyes campaign did not respond to a request for comment.)

O’Rourke is getting help from the Campaign for Primary Accountability, the anti-incumbent super-PAC funded in part by TD Ameritrade founder Joe Ricketts. The group has spent $195,000 on television, radio, and direct mail attacking Reyes for voting to raise his own pay (a common CFPA trope) and granting a federal contract to a firm that hired three of his kids.

But Reyes hasn’t exactly thrown in the towel. In April, he picked up endorsements from President Barack Obama and former President Bill Clinton. His campaign has highlighted O’Rourke’s “checkered past”—a reference to a 1997 drunk-driving charge—and sought to portray O’Rourke’s Drug War advocacy as hopelessly naive, if not flat-out dangerous. One 30-second Reyes TV ad, which aired during the Oscars, featured a series of precocious young children taking turns face-palming and shouting “No” as “Beto O’Rourke wants to legalize drugs” flashed across the screen:

Reyes and O’Rourke have a history together. O’Rourke, who who was raised in El Paso and speaks Spanish fluently (Beto is a nickname for Robert), won a city council seat in a largely Hispanic district in 2005. But it was four years before he started thinking seriously about the Drug War. Before then, the problems across the border were “of no interest or impact to me,” O’Rourke explained. “It just seemed like an academic exercise.” An uptick in cartel violence, much of it in nearby Ciudad Juarez, changed that.

“Sixteen-hundred-plus people had been murdered in Juarez in the most horrific, brutal fashion imaginable,” O’Rourke said. “It caused me and many others in the region to think about what the causes of that were.” In Mexico, the problem was weak and often corrupt public institutions. “And then on the US side,” O’Rourke said, “I thought the two key inputs…were drug demand and drug prohibition.”

In January 2009, O’Rourke introduced a resolution in the city council calling for the federal government to revisit its prohibition on marijuana. The resolution was not, he takes pains to note today, specifically advocating repeal—but he wanted Washington to think about it. The eight councilmen, often at odds, passed the resolution unanimously, but after the mayor (a fellow Democrat) vetoed the measure, their coalition fractured. O’Rourke needed six votes for an override; he got four. He blames Reyes.

O’Rourke says Reyes threatened to cut off federal funding for one of the poorest zip codes in the country.

The incumbent congressman “ended up pressuring or threatening or extorting the members of the city council…to change their votes to block that resolution that we had passed unanimously,” O’Rourke claims. In O’Rourke’s telling, Reyes had specifically threatened to turn off the federal spigots for his city council district, an area of El Paso that included El Segundo Barrio, one of the poorest zip codes in the country. O’Rourke says other councilmen got the same call.

Reyes, a former Border Patrol sector chief, viewed the violence across the river as a natural process that would, if given time, sort itself out. He compared the bloodshed to the Bruce Willis flick Last Man Standing, suggesting that the United States would be best served by letting the cartels have at it.

In early 2010, O’Rourke and his allies settled for a public letter, signed by luminaries from El Paso and nearby Las Cruces, New Mexico, declaring the “War on Drugs has been a dismal social, economic and policy failure.” A few months later, O’Rourke launched his campaign against Reyes.

Gregory Rocha, a UTEP political scientist, credits O’Rourke for personally knocking on doors (10,000 of them by early March) and doing his homework, and he thinks the young challenger caught Reyes flat-footed. “There’s been no response from the Reyes campaign—and I watch this stuff pretty carefully,” he says. “You’ve seen those ads, and you think, ‘What’s going on here? Why isn’t he replying or responding quickly?’ He’s getting defined, for all intents and purposes, by the O’Rourke people.”

Case in point: Reyes’ campaign website set up a page devoted to the “Truth About Beto,” but as of Tuesday, one week before the election and eight months after the Times poll showed the race deadlocked, it still says “coming soon.”

This time around, the last man standing might just be O’Rourke.