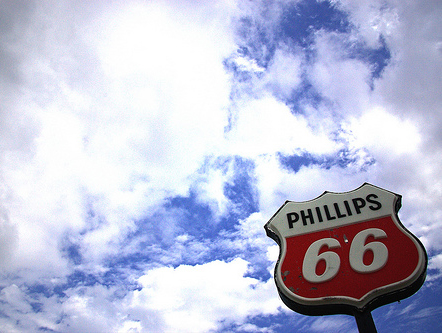 Many large corporations are saying one thing and doing another on climate change, the Union of Concerned Scientists found in a study released Wednesday.

The group examined the role that 28 publicly-traded companies played in two significant efforts to address climate change: the EPA’s finding that greenhouse gases endanger public health, and the 2010 ballot initiative in California to suspend the state’s own climate law. (Here are links to the executive summary and the full report).

UCS found that many oil and electric companies were actively engaged in efforts to obstruct climate policy. Chesapeake Energy, Tesoro, Murphy Oil, Occidental Petroleum, Valero Energy, and Peabody Energy were consistently opposed to dealing with climate change: both their PR and their actions worked against new, science-based laws to cut greenhouse gases.

Other companies were less straightforward about their positions. ExxonMobil put out corporate PR that was positive about climate policy while engaging in actions that undermined efforts to deal with climate change. For example, its contributions to anti-climate-action lawmakers outweighed contributions to pro-climate-action lawmakers by a ratio of 10 to 1.

ConocoPhillips, another oil giant, touted on its website that it “recognizes that human activity … is contributing to increased concentrations of greenhouse gases in the atmosphere that can lead to adverse changes in global climate.” The company has given money to the Nature Conservancy, and it was a member of groups like the Carbon Disclosure Project, U.S. Climate Action Partnership (USCAP) and the World Business Council for Sustainable Development. Sounds like a friend of the environment, right?

But while it was touting its supposedly green positions and alliances, ConocoPhillips also submitted comments to the EPA suggesting that there is a “high degree of uncertainty” about the negative effects of climate change on public health and well-being. It pulled out of USCAP right before climate legislation was supposed to go before the Senate, and established a campaign to get its employees to actively lobby senators against the bill. ConocoPhillips spent 15 times as much money electing anti-climate-action lawmakers as it did on pro-climate-action lawmakers. And it was a dues-paying member of groups like the American Petroleum Institute, the National Association of Manufacturers, and the US Chamber of Commerce that spent huge sums opposing climate action.

The report isn’t all bad news. Nike, for example, got high marks for consistency in its statements and actions, like resigning from the Chamber of Commerce in protest of its anti-climate work. The company also signed onto a letter to President Obama supporting climate legislation, and spent three times as much money on pro-climate-action politicians. Nuclear giant NRG Energy was also consistent in its messages and actions in support of climate action.

As UCS notes, their findings are limited by the lack of transparency in the business world—in other words, much of what these corporations do behind the scenes is not clear. So the report covers just a small portion of what these companies have been up to on climate.