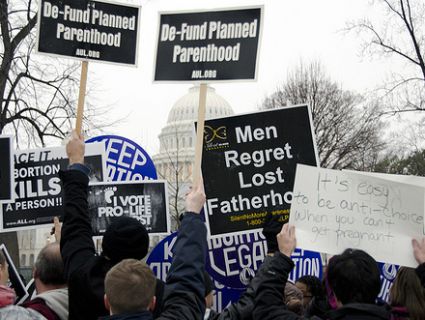 The District of Columbia is the latest front in the abortion battles, as a House subcommittee on Thursday heard testimony on a bill that would cut off women’s abortion access at 20 weeks gestation.

Reps. Trent Franks (R-Ariz.) introduced H.R. 3803 in January “to protect pain-capable unborn children in the District of Columbia.” The bill is modeled on legislation from the National Right to Life Committee, and mirrors efforts passed in a six states around the country in the past two years. Nebraska was the first to pass this type of legislation, in 2010, based on the much-contested premise that a fetus can feel pain 20 weeks after conception. Now National Right to Life legislative director Douglas Johnson says passing the DC measure is the group’s “top congressional priority for 2012.”

Because DC is treated as a ward of the federal government (at least it is whenever it’s politically convenient to do so), abortion here has become a major pawn in congressional fights. In the 2011 budget fight, a ban on using district funds to pay for abortions was used as a bargaining chip to secure an agreement. Now House Republicans are using it as a testing ground for a 20-week ban. The measure offers an exemption if the life of the woman is at the risk, but not in the cases of rape, incest, health risk to the mother, or fetal abnormalities.

Thursday’s hearing of the House Judiciary Subcommittee on the Constitution was full of dramatic testimony, with Rep. Franks opening the hearing by describing abortions after 20 weeks as “the greatest human rights atrocity in the United States today.”

It continued with testimony Dr. Anthony Levatino, a self-described “former abortionist” who gave vivid testimony about performing later-term abortions. Holding up a pair of forceps, he described a dilation and extraction (D&E): “You feel your self grabbing hard,” he said. “Out pops a limb … Then you tear out the intestine, heart, lungs. You know you got it right if… a white material runs down the side of the cervix. That’s the baby’s brain. Many times a little face will come out and stare at you. Congratulations, you just performed an abortion. If you think that isn’t agony for a child, please think again.”

In questions following his testimony, Rep. Steve King (R-Iowa) asked Levatino if it would be possible to get a YouTube video of the process he described, bemoaning the fact that videos of this type of medical procedure weren’t more readily accessible. “Do you suspect that there’s a concerted effort to make sure that information is not available?” he asked.

Levatino’s testimony was light on the science on fetal pain and heavy on the emotion (he later described his own conversion to becoming anti-abortion as resulting from the loss of his 5-year-old daughter in 1986). The GOP’s other two panelists offered similarly evocative testimony, the first speaking about her work in a neonatal unit with extremely premature newborns (which she equated with the fetuses) and the second describing his desire to popularize “prenatal hospice” care for families who find themselves facing severe fetal anomalies as an alternative to later-term abortions.

Just one witness testified against the measure: Washington resident Christy Zink, a mother of two who described her own experience with a later-term abortion in 2009, after she and her husband learned that their second child had a severe brain abnormality when she was 21 weeks pregnant. If delivered, the baby would face death or near-constant seizures, the doctor told them. Describing it as “the most difficult decision of our lives,” they decided to terminate the pregnancy at a point that this bill, if enacted, would make illegal. “I would have had to carry to term a pregnancy that doctors said would have no chance at life and if he did, he would have been in near-constant pain,” said Zink. “The decision to have an abortion at nearly 22 weeks was made out of love, and to spare my son pain and suffering.”

Currently, most states allow abortions through 24 weeks of pregnancy. But rolling back the number of weeks women can have an abortion has emerged as one of the more popular types of legislation anti-abortion activists are pushing in states around the country. Abortions after 20 weeks are rare, with the Centers for Disease Control and Prevention reporting that just 1.4 percent of abortions occur at 21 weeks or more. Women who seek later-term abortions generally do so because of a medical risk, a fetal abnormality that has only become apparent later in the pregnancy, or because they’re young, poor, or have other barriers to obtaining the abortion earlier.

The committee denied a request from DC’s Democratic Rep. Eleanor Holmes Norton, a vocal opponent of the bill, to testify at Thursday’s hearing, arguing that the Democratic side was only allowed one witness. Norton was in the room for Thursday’s hearing even if she couldn’t participate, and was critical of the effort to use the District to advance anti-abortion policy. “DC [is] a vehicle. They want a federal imprimatur,” Norton told Mother Jones following the hearing. “They will market it as though Congress has passed a 20-week abortion bill.”

“The Republicans want to call a truce in the war on women,” she continued. “Bring this bill to the floor and you’ll start it up big-time.”