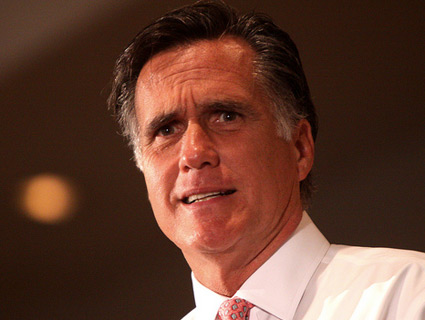 There was not much media analysis of the substance of the speech—especially Romney’s chief argument that he and Obama “have very different visions” of the United States. The core of Romney’s case for himself was this:

Government is at the center of [Obama’s] vision. It dispenses the benefits, borrows what it cannot take, and consumes a greater and greater share of the economy. With Obamacare fully installed, government will come to control half the economy, and we will have effectively ceased to be a free enterprise society.

With government controlling 50 percent of the entire economy, Romney said, “our lives will be ruled by bureaucrats and boards, commissions, and czars.” But is it true that once Obamacare fully kicks in, government will have complete dominion over half the economy? Or might this be one of the biggest fibs of Romney’s campaign?

I asked Romney HQ for an explanation, and it graciously replied with this:

I ran this justification by several economists who are consulted on such matters by media fact-checkers, and—to various degrees—they took exception. There is, it seems, much wrong with Romney’s statement and the analysis upon which it rests.

Eugene Steuerle, an economist with the Urban Institute (who says he doesn’t fancy being drawn into dust-ups regarding statements from presidential candidates), notes that the Romney camp is adopting an unfair baseline. It’s starting point is 2010, when, due to the recession, the US government was spending more (food stamps, unemployment benefits, other forms of assistance, and the stimulus) and the economy was lackluster. Consequently, government expenditures as a percentage of gross domestic product were higher than normal. Steuerle points out that it is wrong to assume this level will remain, and he notes that when “recessionary spending” ends, the overall government expenditures-to-GDP ratio is likely to drop.

This sort of statistics fudging is routine spin for a political campaign. Gary Burtless, an economist at the Brookings Institution, explains that there are more fundamental problems with Romney’s analysis. Romney claims that all private health care expenditures—such as those that occur when a Medicare beneficiary pays for a service not covered by the program or when a person with insurance at work obtains medical services—should be counted in the government-controlled category. This is “ludicrous,” Burtless says.

“This analysis is so stupid it is hard to know where to begin,” Bruce Bartlett said of Romney’s assertion that Obamacare will lead to government control of half the economy.

To recap: Romney rigs the baseline by predicating his analysis on that 38 percent government-expenditures/GDP figure. Then he adds 10 percent for private health care expenditures in a manner that Burtless calls “ridiculous.”

There’s more. Burtless contends that it is problematic to term making a transfer payment—for example, sending someone a Social Security check—an act of government control. “The government only has control in the sense that it is raising the money—or borrowing it—and sending it out to the recipients,” he explains. “But it doesn’t control how these people spend the money.” His mother, he notes, receives Social Security, “and she can spend it any way she wants. She can give it to the Romney campaign.” With Medicare, she can select her own doctor; the government doesn’t control her choice.

“The government does control the Defense Department,” Burtless notes. “It pays soldiers and general, pays for the supplies, tells the soldiers where they will be stationed. But when it gives me a transfer payment, does it really control the economy?” Given that there are federal laws regarding property, patents, interstate commerce, trading aboard (such as the prohibition on trading in Cuba), and other economic activity, he adds, “you could say government controls 100 percent of the economy.”

Bruce Bartlett, who served as a senior economist in the Ronald Reagan and George H.W. Bush administrations, was more blunt in his appraisal of Romney’s assertion that Obamacare will lead to government control of half of the economy: “This analysis is so stupid it is hard to know where to begin.” He notes:

Health spending has been rising for years for reasons unconnected to Obamacare. Why assume that all of any projected increase between now and 2020 results solely from that? Tossing in all private health spending as essentially part of government spending is fundamentally dishonest. Its only purpose appears to be to find some desperate way of lifting total spending above the 50 percent threshold. If you are going to do that, why not include every other sector of the economy subject to government control?

If Romney equates government involvement in an economic sector with control, Bartlett notes, then there’s no limit to the nightmare Romney is promoting. “Agriculture is heavily controlled, so why don’t we add all food consumption to government’s share of GDP?” Bartlett asks. “Banking is also heavily controlled, so let’s add that too. Ditto housing, manufacturing, etc. This doesn’t pass the laugh test.”

Yet no one is howling foul about Romney relying on this scary-sounding factoid to promote his claim that Obama is on the verge of destroying free enterprise in the United States. (PolitiFact has previously called out Romney for saying the United States is “inches away from no longer being a free economy.”)

On the campaign trail, Romney touts his corporate credentials and argues he knows what’s best for the ailing US economy. That’s certainly fair play. But he has continuously accused Obama of not understanding the nation or its economy (while apologizing for the country overseas) and of desiring to turn the United States into an European-style state where poverty will spread. To level such an indictment credibly, it helps to toss out facts—or what seem to be facts. By charging Obama with a power grab that will place government in control of half of the economy, Romney positions himself as a savior for those voters who believe (maybe because of Romney’s own demagoguery) that Obama is running amok and threatening the fundamental nature of the nation.

This claim was a supersize stretch of the truth. Yet nothing prevented Romney from making good use of it, for in this political culture there is often little, if any, penalty to be paid for hurling such reality-defying rhetoric. One can only wonder how big the whoppers will get by November.