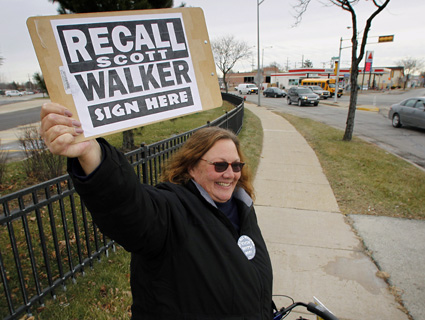 Republican Kathy Nickolaus may be the only county clerk known by name across Wisconsin—and not for a good reason.

Last year, Nickolaus, the top election official in Waukesha County, a solidly Republican suburb outside of Milwaukee, blamed “human error” for the late discovery of more than 14,000 missing votes in a bruising state Supreme Court race. Those votes erased liberal favorite JoAnne Kloppenburg’s lead in the race, handed victory to conservative incumbent David Prosser, and later led to an expensive recount. This April, Nickolaus resorted to posting election results on strips of grocery-receipt-like paper after the county’s reporting system failed on election night.

After the April controversy, Nickolaus pledged to step down from handling the county’s election operations. But ahead of Gov. Scott Walker’s recall election on June 5, the most expensive election in state history, recent evidence suggests Nickolaus still has control over the county’s vote-counting. Observers and news reports from the recall’s May 8 primary say Nickolaus looked like her usual self on election night. The WTMJ news station reported that Nickolaus “appeared to be very much in charge of the count.” Says another observer, who asked to remain anonymous to speak openly: “On election night, Kathy Nickolaus was there, and she made it seem as if she was in control.”

Republican county executive Dan Vrakas, who said “the public… lost faith in our election process in Waukesha County” because of Nickolaus’ failures, has denied that Nickolaus remains in charge of election operations. But after Nickolaus’ involvement in the May 8 primary, Vrakas took to the press to say he was “very disappointed” that she showed up. “I’d prefer that she wasn’t here on election night but I can’t ban her from the building anymore than I can ban anyone else from the building,” Vrakas told the Waukesha Freeman. Vrakas said that a deputy of Nickolaus’s had taken control of the vote-counting process.

Waukesha County bleeds Republican. Every Republican presidential candidate since the 1980 election has won the county by 20 or more percentage points. Republican gubernatotrial candidates have won the county in every race since 1982. Waukesha has treated Scott Walker especially well: he claimed 71 percent of the vote there in the 2010 gubernatorial election. In the May 8 recall primary, the county delivered him (PDF) more votes—79,098—than any other county in the state.

Kelly Steele, a spokesman for the labor-backed We Are Wisconsin group, says it would be “criminal” to allow Nickolaus to have any role in the county’s June 5 election. “After Kathy Nickolaus earned her reputation as the most incompetent or corrupt election clerk in America, Waukesha County assured the world she would no longer administer elections,” Steele says. “All evidence from the May primary suggests she’s fully in charge and reporting out results to the world.”

The Milwaukee Journal Sentinel editorial board has also demanded Nickolaus’ resignation. “How can the citizens of Waukesha have any confidence that something else won’t go wrong in the next election; something that will call into question the results?” the board asked in April. “They can’t as long as Nickolaus remains in office.” But although Nickolaus has said she won’t run for reelection, she remains in her job—and, if the May 8 primary is any indication, she’s still supervising elections.

Nickolaus, Waukesha County Executive Dan Vrakas, and Waukesha GOP director Cathy Waller did not respond to multiple requests for comment for this story.