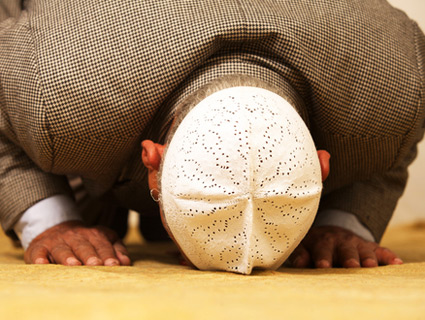 Larry Smith, a former Drug Enforcement Administration agent running for sheriff in Smith County, Texas, has a unique plank in his platform: He has pledged to protect this deep-red border county from the creeping menace of Islamic religious law, or Shariah.

Outside of science fiction, this Texas county—which voted for John McCain at a 70 percent clip—doesn’t seem the most likely place for an Islamist takeover. After all, creeping Shariah is mostly a myth. The issue might come up in civil cases if both parties to a contract have accepted an agreement based on religious law, but the Constitution bars religious law from superseding civil law.

Despite his out-there Shariah stance, Smith has earned the endorsement of the county’s local paper. And local Democrats aren’t even fielding a candidate in the sheriff’s race. That means next Tuesday’s Republican primary—which includes four candidates for the county’s top law enforcement post—will likely decide whether Smith County’s next sheriff devotes time to worrying about a Shariah takeover.

Two of Smith’s rivals say Shariah shouldn’t be an issue in the race.

“We hear [about Shariah] on the national media, but here specifically in Smith County, Tyler, in the state of Texas, I’m not seeing that this is going to be a big problem,” says Chris Green, a former game warden running in the primary. “I don’t think it’s gonna occur, especially here; it may in some of the more liberal states.”

Another candidate, Bobby Gorman, Smith County’s chief sheriff’s deputy, suggested Smith was just trying to provoke a controversy over nothing. “Running for sheriff, you always want to get somebody’s attention,” Gorman says.

Anwar Khalifa, a local homebuilder, Muslim leader, and lifelong Republican who speaks with a slight drawl, says he was “shocked” when he heard about Smith’s campaign vow. Before that moment, Khalifa says, he was “actually supporting Larry.” An Egyptian immigrant who moved to Texas when he was eight, Khalifa says that Smith County is a welcoming and tolerant place, but the last few years there has been an influx of anti-Muslim speakers at local churches offering dark warnings about an Islamic takeover.

“They cloak it and say we’re only talking about radical Muslims, but they don’t differentiate,” Khalifa says. “This is anti-Islam.”

Smith’s anti-Shariah pledge seems to have helped him gain at least one endorsement, from a local tea party group called Grassroots America, We the People. The group sponsored an event at a local church hosting Brigitte Gabriel, the head of ACT! for America, an organization that sees itself as defending America from “radical Islam” and according to its website, has a chapter in Smith County. Gabriel has written that Islamic terrorists are “really just very devout followers of Muhammad.” According to Khalifa, Smith provided “security” for Gabriel’s event. (Smith did not respond to several requests for comment.)

“Anti-Muslim grassroots organizations are the vehicles by which these talking points enter the state and local dialogue. That’s why we’ve been seeing it sprout up so suddenly at the local level,” says Wajahat Ali, the lead author of Fear, Inc., a Center for American Progress report on anti-Muslim organizations. “The impetus behind it, though, is a movement that wants to exclude American Muslims from the same rights and freedoms that other Americans enjoy.”

Khalifa says that he recently spoke to Smith, who he says apologized for his anti-Shariah pledge. “[Smith] was very cordial and apologetic,” Khalifa says. But the candidate’s website still sports language promising Smith will use his own money to train officers so they understand “why Sharia and international law will never be acceptable substitutes” for the Constitution.

This wasn’t the first time Khalifa tried to convince a fellow Republican to soften his stance on the Shariah issue. State Rep. Leo Berman, a Republican who represents the area, introduced legislation in 2011 to ban the consideration of foreign law in Texas courts, explaining that he had heard Shariah law was being enforced in Dearborn, Michigan. (It isn’t.) When Berman was preparing his legislation, Khalifa helped convince Berman to focus on “international law” rather than only Shariah.

Berman’s legislation didn’t survive the 2012 session of the Texas Legislature, but he says he’ll introduce it again next year if reelected. Asked how he felt about Berman’s legislation, Khalifa said he was happy Shariah wasn’t being identified by name.

“It’s better than singling out my group of folks,” Khalifa says. “If people really want to hate, they’re going to hate, and there’s not a whole lot you can do about it. You just set an example.”