If you want to learn about topics like climate change, sex slavery, global poverty, or solving the world’s problems with video games, there’s a TED talk for you. But income inequality in the United States? Keep looking. National Journal‘s Jim Tankersley reported today that the wonkfest’s organizers decided not to post the video of a TED presentation by a venture capitalist named Nick Hanauer, who’d spoken about how the American middle class has been left behind:

“We’ve had it backward for the last 30 years,” [Hanauer] said. “Rich businesspeople like me don’t create jobs. Rather they are a consequence of an ecosystemic feedback loop animated by middle-class consumers, and when they thrive, businesses grow and hire, and owners profit. That’s why taxing the rich to pay for investments that benefit all is a great deal for both the middle class and the rich.”

You can’t find that speech online. TED officials told Hanauer initially they were eager to distribute it. “I want to put this talk out into the world!” one of them wrote him in an e-mail in late April. But early this month they changed course, telling Hanauer that his remarks were too “political” and too controversial for posting.

TED curator Chris Anderson* emailed Hanauer that while “I personally share your disgust at the growth in inequality in the US,” he felt that posting the talk would lead to “a tedious partisan rehash of all the arguments we hear every day in the mainstream media.”

Tankersley has posted the text and slides from Hanauer’s talk. A couple of his charts will be familiar to MoJo readers—we originally published them as part of our packages on income inequality and the workplace speed-up. 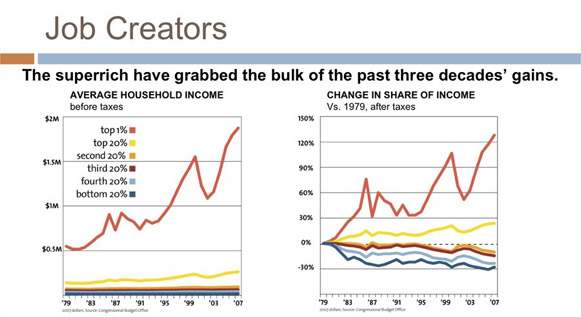 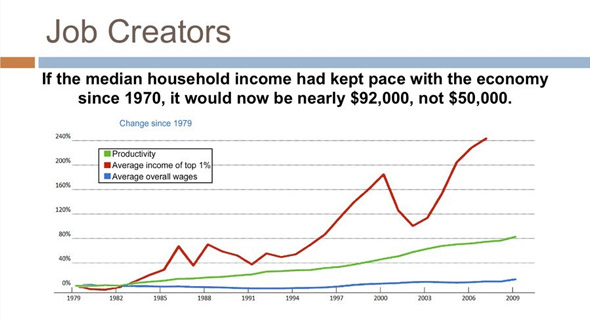 Want to borrow our charts for your own alternative TED talk? Go for it—we’ve posted downloadable versions of the most popular ones here. Let the tedious partisan rehash begin!

Updates, 5/17/12: On his blog, TED’s Chris Anderson has responded to what he calls the “non-story” about Hanauer’s talk. He says it was not posted on the TED home page because it didn’t meet its standards: “It framed the issue in a way that was explicitly partisan. And it included a number of arguments that were unconvincing, even to those of us who supported his overall stance. The audience at TED who heard it live (and who are often accused of being overly enthusiastic about left-leaning ideas) gave it, on average, mediocre ratings.”

Here’s the actual talk, which Hanauer put on YouTube. You’ll see that some audience members gave him a standing ovation.

Correction: An earlier version of this article incorrectly stated that Chris Anderson is also Wired‘s editor-in-chief. The sentence has been corrected.