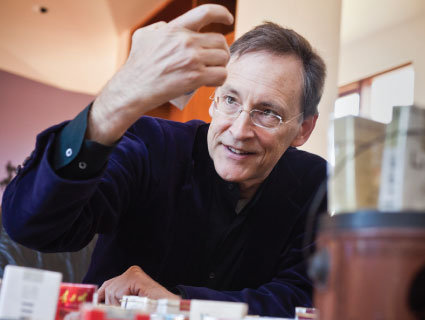 Proctor shows off his collection of tobacco paraphernalia.Lianne Milton

Amid the impressive collection of cactuses outside his modern two-story abode on the Stanford University campus, science historian Robert Proctor points to a few sad-looking tobacco plants that he’s growing just for the hell of it. “They’re not thriving here,” he tells me offhandedly.

They obviously know their enemy. “I like to write about the history of the unseen and the untold,” he explains. “Of controversy, but also of evil. Of abuse of science. Of science used for horrific purposes.” Proctor’s wide-ranging scholarly interests include Charles Darwin, the politics of gemstones, and Nazi doctors. But his magnum opus is Golden Holocaust, a devastating new compendium of the tobacco industry’s sins that lays out in head-shaking detail how a handful of companies painstakingly designed, produced, and mass-marketed the most lethal product on the planet.

Knowing that Proctor’s book was coming, RJ Reynolds subpoenaed his unfinished manuscript in 2009. Though his lawyers beat back the attempt, it cost him $50,000, not to mention days of depositions.

“They didn’t want this book to come out,” says Louis Kyriakoudes, an associate professor at the University of Southern Mississippi and one of just three historians, including Proctor, who have testified against the tobacco industry in court. (More than 70 of their historian colleagues have quietly collected millions testifying and consulting on the industry’s behalf.) “I suspect that if they were successful subpoenaing the work in progress, they could try to discredit it and diminish its impact,” says Kyriakoudes.

“You can put things in cigarettes you can’t put in dog food,” Proctor says.

By his own estimate, Proctor spent a decade poring over more than 100,000 tobacco industry documents unearthing details such as a primer on how to reach “young starters” and a 1970 Lorillard memo suggesting that “Negroes” smoke menthols to “mask” their “real/mythical odor.” The 57-year-old prof is a walking encyclopedia of tobacco arcana, apt to mention things like “beaver,” a rodent anal secretion sometimes added to cigarettes, perhaps to enhance “pack aroma.” Or that as much as 90 percent of America’s licorice supply is used as a cigarette sweetener. (Honey, chocolate, and sugar are also employed to make cigarette smoke more inhalable—and thus more addictive.) Or that around 4 percent of a cigarette’s weight is made up of humectants like propylene glycol—basically antifreeze.* “You can put things in cigarettes you can’t put in dog food,” Proctor says.

Even though tobacco companies have assumed a lower profile since the massive lawsuits of the ’90s, Proctor’s work shows that their influence has not waned. Since 2008 they have spent more than $87 million on lobbying and have doled out more than $7 million to members of Congress. The results are obvious: In 2009, the industry convinced Congress to prohibit the Food and Drug Administration from ordering the removal of nicotine or banning cigarettes entirely. When lawmakers outlawed kid-friendly tobacco flavorings such as grape, vanilla, and strawberry in the same year, they didn’t touch menthol, which cigarette makers have long used for its cooling, anesthetic effects. Congress passed a law in 1993 requiring all Navy ships to sell tobacco, directly contradicting the goal of a “smoke-free Navy” by 2000. Smoking was eventually banned in submarines only—in 2010.

It’s easy to see why plaintiff lawyers have hired Proctor as an expert witness in dozens of cases—and why tobacco lawyers keep close tabs on him, even attending his talks incognito. He recounts confronting one mole who showed up at a conference cluelessly wearing “leather pants and shirt, all slit, the way an undergraduate might look if you were trying to copy what an undergraduate looks like.” The same law firm that went after Proctor’s book persuaded a Florida judge to let it troll his private emails in hopes of unearthing messages that would disqualify him as an expert witness. In the end, the judge didn’t buy it; Proctor had simply asked another historian whether the grad students hired by her industry-funded colleague knew who they were working for.

One of the most pervasive myths about smoking is that it’s history: “It’s still two jumbo jets crashing every day,” Proctor says.

One of the most pervasive myths about smoking, Proctor says, is that it’s history. “Americans still smoke 350 billion cigarettes a year. It’s still the leading cause of death. It still kills over 400,000 Americans per year. It’s still two jumbo jets crashing every day.” The six trillion cigarettes smoked annually around the world “are enough to go from the earth to the sun and back with enough left over for several round trips to Mars.” For every $10,000 in profits the industry earns, he calculates, another smoker dies.

Proctor recalls his recent courtroom examination by lawyers from Lorillard, whose brands include Newport, the nation’s top-selling menthol, and Kent, whose Micronite filters were once made with asbestos. “They said, ‘You want Lorillard to go out of business, don’t you?’ I said, ‘No, I just want them to make a product that doesn’t kill millions of people.'”