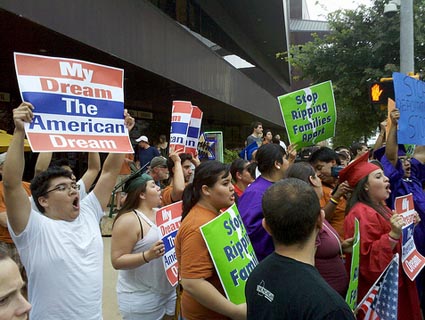 Last week, President Barack Obama announced a Department of Homeland Security directive allowing undocumented immigrants eligible for the DREAM Act to avoid deportation and acquire work authorization. People who were brought to the country under the age of 16, have been here longer than five years, and are under the age of 30 are eligible, but only if they don’t have a criminal record and they have graduated high school, obtained a GED, or served in the armed forces.

Republicans have voiced a number of objections to the new policy, but many of them are complete nonsense. Here are just a few of the false narratives we’ve seen repeated over the past few days:

This is amnesty! The Daily Beast‘s David Frum writes that the move is a “conditional amnesty, yes, but amnesty.” Except it’s not amnesty, unless we’re changing the definition of amnesty. Let’s go by the Webster’s definition, which is an “act of an authority (as a government) by which pardon is granted to a large group of individuals.” The DHS directive does not “pardon” anyone. It is a statement of policy that says DHS will not deport certain unauthorized immigrants and that they will be given permission to work. This can be reversed by the next president. It does not grant even temporary legal status in the country, let alone citizenship or permanent residency, the only two outcomes that could be credibly described as “amnesty.” A more appropriate metaphor to describe the order would be a “stay of execution,” since in a year these people could find themselves in deportation proceedings.

This is the DREAM Act by fiat! It isn’t, because Obama’s DHS order does not offer a path to citizenship, which is what the DREAM Act would have granted. All it does is defer deportation and offer work authorization for a limited number of unauthorized immigrants.

It’s a power grab! Some of these objections are more sincere than others. But deciding which cases to pursue and which to ignore has long been a prerogative of the executive branch. There are 11 million undocumented immigrants in the US. The federal government claims it only has the resources to deport about 400,000 a year. Deciding not to devote those limited resources to kicking out a group of unauthorized immigrants who didn’t make the decision to end up here and could eventually gain legal status is a defensible use of executive authority.

Republicans would have compromised, if only Obama had let them! Sadly, no. Senator Lindsey Graham (R-S.C.) claimed to support comprehensive immigration reform in 2010, but Graham proclaimed the effort “dead” after Democrats had the gall to pass the Affordable Care Act. If you’re not buying that excuse for killing the bill, Graham was also really upset that Democrats decided to prioritize immigration reform over cap and trade—another Democratic priority he claimed to support and then walked away from. It’s almost as if the only Republican in the Senate even talking like he wanted to get something done on immigration wasn’t really serious about it. By the time the DREAM Act, originally a Republican proposal, came up during the lame duck session in 2010, only a sprinkling of Senate Republicans were willing to cross the aisle to vote for the bill—and not enough to make up for skittish centrist Democrats who voted no. Senator Orrin Hatch (R-Utah), one of the original sponsors, skipped the vote, and other former co-sponsors like John McCain (R-Ariz), Chuck Grassley (R-Iowa), Susan Collins (R-Maine) and Mike Crapo (R-Idaho) voted no.

Republicans would compromise, if only Obama secured the border! The Obama administration has overseen more than a million deportations, devoted more personnel and resources to border security, and net migration from Mexico is zero and possibly even negative. Whether that’s due to the economy or security measures or some combination of both, Obama’s political strategy of prioritizing deportations and border security in order to induce Republicans to compromise on immigration reform has only resulted in Republicans offering louder, harsher denounciations of the president’s supposedly lax enforcement of immigration laws.

Obama had his chance to reform immigration and didn’t make it a priority! This is a matter of opinion, and it’s one shared by many immigration reform activists. But coming from Republicans, it’s not the kind of criticism that can be taken seriously. Republicans did their best to block immigration reform efforts, and having done so, they are now attacking the president for being unable to overcome their successful obstruction.

Obama messed things up for Rubio! Well, sure. But Senator Marco Rubio (R-Fla.) started floating a proposal to offer temporary legal status to potential DREAM Act beneficiaries back in April. As of mid-June, he hadn’t even put forth a bill. House Speaker John Boehner (R-Ohio) had publicly said getting Rubio’s proposal through the GOP-run House of Representatives would be “difficult at best.” Following the announcement of the DHS directive, Rubio said he might not even bother trying anymore. For all the complaints about Obama playing politics on immigration, it’s hard not to view Rubio’s entire proposal as an attempt to make Republicans look more moderate on immigration than they actually are without committing to any concrete policy changes. If Republicans had been serious about granting lasting relief to potential DREAM Act beneficiaries, Obama’s move would have made them prioritize such efforts rather than abandon them. There’s always Rep. David Rivera’s (R-Fla.) bill. But unlike Rubio, Rivera’s not assumed to be in the running to join Romney on the GOP ticket. So no one cares.