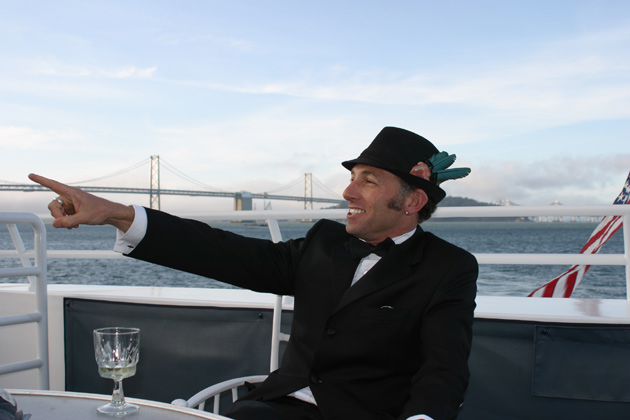 We’re sitting in the sleek lounge of San Francisco’s Infinity Towers around a granite coffee table inexplicably stacked with unopened cans of wild sardines: one reporter and a handful of adherents to obscure political philosophies, flirting over cocktails.

“I can go either way on the caning,” says a guy I’ll call MH, a thirtysomething tech entrepreneur in an expensive suit who recently returned from a jaunt to Singapore, “but I have no fundamental problem with harsh punishment for people who deserve it.”

Kate Herrick, a teacher with an online school promoting the views of the late author and libertarian demigoddess Ayn Rand, smiles appreciatively and tosses her curly hair. “And I think they should go further with torture,” she offers. “When you read about these serial killers…”

We have come here for the opening mixer of the third-ever conference of the Seasteading Institute, a think tank funded by Silicon Valley tech gurus—Snow Crash fans, apparently—who envision floating city-states as incubators for alternative models of governance. “Seasteading is a common cause for many ideologies,” the institute’s website explains, in a statement that could be interpreted as either boast or caveat.

“There’s no nonperjorative term for what I am,” MH is telling the man across the table, whose T-shirt is emblazoned with the libertarian equation: Taxation = Slavery. Herrick had just pegged MH as “Hobbesian,” but he says he harbors more admiration for Robert Filmer, a 17th-century English political philosopher who defended the divine rights of kings.

Principality of Sealand (1967-present)
Location: World War II military platform six miles off the English coast
Raison d’être: Vanity project of Prince Roy Bates of Sealand. Sells royal titles and has been suggested as a data haven for the likes of WikiLeaks.

Oceania (1993-94)
Location: Man-made floating “hexagons” 50 miles off Panama
Raison d’être: Laissez-faire capitalist paradise. “In Oceania the sharks and barnacles will be in the sea, not on your property!” Never got off the drawing board.

Gay and Lesbian Kingdom of the Coral Sea Islands (2004-present)
Location: Tiny islands in the Great Barrier Reef
Raison d’être: Pro-gay-marriage protest against Australia. National anthem: Gloria Gaynor’s “I Am What I Am.” —Dave Gilson

Founded in 2008 with seed money from PayPal founder Peter Thiel, a prominent backer of the Ron Paul Revolution, the Seasteading Institute combines a hacker’s approach to government with a Waterworld-esque conception of Manifest Destiny. More than a mere repository for political dreamers, it brings together engineers, scientists, and entrepreneurs of the sort one often finds in the Bay Area: techtopians who might be brilliant or delusional—or both.

The first full day of the conference kicks off the next morning with a continental breakfast in the basement of Le Méridien, a luxury hotel in San Francisco’s financial district. Entering the room, I encounter the Seasteading Institute’s founder, Patri Friedman—a former Google software engineer and grandson of the free-market cheerleader Milton Friedman—showing old Obama and Reagan campaign posters to a group of admirers. “Our revolutions have become superficial,” he tells them, but seasteads “would create a Cambrian explosion in ways to live together.”

Of course, before anyone can emigrate to any of these floating utopias, somebody needs to figure out how to build them. The institute has created the Poseidon Award, which it hopes, by 2015, to bestow upon the founder of the world’s first seastead that hosts at least 50 full-time residents, is financially self-sufficient and politically autonomous, and is willing to offer its real estate on the open market.

During the morning sessions, naval architecture professor George Petrie, the institute’s director of engineering, offers a condensed history of seasteading concepts, among them a “floatel” design dubbed ClubStead—a seasteaders’ ClubMed. There was also Oceania, a putative libertarian paradise off the Panama coast. Proposed in the early-’90s by web-hosting entrepreneur Eric Klein, the idea was ultimately abandoned. “The Libertarian party is small in number and too few members have the financial resources to bankroll their beliefs,” Klein explained in a letter on Oceania.org. “The poor performance of Libertarian candidates throughout the nation is reflective of these sad facts.”

Petrie is of the opinion that investors could create a seastead in international waters off the West Coast—perhaps using a repurposed offshore oil-drilling platform—for roughly $300 per square foot, about what housing costs in San Francisco. He favors a modular approach, “basically an at-sea trailer park,” though an anonymous donor recently gave the institute an $8 million, 275-foot gambling boat anchored in Florida. 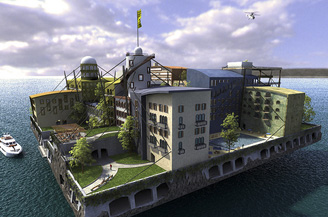 Atlantis shrugged: An artist’s conception of a future seastead. Seasteading.org

In the short term, seasteading fans have put their hopes in Blueseed, another Thiel-backed startup, which aims to anchor a floating residential barge off the coast of Northern California; it would house 1,000 immigrant tech workers who can’t qualify for US visas. “Question is,” Blueseed’s president, Dario Mutabdzija, tells a tableful of interested tech guys over lunch, “will the United States be okay with this in the end?”

At the table is Peter Burchhardt, a former program manager for Microsoft, who wants to know why Blueseed doesn’t market itself to tech companies in, say, Germany, as a way to offer workers a tax dodge. “We have been approached,” Mutabdzija admits, but Blueseed’s focus on start-ups is more politically palatable.

In the afternoon, after a Duke University student schools us on on nonlethal ways to repel pirates—LRAD sound cannons, high-pressure hoses, fortified “citadel rooms”—the lib-tech flotsam turns to the question of whether seasteads will be allowed to claim sovereignty. Myron Nordquist, associate director of the Center for Oceans Law and Policy at the University of Virginia, recounts a 1970s visit from the crown prince of Tonga during his past life as a State Department official.

The prince, who had arrived in DC sporting a top hat and a monocle, wanted to know if the United States would protect a group of American libertarians who, to the monarchy’s chagrin, had built their own micronation, the “Republic of Minerva,” on an artificial island close by. “We don’t protect anyone, especially if they are American,” Nordquist recalls telling him. Thus emboldened, Tonga commissioned a New Zealand tugboat and stormed Minerva with an invading army that included a few palace guards and a four-piece band. The libertarians pulled up stakes, and the abandoned island has since disintegrated back into the sea.

“Our revolutions have become superficial,” Patri Friedman tells a clutch of admirers. Seasteads “would create a Cambrian explosion in ways to live together.”

The day ends with a “lightning round” of presentations by entrepreneurs who envision using seasteads to farm fish, grow algae for biofuel, outsource government services, and breed genetically engineered superorganisms.

The next evening, I find myself aboard the good yacht Merlot for a seasteading sunset dinner cruise on the San Francisco Bay. Up on the top deck, taking in a three-piece ragtime band, is Marc Joffe, a credit consultant who recently traveled to Cuba to explore the possibility of recruiting doctors for a seastead dedicated to medical tourism. “One government representative has made some positive noises,” he says, peering at me through his auto-tint sunglasses. “But no follow-up.”

Needing a refill on champagne, I head for the bar, where 15-year-old Mason Garard has just ordered a glass of ginger ale. Known around Indianapolis’ North Central High School as “Mr. President” (or so he says), Garard is an enthusiastic student of alternative political systems, especially those involving ships, booty, and hardtack. “Pirates had complex systems of government that were revolutionary,” he explains as the Merlot passes beneath the erector-set skeleton of the Bay Bridge. Garard fancies himself a liberal, and he seems particularly enthralled with how some pirate bands operated as communes, dividing their spoils equally.

As the cruise continues, a tongue of fog unrolls from the mouth of the Bay, slathering the Merlot in Pacific damp. In the white-tablecloth dining room, I sit down to a plate of prime rib across from a scruffy man wearing a bandanna decorated with pirate skulls. He’s chatting with Ryan William Nohea Garcia—a Hawaiian who somehow reminds me of Keanu Reeves—about how Star Trek creator Gene Roddenberry supposedly named Captain Kirk after Captain Cook, the 18th century oceanic explorer. “Seasteading is about as close as you can get to living in the sociopolitical future,” Garcia says.

Chief engineer Petrie, clad in a tux with leopard-print bow tie, chimes in with a disquisition on the potential benefits of using seasteads to harvest energy from electricity-producing seaweed.

Entrepreneurs hope to use seasteads to farm fish, grow biofuel, and outsource government services, not to mention escape taxes and regulations.

Before long, the boat has escaped the fog for the sheltered North Bay, where a full moon casts its glow over Sausalito’s hillside mansions and the emerald slopes of Mount Tamalpais. Back on the deck, I join two of the handful of women on board in a discussion of whether the seasteaders are crazy. “All amazing inventions actually came from an unknown,” Camelia Holland, who runs a Silicon Valley credit union, says in their defense. “Everybody who came here, they came knowing that we don’t have the answers.”

Christopher Philip, a renewable energy entrepreneur clad in a blazer and Tevas, joins us just in time to point out that nearby Angel Island was once considered as a potential home for the United Nations—which, after all, was conceived in San Francisco before being stolen by New York.

The UN might suck less, Philip muses, if it resided on an idyllic island, the kind of place the Greeks had in mind when they coined the Latin word schole—the root of the word “school” that literally means a “beautiful place for thought and contemplation.” He pauses to contemplate the rolling slopes of chaparral and Monterey cedars across the water. “That could have been the schole right there.”

This article has been revised. A version ran in the September/October 2012 issue of Mother Jones under the headline “Atlantis Shrugged.”