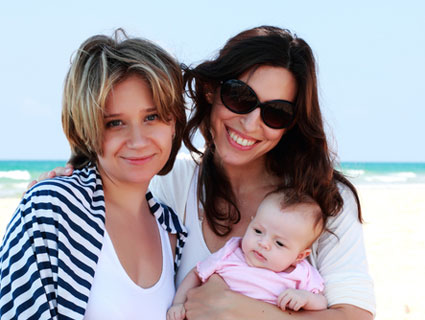 Opponents of same-sex marriage are positively giddy about a new study purporting to show that the children of opposite-sex couples are better off than those of same-sex couples. “Scientifically this is huge,” the National Organization for Marriage’s Maggie Gallagher wrote on the website of the conservative magazine National Review. With the Supreme Court poised to consider one or more cases on gay marriage, NOM and other gay-marriage foes are hoping that the new study serves as definitive proof that will convince the high court that the government has concrete, nonreligious reasons to prevent gay people from getting married.

They shouldn’t get their hopes up.

The new study, which was funded by conservative groups such as the Witherspoon Institute and the Bradley Foundation, has drawn national media attention because it was performed by Mark Regnerus, a sociology professor at the University of Texas-Austin whose qualifications outstrip previous “experts” touted by same-sex marriage opponents. Opponents of same-sex marriage have had great success exploiting conservative religious and cultural attitudes towards homosexuality in referendums and ballot measures. But in they’ve struggled in court, where they’ve lacked reputable social-science justifications for their views on same-sex marriage. When compelled to prove that withholding marriage rights from two consenting adults of the same gender is a legitimate government interest, they’ve been armed with little more than their own assumptions.

Anti-marriage equality activists hope the Regnerus study will change the game. According to Regnerus, who described his results at Slate, “the children of women who’ve had same-sex relationships” were “more apt to report being unemployed, less healthy, more depressed, more likely to have cheated on a spouse or partner, smoke more pot, had trouble with the law, report more male and female sex partners, more sexual victimization, and were more likely to reflect negatively on their childhood family life, among other things.” “The children of fathers who have had same-sex relationships,” Regnerus writes, “fare a bit better.”

But it’s still just one study, and the evidence on the other side of the ledger is strong. The American Psychological Association has long maintained, on the basis of decades of research, that gays and lesbians make just as good parents as heterosexuals, and it isn’t backing down from that.

Supporters of marriage equality, such as Jim Burroway, editor of Box Turtle Bulletin, have already outlined other serious objections to the new study. Participants who said that either of their parents had ever had a same-sex partner while they were growing up were counted as children of gay parents for the purposes of the study. Marriage equality activists argue that the study compares apples to bicycles—often, the study ends up comparing long-married heterosexual couples to parents whose gay relationships are no longer intact, or who only had brief same-sex relationships.

“It would be like comparing two-parent Catholic families and divorced Mormon parents and coming out with a conclusion that Catholics are better parents than Mormons,” says Thalia Zepatos, director of public engagement at the marriage equality group Freedom to Marry.

But even if the study’s conclusions are accurate, and children of same-sex couples do “worse” than children of heterosexual couples, that’s hardly a silver bullet for the anti-marriage equality crowd. The argument that gay people shouldn’t be allowed to get married if their kids don’t fare as well, on average, than straight people’s kids leads to absurd conclusions. “If a child born in poverty is less likely to thrive as an adult, no one would argue that poor people can’t get married,” says Doug Kendall, head of the Constitutional Accountability Center, a liberal legal advocacy group. “Even if it’s true [that gay people’s kids do worse], it should not be relevant to the constitutional question of invidious discrimination.”

Then there’s the fact that, although anti-marriage equality activists have consistently tried to tie marriage to procreation, plenty of couples get married without the intention or result of producing offspring.

As far as the impending court cases related to same-sex marriage, the study seems unlikely to tip the scales in favor of those opposed. If Justice Anthony Kennedy, the likely swing vote, decides he finds the study a credible reason to ban same-sex marriage, it will probably be because he was leaning towards opposing marriage equality anyway.