Update, 6/29/12: Yesterday, the Supreme Court upheld the bulk of Obamacare in an unexpected 5-4 decision, with Chief Justice John Roberts writing the majority opinion. That doesn’t change the court’s overall ideological direction; as explained here, the Roberts court does not rule conservatively all the time. And see below for updated broccoli-related data.

If the Supreme Court strikes down all or part of the Affordable Care Act, a.k.a. Obamacare, it will undoubtedly cement the Roberts court’s reputation as the most conservative in years. That’s not an entirely a matter of opinion. Thanks to an amazing trove of data collected by law professors Andrew Martin and Kevin Quinn and the Supreme Court Database, the court’s rightward trajectory can be confirmed. 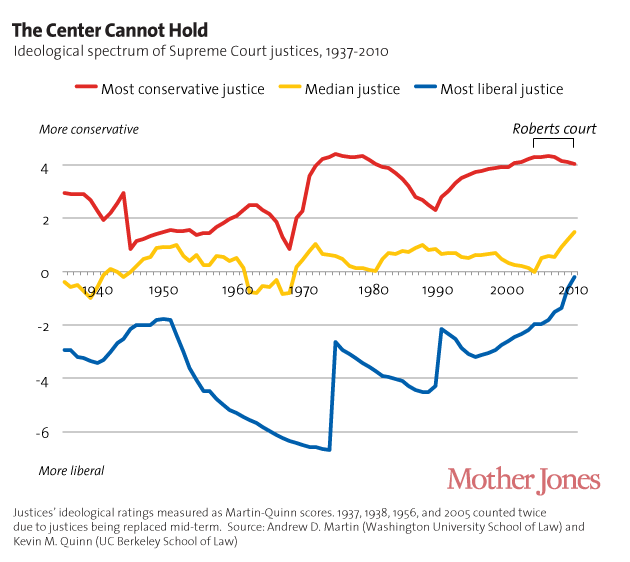 Looking at individual members of the Roberts court also shows a rightward shift in its ranks. Between 2005 and 2010, most of its five conservative-leaning members became more so. Additionally, liberal Justices John Paul Stevens and David Souter were replaced by Sonia Sotomayor and Elena Kagan, who may turn out to be less liberal than their predecessors. 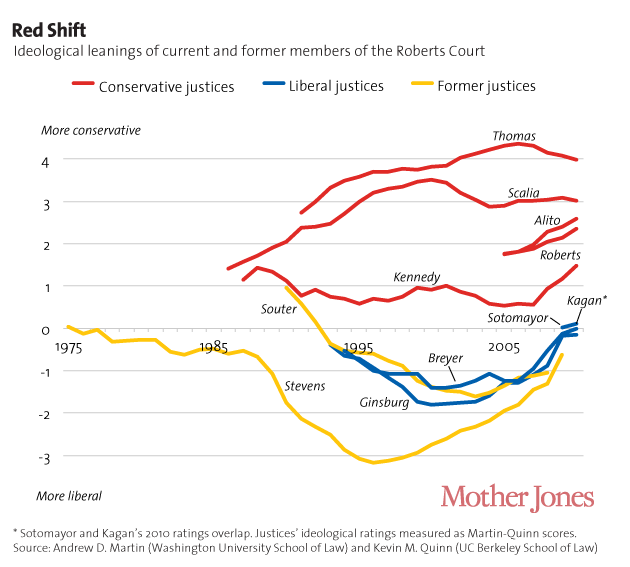 The Roberts court’s conservative makeup doesn’t always translate into conservative rulings, however. In 2010, slightly more than half of its decisions were conservative according to the Supreme Court Database. (See here for more details on how it defines liberal and conservative.) In fact, when all nine justices are in agreement, their rulings have been right down the middle. However, when the vote splits, the court’s rulings veer back to the right. 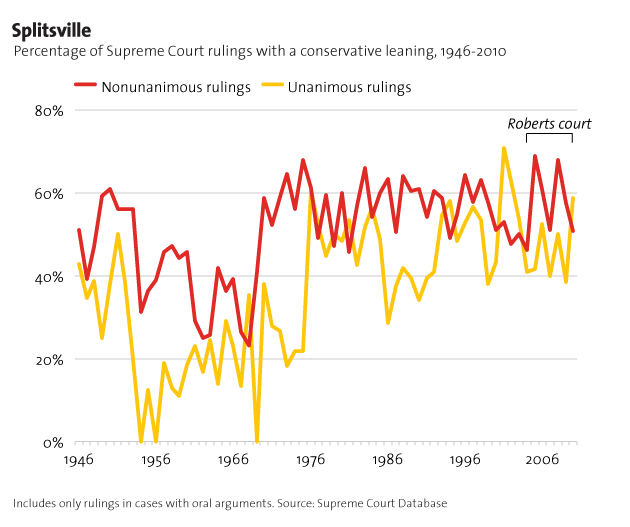 The Supreme Court data also provides context for some of the most anticipated aspects of the impending Obamacare ruling:

How will the vote split? Court watchers predict that the court will either vote against Obamacare 5-4 or uphold it 6-3. Nearly a quarter of its cases have been decided by 5-4 votes, usually resulting in a win for the conservative majority. Though not uncommon, 6-3 votes are less frequent in the Roberts court than in previous courts. 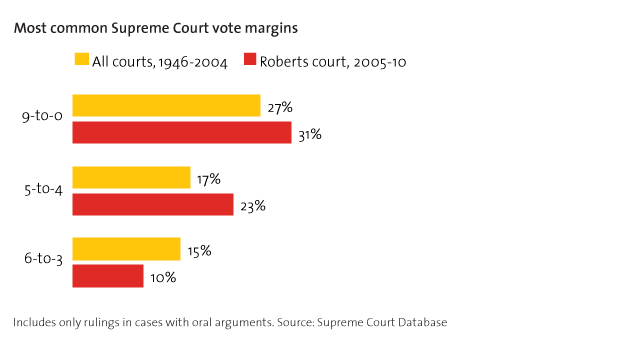 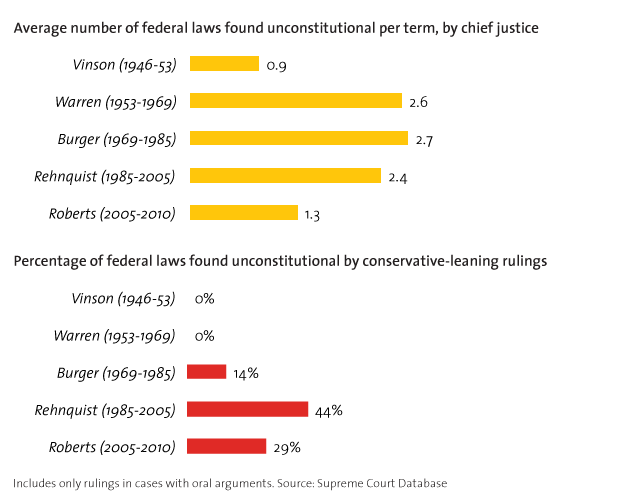 Will the court break with legal precedent? Likewise, between 2005 and 2010, the Roberts court respected precedent as much (or as little) as most of its predecessors. However, when it overruled existing Supreme Court rulings, it overwhelmingly used a conservative reasoning for its actions. 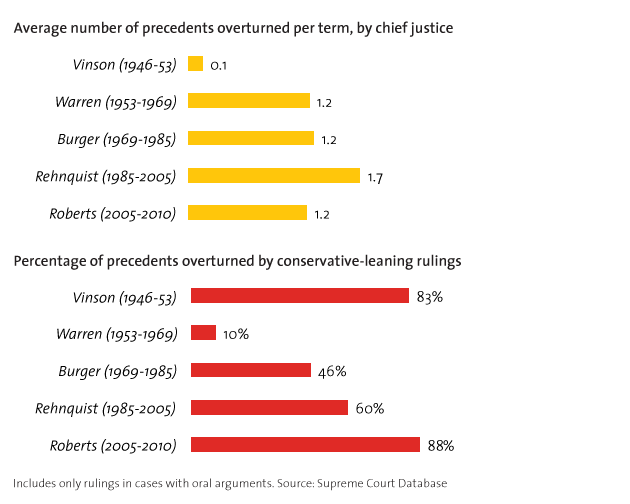 How does the court view the Commerce Clause? The court’s health care decision will hinge on its reading of the Constitution’s Commerce Clause, which gives Congress the power to regulate interstate commerce. Between 2005 and 2010, the Roberts case heard three cases involving the clause; in all three, its rulings were not conservative.

Will the court defer to the administration? Historically, the federal government has a pretty good odds of winning when it’s before the Supreme Court. As seen below, its batting average has been dropping in the Roberts court. Obama has been having a particularly hard time getting traction with the high court: UCLA law professor Adam Winkler has found that the court has ruled against the current White House in more than half of cases directly involving the federal government. 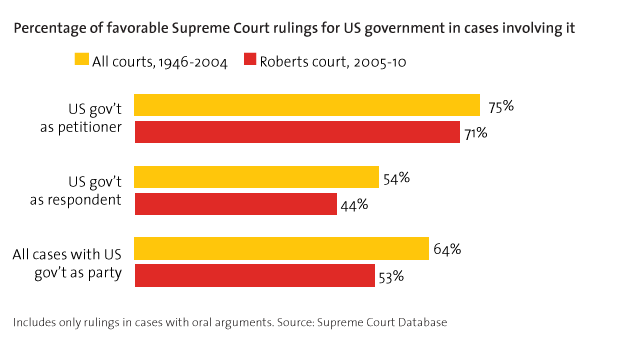 Will the court mention broccoli? The much despised vegetable has become a symbol of the health care showdown, particularly the argument that forcing Americans to buy insurance is an unconstitutional federal power grab. Broccoli was mentioned eight times during oral arguments (Justice Antonin Scalia first brought it up). The New Yorker puts the odds of a broccoli mention in the majority opinion at 1-3.

Should Scalia or his colleagues cite broccoli, it will be unprecedented: The only other broccoli reference in Supreme Court decisions between 1791 and 2005 was in a R-rated appendix to a 1978 case involving a radio broadcast of George Carlin’s “seven dirty words” routine.