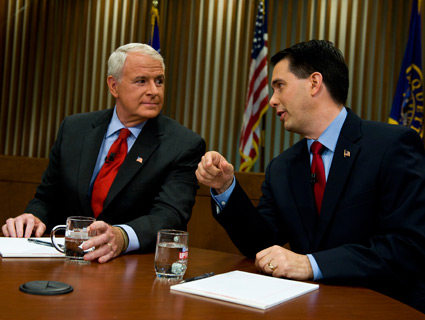 Anyone who has followed this year’s recall battle in Wisconsin knows the feeling of being buried in news stories, blog posts, tweets, rumors, and innuendo on campaign spending, crime rates, job creation, and the John Doe investigation looming over Gov. Scott Walker. “Frenzy” is a good word to describe the past 16 months in Wisconsin politics. The fight began with Walker’s anti-union “budget repair” bill and the protests against it, but since then, Democrats and Republicans have clashed continuously over the governor and his controversial agenda, and political advertisements have blanketed TV and radio.

Let’s face it: It’s hard to make sense of it all in Wisconsin. So Mother Jones has compiled 10 of the most striking statistics from the recall rumble. They give you a sense of the time, money, and manpower invested by all sides—and how much each side has at stake:

Sitting US governors before Scott Walker who faced a recall via ballot box. Those two governors are North Dakota’s Lynn Frazier, whom voters recalled in 1921, and California’s Gray Davis, who got the boot in 2003.

Walker’s lead over Barrett in RealClearPolitics‘ polling average, a number that takes into account polls from as early as August 2011.

Total spending on Scott Walker’s recall election by candidates and outside political groups through the final days before the election. That sum shatters the previous record of $37.4 million in the 2010 gubernatorial election.

The margin by which Walker is beating Barrett in the political money wars. Since January 2011, Walker’s campaign has raised $30.5 million; Barrett has raked in $4 million since entering the race in March.

The proportion of Scott Walker’s recall donations that have come from donors outside of Wisconsin. Walker’s opponent Tom Barrett has highlighted this statistic to back up his attack on Walker as a right-wing “rock star.”

Volunteers signed up for the labor-backed We Are Wisconsin coalition. In the 96 hours before Election Day, that volunteer army knocked on 1.4 million doors throughout the state and made 1.5 million calls to eligible voters.

The number of voter contacts the Republican Party of Wisconsin made in the past year. Spokesman Benjamin Sparks describes it as “the largest grassroots campaign Republicans have ever had in the state.” (In the most recent count, there were 3,270,637 registered voters in Wisconsin.)

The proportion of people who say they’ve stopped discussing politics with someone because after a disagreement over Walker or the recall elections.

Current and former Walker aides, associates, and supporters granted immunity by a circuit court judge in exchange for testifying in the two-year-old “John Doe” investigation examining activities that took place in Walker’s office when he was Milwaukee County executive.

Official projected turnout among voting-age adults in Tuesday’s election. The highest recorded turnout in a Wisconsin midterm gubernatorial election was 52 percent in 1962. Milwaukee Journal Sentinel political guru Craig Gilbert writes that the 60-to-65-percent-turnout forecast is “more or less insane.” But then again, these are not normal times in Wisconsin.

See more stats on Dark Money behind the Walker recall.