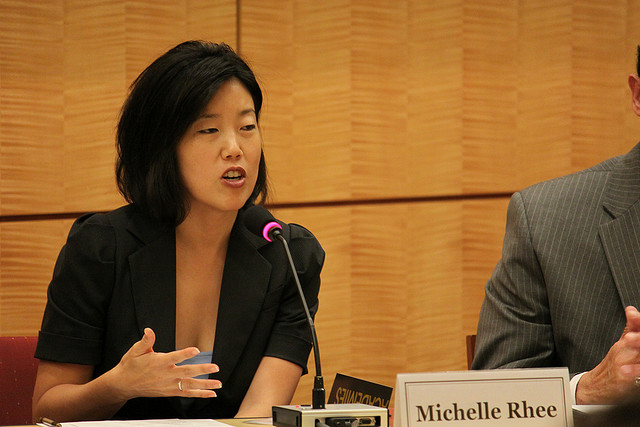 On February 12, 2011, the day after Walker unveiled his anti-union budget “repair” bill known as Act 10, Walker’s communications director Chris Schrimpf told colleagues that he believed teachers would put up a formidable fight over Walker’s assault on unions. “It seems from the coverage overall that the teachers are going to be the greatest opposition to this, which makes sense since they are in every community and can talk about ‘the kids,'” Schrimpf wrote. “Communicating to them and correcting their message will be key.” Schrimpf suggested sending letters to teachers, superintendents, and school boards touting Walker’s bill.

In a subsequent email, Schrimpf takes his teacher outreach idea one step further by bringing up Rhee: “I wonder if we should talk to michelle rhee’s group, students first. If we could get her to come do something that would give us a lot.”

Here’s the exchange with Schrimpf’s emails, released as part of an open records request:

Schrimpf was right about the teacher outrage. Teachers in Madison staged “sick-outs” the week after Walker unveiled Act 10, shutting down the city’s schools for several days. Hundreds, if not thousands, of teachers joined the throngs of protesters marching in the streets around the state capitol to protest Walker’s anti-union bill. They held aloft signs reading “Your Children Are Our ‘Special Interests'” and “Care about educators like they care about your child.”

Michelle Rhee, who ran the Washington, DC, schools system from 2007 to 2010, never made a big public appearance in Wisconsin as envisioned by Schrimpf. But Rhee did defend some of Walker’s anti-union measures twice on television soon after he announced his plan. “The move to try to limit what [public-sector unions] bargain over is an incredibly important one,” she said on “Fox and Friends.”

Months later, Rhee appeared alongside Walker at a DC meeting of the American Federation for Children, a hard-line conservative education organization founded by Betsy DeVos, the wife of Amway heir Dick DeVos and a funder of numerous conservative causes.

Since leaving DC, Rhee has embraced and promoted a more conservative, anti-union education reform agenda. She pushed a bill in the Tennessee legislature that ended collective bargaining for teachers, stumped for Ohio’s SB 5 bill (later repealed via referendum) which restricted bargaining rights, and has worked as an unpaid adviser to Florida Gov. Rick Scott, a tea-party-favorite who “has never met a voucher or a charter school he doesn’t like,” as one education reporter put it.

Want to read all 97 pages of the newly released Walker administration emails? Here you go (and leave any interesting discoveries in the comments):