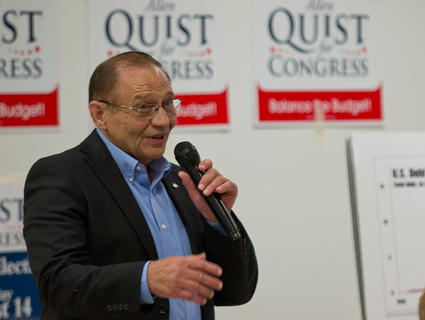 Allen Quist has a LexisNexis problem. In May, I reported on the Minnesota GOP congressional candidate’s history of out-there statements (comparing a gay counseling clinic at a state university to the Ku Klux Klan) and actions (like going undercover at bath houses and adult bookstores in order to prove that they had become a “haven for anal intercourse”). Quist, who is seeking the GOP nomination to take on Democratic Rep. Tim Walz in a district that leans ever-so-slightly Republican, is hoping support from the Christian Right and an endorsement from Rep. Michele Bachmann can carry him to victory in the mid-August primary.

These days, Quist would prefer to focus on issues like the national debt instead of, ahem, congress. But the questions about Quist’s past statements came anyway, and the candidate initially took an odd approach: he pretended none of it ever happened.

At a town hall meeting in Rochester in mid-July, Quist was asked directly about my piece, specifically an anecdote about him comparing a gay counseling center at Mankato State University to the KKK. “I just want you to know, that’s a total invention from some lefty that doesn’t like me,” Quist said. “I mean that is absolute total bull.”

But there was a paper trail. An April, 1994 story in the Minneapolis Star-Tribune reported that as a state Senator in the 1980s, Quist “alleged that Mankato State University was encouraging the spread of AIDS by sponsoring a counseling center for gays, comparing it to a center for the Ku Klux Klan.” That was in 1994; there’s no indication Quist sought a correction then, or at any time in the ensuing 18 years.

Quist also denied another story detailed in my piece, in which he went undercover at bath houses in Mankato in an effort to turn up incidents of gay sex. Quist told a Twin Cities talk show earlier this month that the gay bath house story was “a total fabrication.” As he explained it, “the thing of it is I was extraordinarily effective in the legislature. Consequently the lefties invented all kinds of stuff that they’ve said about me, and it’s mostly not true or totally taken out of context. And that happened to be one of those.”

That was apparently his first attempt to correct the record on his undercover escapades. And once again, Quist might have trouble convincing voters that they never happened, given that there are contemporary news stories recounting his bath house visit and other related inspections. For example, 19 years ago the St. Paul Pioneer Press conducted an interview with Quist where he “revealed that he personally had done some undercover research in an X-rated bookstore and graphically reported to his House colleagues the details of his findings, including booths for ‘anonymous multiple-partner sodomy’ and ‘body fluids’ on the floor.“

Likewise, Quist was asked at the same Rochester town hall meeting about a famous comment he’d made in an interview with David Brauer of the Twin Cities Reader arguing that women have a “genetic predisposition” to be subservient to men—a claim he later doubled down on. But Quist dismissed that, too, as a “magician’s-type trick” designed to distract voters. The problem: Brauer still has the audio. On Thursday, he posted a transcript of the interview and a soundbite at MinnPost. That’s some kind of trick.

Now Quist has finally decided to come clean. On Thursday, the farmer and retired college professor wrote a letter to supporters, apologizing for the Ku Klux Klan comparison (“I would not say anything like that today”) and attempting to explain the undercover gay sex sting:

The first is the allegation that, twenty four years ago, as a state legislator, I entered the Mankato adult bookstore in disguise to check out whether it included a serious public health risk. Parry’s distortion of my response to an important constituent complaint—that the bookstore posed a serious public health risk—is shameful. All I did was fulfill my responsibility as a Minnesota legislator.

Having first asked the Department of Health to investigate the matter (they did not) and being unwilling to allow an alleged public health risk to continue, I checked it out myself. Not in disguise, as my attackers would suggest, and not in sunglasses that suggests something to hide. (The reporter involved later went to work for the DFL caucus in St. Paul.)

I entered the adult bookstore dressed normally in shirt and blue jeans. The real story that won’t be printed is that I did the right thing. There was in fact a huge public health risk involved—a problem that was immediately remedied because someone had the courage to bring the issue to the light of day.

In fact people may well be alive today because I did my job. Distorting the facts and then attacking someone for having the courage to do what is right is destructive to our nation.

The campaign of Mike Parry, Quist’s rival in an August 14 GOP primary, has been attacking Quist’s oddball history. (It was their most recent salvo, on Tuesday, that prompted Quist’s apology.)

While Parry may be hoping to distinguish himself from his investigating opponent, his tea party-flavored positions could present an obstacle to his congressional hopes. As Sally Jo Sorensen at the blog Bluestem Prairie notes, Parry recently sponsored legislation to set up a legislative commission on the United Nations’ Agenda 21, a non-binding document never ratified by the Senate, that outlines basic principles of sustainable development. (Some conservatives, including Bachmann, believe Agenda 21 is part of a nefarious one-world plot to force humans to return much of rural America to the wildlife.)

Indeed, neither candidate has caught much traction; Parry had just $30,000 cash on hand, according to his July quarterly fundraising report to the Federal Elections Commission—considerably less than Quist’s $165,000, though it’s worth noting that almost all of Quist’s money came from a personal loan.

The clear winner in all of this is, in other words, is Walz, who is looking at an easy re-election campaign in a Republican-leaning district that could very well go to Mitt Romney in November.