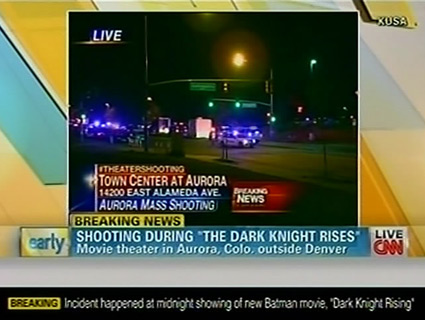 A mass shooting at a midnight screening of The Dark Knight Rises in Aurora, Colorado, has left at least twelve people dead and 58 wounded. The massacre occurred at the Century 16 cineplex at the Aurora Town Center Mall. The suspected shooter is a local resident named James Eagan Holmes who is in police custody, along with the weapons used in the shooting. There is no clear motive for the attack known at this time.

This story will be updated throughout the day as we receive more information. Click here to jump to the latest update.

How Holmes Was Armed

Holmes carried an assault rifle, a shotgun, and two pistols, the Associated Press reports. Holmes reportedly entered the theater from the emergency exit wearing a gas mask and a bullet proof vest.

According to two witnesses whose interview was flagged by the Huffington Post, he entered the theater, tossed canisters of some kind of gas, and then started shooting. “He looked so calm when he did it, it looked scary,” the witness says.

One of the witnesses says he “thought it was part of the show.”

Here’s another interview with a witness to the shooting, conducted by a local NBC affiliate in Colorado:

The witness says “we thought special effects, midnight showing, that’s awesome—what theater does that anymore?” After a few moments, the witness continues, he saw “holes in the walls” and realized that the smoke wasn’t part of the show.

Poynter, a journalism news site, has collected tweets from people who were at the movie theater in Aurora when the shooting started.

More About the Shooter

Holmes, the suspected shooter, was a former graduate student in neuroscience at the University of Colorado-Denver School of Medicine. He withdrew from the college last month. He attended Westview High School in San Diego, California, graduating in 2006. He has no previous criminal record. The city of Aurora police chief says that Holmes’ apartment contains “very sophisticated” explosives, and that police could be at the scene “for hours or days.”

According to a federal law enforcement source, Holmes had colored his hair red and told local police that he was “The Joker,” the villain in The Dark Knight (2008).

In the wake of the mass killing, other police departments across the country are now stepping up security measures at area theaters. The Paris gala premiere of the film was cancelled.

President Barack Obama was reportedly briefed on the incident early Friday morning. In light of the tragedy, the president has cancelled a campaign event in Winter Park, Florida. The White House released a statement early Friday morning, and Obama will address the shooting at 11:20 a.m. in Fort Myers, Florida. It’s common for presidents and other top national politicians to release statements in the wake of big national tragedies, and both Obama and rival Mitt Romney have already expressed “shock and sorrow” at the incident.

The Obama and Romney campaigns have both suspended running political advertisements on Colorado television stations, said spokespeople for the campaigns. Bill Burton, cofounder of the pro-Obama Priorities USA Action super-PAC, tweeted that his group was suspending its Colorado ads as well.

President Obama remarked on the shooting Friday morning at a campaign stop in Fort Myers, in southwestern Florida. He said he’d spoken with Aurora Mayor Steve Hogan and Colorado Gov. John Hickenlooper to express his and First Lady Michelle Obama’s sadness at the shooting. “The federal government stands ready to do whatever’s necessary to bring whomever’s responsible for this heinous crime to justice,” Obama said. “We will take every step possible to ensure the safety of all of our people. We’re going to stand by our neighbors in Colorado during this extraordinarily difficult time.”

The president believes that we need to take common-sense measures that protect Second Amendment rights of Americans, while ensuring that those who should not have guns under existing law do not get them…But I have nothing new—nothing additional on that for you.

In a brief conversation with Mother Jones, Joan Holley, the manager of Holley Realty who rents out units at the Aurora, Colorado, apartment building where suspected gunman James E. Holmes lived, said she is not yet speaking publicly about Holmes.

“Out of respect to the victims and other people involved, I am declining to answer any questions at this time,” Holley said.

Holley would not confirm whether she knew Holmes.

Asked if she had yet talked to the local police, she said, “I’m going to say goodbye now. I cannot answer at this time.”

According to a former resident of that building (who did not know Holmes), the building is mostly rented to college students. Holmes reportedly attended an area medical school but withdrew last month. 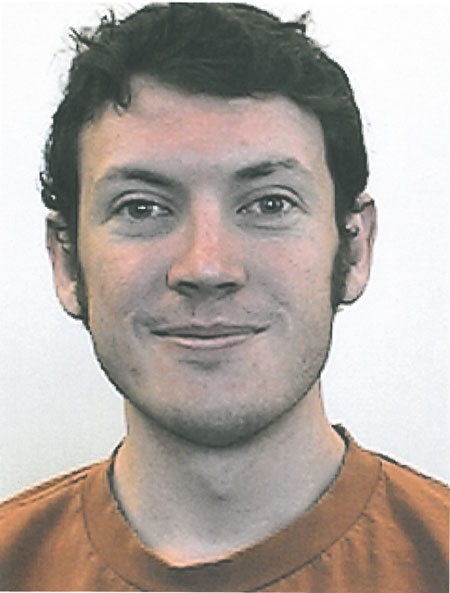 The image was sent to a local ABC affiliate by the University of Colorado, where Holmes was reportedly a student. 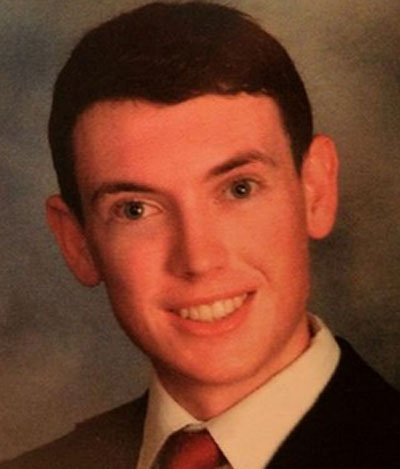 Dan Gross of the Brady Campaign to Prevent Gun Violence, the largest group in the United States of its kind, issued a statement this morning expressing sympathies to the victims’ families and survivors, and also called for action on gun laws:

This tragedy is another grim reminder that guns are the enablers of mass killers and that our nation pays an unacceptable price for our failure to keep guns out of the hands of dangerous people. We are outraged. We understand that President Obama has just spoken and so might Mitt Romney.

As someone who has suffered the lasting impact of gun violence, and President of Brady, I can tell you that we don’t want sympathy.  We want action…We are insistent that our elected leaders take action to prevent future tragedies. Political cowardice is not an excuse for evasion and inaction on this life-and-death issue.

The nation’s mayors express their shock at a mass shooting and send their condolences to the victims, their families, and their community…While we don’t yet have all of the facts in the case, we do know that all evidence this morning points to a heavily armed assailant now in police custody.

While questions about his motives and about how he obtained his weapons will be answered in the hours and days ahead, the fact remains that once again guns have been used in a mass killing of innocent people.

The U.S. Conference of Mayors is repeating its call for reasonable changes in our gun laws and regulations that could help to prevent senseless tragedies such as the one that has rocked Aurora and the nation this morning.

During a joint press conference, Aurora police chief Dan Oates told reporters that his department is “not speculating on motive” at this time. He also mentioned that the explosives for boobytrap found in alleged gunman Holmes’s apartment were “linked together with all sorts of wire.” Oates stated that the police are “not prepared to release [Holmes’] booking photo” today, and that he didn’t yet know whether or not the weapons used were possessed legally.

Dark Knight Rises stars Morgan Freeman and Marion Cotillard have pulled out of major press and promotional events scheduled for today and and this evening in France. “The whole team decided out of respect for the families to cancel the premiere,” Cotillard representative said.

Warner Bros., which is distributing the film, has not announced whether or not they will cancel future promotional events.

A high-capacity, drum-style ammo clip for the AR-15 was also used in the massacre, according to the Associated Press. (Click here, here, and here for Mother Jones‘ past coverage of these kinds of large gun clips.) Here’s a photo of a precision built, ultra-high capacity, drum-style magazine for an AR-15: 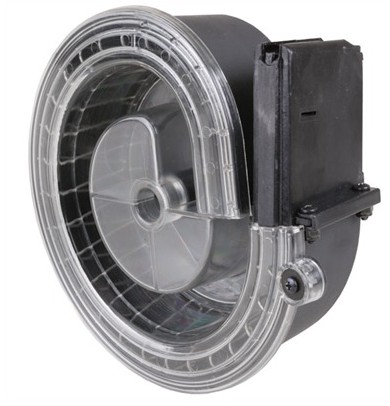 US Navy and Air Force service members were among the injured. The Department of Defense released the following statement:

The Department of Defense is deeply saddened by the news of the tragic incident at the Aurora Mall Movie Theater in Aurora, Colo. Our thoughts and prayers are with the victims and the families of those impacted by this event.

One sailor was injured and one, known to have been at the theatre that evening, is currently unaccounted for. Two airmen were injured in the incident. The Navy and the Air Force are working with the families of these service members to ensure they have the care and attention they need.

We can also confirm that the alleged gunman in this incident, James Holmes, is not a past or current member of any branch or component of the U.S. Armed Forces.

Physicians at University of Colorado Hospital in Aurora treated 23 of the most critically wounded victims.

Christopher Nolan, the director of The Dark Knight Rises, issued a statement on the mass shooting:

Speaking on behalf of the cast and crew of The Dark Knight Rises, I would like to express our profound sorrow at the senseless tragedy that has befallen the entire Aurora community.

I would not presume to know anything about the victims of the shooting but that they were there last night to watch a movie. I believe movies are one of the great American art forms and the shared experience of watching a story unfold on screen is an important and joyful pastime.

The movie theatre is my home, and the idea that someone would violate that innocent and hopeful place in such an unbearably savage way is devastating to me.

Nothing any of us can say could ever adequately express our feelings for the innocent victims of this appalling crime, but our thoughts are with them and their families.