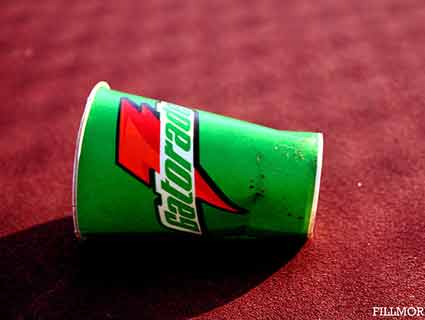 Just in time for the Summer Olympics in London, a top science journal has issued a blistering indictment of the sports drink industry. According to the series of reports from BMJ (formerly British Medical Journal), the makers of drinks like Gatorade and Powerade have spent millions in research and marketing in recent decades to persuade sports and medical professionals, not to mention the rest of us suckers, that a primal instinct—the sensation of thirst—is an unreliable guide for deciding when to drink. We’ve also been battered with the notion that boring old water is just not good enough for preventing dehydration.

I’ve been as susceptible to this scam as anyone else; I knew, or thought I knew, that if I’m thirsty after my half-hour go-round on the elliptical trainer, it means I was underhydrated to begin with. So for years I’ve been trying to remember to ignore my lack of thirst and make myself drink before working out. Not any more.

The BMJ‘s package of seven papers on sports performance products packs a collective wallop. The centerpiece is a well-reported investigation of the long-standing financial ties between the makers of Gatorade (PepsiCo), Powerade (Coca-Cola, an official Olympic sponsor), and Lucozaid (GlaxoSmithKline) with sports associations, medical groups, and academic researchers. It should come as no great surprise that the findings and recommendations that have emerged through these affiliations have tended to include alarming warnings about dehydration and electrolyte imbalance—warnings that conveniently promote the financial interests of the corporate sponsors.

And who knew there was something called the Gatorade Sports Science Institute? According to the BMJ investigation, “one of GSSI’s greatest successes was to undermine the idea that the body has a perfectly good homeostatic mechanism for detecting and responding to dehydration—thirst.” The article quotes the institute’s director as having declared, based on little reliable evidence, that “the human thirst mechanism is an inaccurate short-term indicator of fluid needs.”

Another study in the BMJ package finds that the European Food Safety Authority, which is authorized to assess health claims in food labels and ads, has relied on a seriously flawed review process in approving statements related to sports drinks. A third study reports that hundreds of performance claims made on websites about sports products, including nutritional supplements and training equipment as well as drinks, are largely based on questionable data, and sometimes no apparent data at all. One overall theme emerging from the various papers is that much of the research cited was conducted with elite and endurance athletes, who have specific nutritional and training needs; any such findings, however, should not be presumed to hold for the vast majority of those who engage in physical activity.

Critics have long blasted sports drinks as being loaded with calories and unnecessary ingredients. (Not to mention concerns about the environmental costs of producing, shipping, and discarding all those millions of plastic bottles.) Yet the product category represents a lucrative and growing market, with US sales of about $1.6 billion a year, according to the BMJ. In fact, Powerade is the official sports drink of the London Olympics, and Coca-Cola is hyping the brand with a campaign featuring top-tier athletes.

The BMJ papers address two related but distinct questions: Should people who exercise seek to proactively replace fluids lost, or can they rely on thirst to guide them during and after physical activity? And when they rehydrate, do they need all the salts, sugars, and other ingredients dumped into sports drinks, or is water fine? The correct answers are: best to rely on thirst, and water is fine. All that stuff about replacing electrolytes and so on you’ve been hearing all these years? Never mind! The evidence doesn’t support it.

Overhydration presents a far greater risk of serious complications, and even death, than dehydration.

In a commentary accompanying the investigations in the journal, Timothy Noakes, chair of sports science at the University of Cape Town, points out that overhydration presents a far greater risk of serious complications, and even death, than dehydration. Moreover, he notes, the notion that fluid and electrolytes must be immediately replaced is based on a fundamental misunderstanding of our past as “long distance persistence hunters” in arid regions of Africa.

“Humans do not regulate fluid balance on a moment to moment basis,” Noakes writes. “Because of our evolutionary history, we are delayed drinkers and correct the fluid deficits generated by exercise at, for example, the next meal, when the electrolyte (principally sodium but also potassium) deficits are also corrected…People optimize their hydration status by drinking according to the dictates of thirst. Over the past 40 years humans have been misled—mainly by the marketing departments of companies selling sports drinks—to believe that they need to drink to stay ‘ahead of thirst’ to be optimally hydrated.”