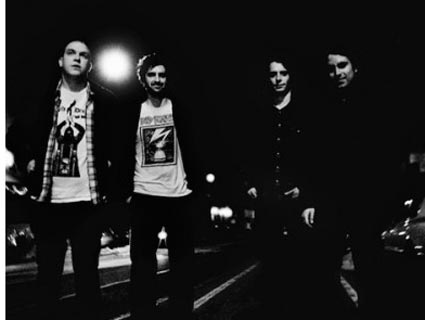 It’s a Sunday night at San Francisco’s Bottom of the Hill—a glowing, dimly lit stakeout of a rock venue—and I’ve never seen anything quite like it: A guy in the audience who’d hobbled into the crowded room on crutches is now standing near the front of the stage, bouncing up and down, holding those crutches over his head.

The band that apparently has the power to heal the sick—or at least make him forget about the pain until after the show—is post-punk foursome the Men, and the song is a track off their latest album, Open Your Heart. Lanky bassist/producer Ben Greenberg also bounces; guitarists/vocalists Mark Perro and Nick Chiericozzi lunge their instruments at negative space; drummer Rich Samis rolls and flicks his head in furious rhythm. A third of the room is a mosh pit. I desperately fish around in my bag for the earplugs I’ve left at home, then realize that tinnitus is inevitable.

It’s okay—I’ve made my peace. Back in Brooklyn, the Men enjoyed a reputation for two things: First, being one of the loudest yet most versatile bands around. Second: Not giving a fart about how anyone (i.e. bloggers) tried to pigeonhole their sound according to one of many noise, psychedelic, or classic rock reference points. The result, maybe, is the rare energy of shows like these, and albums that can slap an indie listener out of background-music worship. The lost frequencies are worth it.

The Men have been playing together, albeit with a radically different lineup, since 2008, putting out limited, self-released LPs and a number of cassettes before striking internet gold with their raw, vicious 2011 Sacred Bones debut Leave Home. But where Leave Home tore through your headphones, 2012’s Open Your Heart scoops you into a powerful bear hug—with fast, instantly listenable riffs, melodies that stick to the inside of the skull, and even some meditative, guitar-driven spells à la Neu!. “We’re just trying to do what’s real to us,” Perro told the Village Voice earlier this year, when asked about the band’s evolution. “What happens from there is what happens.”

What happened from there was that three months later, the Men were recording yet another album, this time on the side of a mountain in the Catskills. When I caught up with them a week after their San Francisco gig, in the middle of their continental tour, half of the Men—Greenberg and Samis—crowded around a phone outside a bar by Joshua Tree to tell me a bit more about it. Here’s what we got before their cell phone died.

Mother Jones: Where are you right now?

Ben Greenberg: Right now there’s someone covering Fleetwood Mac in a bar, and we’re surrounded by sand and the desert.

MJ: What do you listen to on the road?

MJ: Why’d you guys record your new album in the Catskills?

BG: It was really good to get out of town. I think it was good for everyone, honestly. We did a lot of writing up there. We came up with a few songs and we came back with a ton.

MJ: Describe the surroundings for me.

BG: We were on the side of a mountain. And there was no one around. There was a campfire. We built a huge fire and recorded a bunch of stuff out there too, but that stuff’s not going to be on the record. I don’t know, it might. I guess I shouldn’t say that. [Laughs.] We rented this house, and it was a vacation rental basically. So we gutted it and moved in our studio stuff, and took it over for two weeks, and basically got to do whatever we wanted for 24 hours a day. So we worked our asses off and came back with 19 songs. And now we’re trying to figure out what’s going on the record.

MJ: How do you think your physical surroundings affected the sound?

BG: Well, Hurricane Irene had just come through shortly before we were there. When we were driving around trying to find the house. It’s kind of spooky, but…it was really still. It was like, forcibly still. I don’t know if the record’s like that though. I think the record sounds like the house. That’s how I would describe it. I can send you a picture of the house. 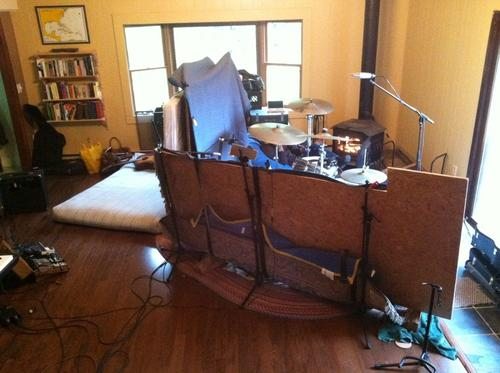 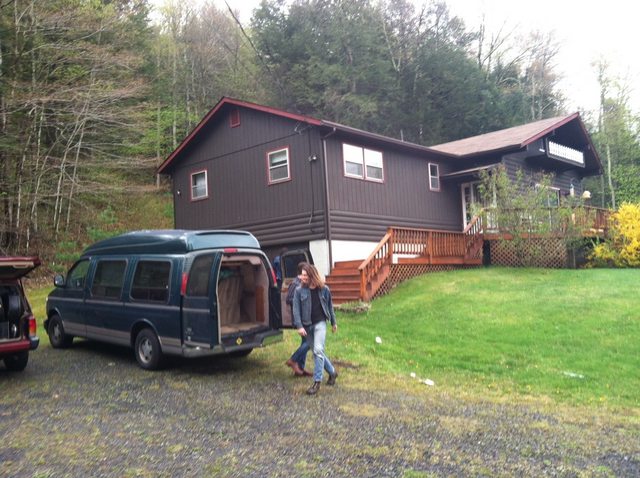 MJ: Ben, you produced the band’s last two records, but you also have a solo project, Hubble, and you were in Zs and Pygmy Shrews. Hubble and Zs have more of a minimalist, experimental bent—did that make its way onto the new recordings?

MJ: Can you speak about your approach to recording the new stuff?

Rich Samis: We were definitely going for a more live approach. We spent a lot of time placing different mics in the room, making sure it sounded very live. Another difference was, when we recorded the album the vocals were recorded live—we were all playing at the same time.

MJ: If there’s one question you wish music journalists would never, ever ask you again, what would it be?

RS: People compare us to The Replacements or Dinosaur Jr., Sonic Youth. I think something that separates us from other bands—a lot of other bands are going for another sound, and they do that sound to a T. Like, we’re going to do this garage-y thing, or we’re going to do this punk thing, and they do it, and people really like it because it’s very familiar. But for us, we really don’t give a shit about any of that. We’re like, this is a song, this is what I like about it, and we’re just going to do it.