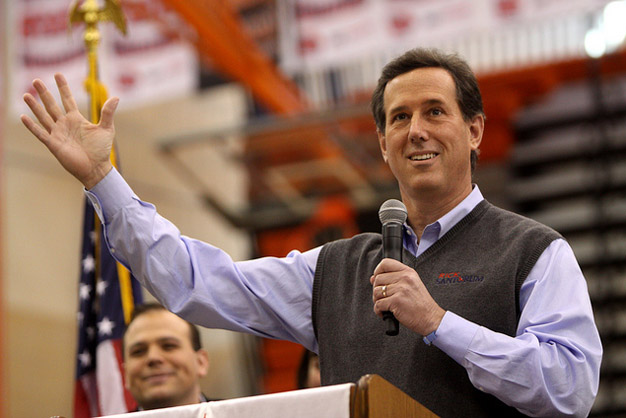 Rick Santorum, the onetime Republican presidential hopeful, has joined the dark-money arms race, but his new nonprofit, Patriot Voices, could well find itself in trouble with the tax man.

It’s no shocker that Santorum and his outfit want to see Obama booted. But the problem is, given the laws governing nonprofits, Patriot Voices is not supposed to tell this particular truth. Having done so, it may wind up in hot water with the Internal Revenue Service.

Tax law experts say Santorum’s organization could run afoul of the IRS for such an overly political, GOP-centric mission. Patriot Voices says it is a 501(c)(4) nonprofit, also known as a “social welfare” organization. 501(c)(4)s, which do not have to disclose their donors and are tax-exempt, are not permitted to make overt political activities, such as defeating Obama or electing conservative candidates (which the group also intends to do), its primary activity. These sort of nonprofits are supposed to have wider missions, but are often used by partisans to influence elections under the guise of promoting issues, not candidates. For instance, they run ads attacking or hailing a candidate for supporting or opposing a particular policy without specifically calling on the public to vote for or against him or her. Still, the operating fiction is that their top priority is not electoral politics.

Marcus Owens, a Washington, DC, attorney who represents nonprofits and who used to run the IRS’s exempt organizations division, says the IRS scrutinizes 501(c)(4)s like Patriot Voices to ensure they are benefiting the broader community, not just the interests of a private entity—say, Rick Santorum, Patriot Voice’s funders, or the Republican Party. Owens says Patriot Voices appears to have “a significant political component” and could face trouble with the IRS. If the IRS examines Patriot Voices, he says, it “would see very little broad community benefit that’s required” to be a 501(c)(4).

Frances Hill, a tax law professor at the University of Miami Law School, says that if defeating Obama is Patriot Voices’ most important objective, “then they’re not a (c)(4). Their goose is cooked.”

Patriot Voices did not respond to a request for comment.

Owens compared Santorum’s new nonprofit to another 501(c)(4) named Emerge America that recently saw its tax-exempt status revoked by the IRS. Emerge America trains female Democratic political candidates around the country with a goal of “getting more Democrats into office and changing the leadership—and politics—of America,” according to its 2010 tax filing. Referring to Emerge America, Owens says: “Here’s an organization that seems to be doing exactly what you would expect a political action committee to do, but it’s hiding its donors by claiming (c)(4) status under the tax law.” (Emerge America is now a so-called 527 organization, which discloses its donors and can focus on politics.)

One big advantage of a (c)(4) is that it allows big-money funders to influence the political process without being exposed to public scrutiny. And Patriot Voices will not have to file information about its activities (how much money it took in, what it spent the money on) with the IRS until well into 2013, Owens notes. Moreover, information it provides regarding the identity of its funders will not be made public. Santorum’s nonprofit could raise and spend large chunks of campaign cash from private sources to defeat Obama and then wind down after the election—all before its first significant filing deadline.

Politically active nonprofits are the new flash point between political operatives and good-government types. Despite all the attention lavished on super-PACs (which do disclose donors), 501(c)(4) nonprofits outspent super-PACs by a 3-2 margin during the 2010 election cycle, according to the Center for Public Integrity. Shadowy nonprofits including Rove’s Crossroads GPS and the American Action Network, run by former Sen. Norm Coleman, are playing an even more crucial role in the 2012 elections: 91 percent of all political advertising through late April was paid for by these nonprofits.

Regulators are taking notice. New York Attorney General Eric Schneiderman is investigating whether the National Chamber Foundation, an affiliate of the powerful US Chamber of Commerce, illegally funneled $18 million to the US Chamber for political and lobbying work. And the IRS has begun reviewing the 501(c)(4) status of Crossroads GPS, a cash-flush group founded by GOP strategists Karl Rove and Ed Gillespie.

Consequently, it’s odd—or dumb—that Santorum’s Patriot Voices would be so upfront in describing its core task as the defeat of Obama. A (c)(4) nonprofit is not supposed to be that blunt. But Patriot Voices has essentially waved an “Investigate Us!” banner in front of its “Open for Business” sign. With scrutiny of nonprofits growing by the day, Frances Hill, a former attorney who represented tax-exempt groups, says she’s surprised by Patriot Voices’ explicit iteration of a political agenda. “I would never advise [a client] to say something like that,” Hill says. “And if they had something said like that, I would help them carefully walk it back.”

In the press release announcing the group’s launch, Santorum declares, “Patriot Voices will transform the political landscape of our country.” Perhaps. But first it will have to avoid being declared illegal by the IRS.