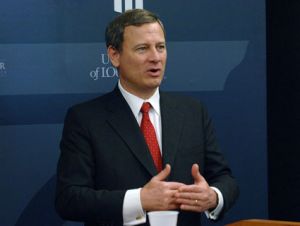 Chief Justice John Roberts shocked conservatives last week when he rescued the Affordable Care Act by voting with the high court’s Democratic appointees to uphold the individual mandate—the part of Obamacare that requires Americans to buy insurance or pay a fine—as constitutional under the federal government’s power to tax. Roberts’ decision has set off a frenzy of punditry speculating on Roberts’ inner motivations, fueled in part by a report from CBS News’ Jan Crawford that suggests the Chief Justice buckled to political pressure.

There were countless news articles in May warning of damage to the court – and to Roberts’ reputation – if the court were to strike down the mandate. Leading politicians, including the president himself, had expressed confidence the mandate would be upheld.

Some even suggested that if Roberts struck down the mandate, it would prove he had been deceitful during his confirmation hearings, when he explained a philosophy of judicial restraint.

It was around this time that it also became clear to the conservative justices that Roberts was, as one put it, “wobbly,” the sources said.

Crawford’s report, while extremely interesting, relies on a bit of mind-reading by her sources, several of whom assume the Roberts caved because of public opinion. The reaction to the story and to Roberts’ decision in the right-leaning media has been harsh. The American Spectator accused Roberts of committing “constitutional treason,” conservative media maven Matt Drudge suggested Roberts’ mind was addled by epilepsy. At National Review, Avik Roy concluded that “the bottom line, if Jan Crawford is right, is that conservative justices can be blackmailed by left-wing editorialists.” At the libertarian Reason magazine, Peter Suderman writes that “if the story and its speculation about the reasons behind Roberts’ switch are true,” then Roberts flipped his vote “because prominent Democrats and liberals threatened to throw a temper tantrum if he didn’t vote the way they wanted.”

Meanwhile, former Supreme Court reporter Linda Greenhouse of the New York Times noticed that conservative pundits started complaining about the liberal media putting “the squeeze to Justice Roberts,” about a month ago. According to Greenhouse, that evidence suggests the possibility that conservative clerks or other individuals with knowledge of the court’s deliberations leaked news of Roberts’ heresy to conservative pundits, who then waged their own campaign to pressure Roberts into changing his vote.

All of this points to the reality that the court, although not merely a partisan institution—ideology and personal motivations play roles as well—is highly partisan. When liberals assumed the mandate was going to be struck down, they wailed about the loss of the court’s legitimacy—James Fallows of the Atlantic suggested that a “coup” had taken place. Conservatives responded with mockery: Yuval Levin at National Review wrote that “these people are actually saying that any outcome except the one they want must be driven by an outcome-oriented political crusade.” Now conservatives, furious they didn’t get the ruling they wanted, are basically saying the same thing Fallows did. Most of Justice Roberts’ conservative defenders aren’t claiming he was objective and impartial—they’re praising his cleverness for supposedly securing a “stealth victory” for conservatives by limiting the federal government’s ability to pass new laws under the Constitution’s Commerce Clause. I don’t know why Roberts switched his vote, or even if he switched his vote, but it’s clear many conservatives are angry he didn’t behave like a proper member of the team.

There’s something valuable to society in insisting that judges not be partisan figures and interpret the law and the Constitution objectively. But the entire conservative legal movement since Roe v. Wade legalized abortion has been devoted to packing the courts with judges who would rule the way conservatives wanted. Conservatives have been incredibly effective in presenting their legal views as the “correct” ones, but the reality is that conservative views of the Constitution are no less ideological than liberal views of the Constitution. The excuse that this is ideology rather than partisanship doesn’t wash—legal ideology tends to track very closely with the partisan preferences of political parties.

No one exemplifies the lack of daylight between partisanship and ideology better than John Yoo, the Bush-era Justice Department official who has joined his conservative colleagues in bashing Roberts. Yoo advises the next Republican president to appoint justices who are like “Scalia or Thomas or Alito, not Roberts.” In 2004, discussing the perpetually fence-sitting Republican appointee Justice Sandra Day O’Connor, Yoo asked, “if you’re just switching back and forth all the time, if you’re in the middle all the time, are you really being a judge[?]”

Conservatives want their judges to consider themselves card-carrying members of the conservative movement, and at the same time they want those judges’ rulings, when handed down, to be treated with unquestionable legitimacy even by those who disagree with the decisions. When those judges diverge from the goals of the movement, they are pilloried as though they were heretical senators or members of Congress, conservative angish only magnified by the knowledge that the infidels cannot be knocked back in line by a competitive primary. Having excoriated liberals for calling the court partisan, conservatives are now gnashing their teeth because the court failed to be as partisan as they wanted. That makes the complaints about politics supposedly driving Roberts’ decision ring hollow. They wanted politics to drive the decision. They just wanted it to go their way.