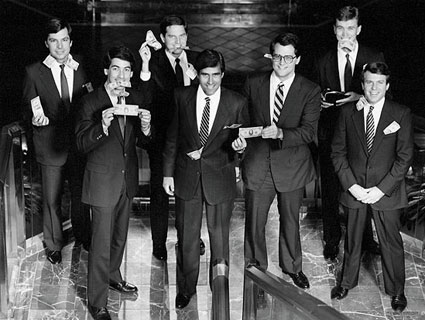 Mitt Romney (center) and his Bain Capital buddies mug for the camera.Bain Capital.

David Corn published an important story Monday morning about Mitt Romney’s time at Bain Capital, the private equity firm Romney co-founded. Using documents from the Securities and Exchange Commission, David proves that Romney was involved with Bain’s investment in Stericycle, a medical waste firm that has been criticized by opponents of abortion rights for disposing of aborted fetuses. Just as important, though, is the evidence that Romney was signing important documents for Bain—and running Bain-associated companies—well after February 1999, the point when both the Romney campaign and Bain itself claim that Romney left the firm. Here’s the key paragraph from David’s piece:

The Stericycle deal—the abortion connection aside—is relevant because of questions regarding the timing of Romney’s departure from the private equity firm he founded. Responding to a recent Washington Post story reporting that Bain-acquired companies outsourced jobs, the Romney campaign insisted that Romney exited Bain in February 1999, a month or more before Bain took over two of the companies named in the Post‘s article. The SEC documents undercut that defense, indicating that Romney still played a role in Bain investments until at least the end of 1999.

The Post and the Obama campaign have been attacked for criticizing Romney about deals that Bain made after Romney supposedly left the company in February 1999. But as the government documents and Bain statements highlighted by David demonstrate, Romney remained involved with Bain at least through the end of 1999—and perhaps longer. Here’s another key section, in which Bain directly contradicts the contents of a document that Romney himself signed:

In response to questions from Mother Jones, a spokeswoman for Bain maintained that Romney was not involved in the Stericycle deal in 1999, and insisted he had “resigned” from the company months before the stock purchase was negotiated. The spokeswoman noted that following his resignation Romney remained only “a signatory on certain documents,” until his separation agreement with Bain was finalized in 2002. And Bain issued this statement: “Mitt Romney retired from Bain Capital in February 1999. He has had no involvement in the management or investment activities of Bain Capital, or with any of its portfolio companies since that time.” (The Romney presidential campaign did not respond to requests for comment.)

But the document Romney signed related to the Stericycle deal did identify him as an participant in that particular deal and the person in charge of several Bain entities. (Did Bain and Romney file a document with the SEC that was not accurate?) Moreover, in 1999, Bain and Romney both described his departure from Bain not as a resignation and far from absolute. The Boston Herald on February 12, 1999 reported, “Romney said he will stay on as a part-timer with Bain, providing input on investment and key personnel decisions.” And a Bain press release issued on July 19, 1999, noted that Romney was “currently on a part-time leave of absence”—and quoted Romney speaking for Bain Capital. In 2001 and 2002, Romney filed Massachusetts state disclosure forms noting he was the 100-percent owner of Bain Capital NY, Inc.—a Bain outfit that was incorporated in Delaware on April 13, 1999—two months after Romney’s supposed retirement from the firm. A May 2001 filing with the SEC identified Romney as “a member of the Management Committee” of two Bain entities. And in 2007, the Washington Post reported that R. Bradford Malt, a Bain lawyer, said Romney took a “leave of absence” when he assumed the Olympics post and retained sole ownership of the firm for two more years.

There is now an immense body of evidence that Romney was deeply involved with Bain Capital and related companies well past the February 1999 date that the campaign has previously cited. Not convinced? Read David’s piece.