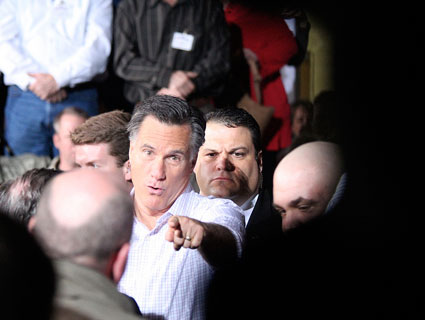 ?Mitt Romney, his campaign, and Bain Capital, the private equity firm he founded, keep insisting that Romney departed the company in February 1999 and had nothing to do with its operations and deals once he headed to Salt Lake City to take over the troubled Winter Olympics. Romney even signed a federal financial disclosure form, under the penalty of perjury, declaring that he had not been involved “in any way” with Bain after he left for Utah. Yet evidence has emerged that undermines this claim and that suggests Romney may have made a false statement on this disclosure form (which would be a potential felony punishable by a $50,000 fine and up to a year in jail). Now there’s another indication that Romney’s break with Bain wasn’t so clean—and this is according to Romney himself.

Last week, the Huffington Post reported that Romney, in sworn testimony during a 2002 Massachusetts hearing to determine if he met the residency requirement to run for governor, declared that he had remained on the board of a company in which Bain was an investor. This scoop received much attention. Still, the Romney camp did not directly respond to it, and in interviews with the major television networks on Friday, Romney insisted, as he told ABC News’ Jonathan Karl, that he had “no role with regards to Bain Capital after February 1999.” He maintained that all the questions regarding his stint at Bain were merely part of the Obama campaign’s “kill Romney” strategy.

Yet during that 2002 hearing—in a remark that has not been previously reported—Romney said that after he departed Bain in February 1999 he went through a transition period regarding his work in Boston.

When a lawyer challenging his eligibility asked Romney, “Did you remain more or less continuously in Salt Lake City from February ’99 to the end of the year,” Romney answered:

Actually, there was some transition away from my work in Boston for the first few months and then I pretty much stayed there after.

Trying to clarify this, the lawyer, after referring to this “transition,” asked, “So from February through the end of the year you were pretty much full-time out in Utah, right?”

Romney replied: “Well again, the beginning of the year was a good deal of time back and forth, but towards the last half of the year it was pretty much exclusively in Utah.”

With these statements, it seems Romney was saying that because he remained involved in Bain matters during a transition period, he traveled to and from Massachusetts for several months. The problem for Romney is, he’s now insisting—and he signed a federal form declaring—he had no participation in Bain (besides owning the company and its various entities) once he headed to Utah. During this current controversy over his role at Bain, he has not said anything about a transition period.

Asked to comment on this portion of Romney’s 2002 testimony, his campaign forwarded a statement it had previously released: “After extensive hearings the bipartisan [Massachusetts] Ballot Law Commission came to the same conclusion as numerous independent fact checkers in finding that Mitt Romney ended his active employment with Bain Capital in 1999.” But the Ballot Commission was not tasked with investigating the matter of Romney’s separation from Bain; it was not a major part of the hearing. A Romney campaign aide speaking on background notes, “Think about the 2002 Ballot Law Commission testimony that you’re citing. Mitt Romney was trying to prove his residency in Massachusetts. If he were running Bain Capital while he was in Salt Lake City running the Olympics, wouldn’t it have been easier for him to say so and thus easily prove his residency?” But the issue is not whether he was running Bain after February 1999, but whether he participated at all in any of its activities and transactions.

Romney’s mention of a “transition” period for his “work in Boston” is another contradiction for him to explain. Did he testify inaccurately during that hearing—after swearing to tell the truth? Or is he now trying to create a bright line—to distance himself from Bain-related layoffs and outsourcing—that didn’t exist? Any transition time for Romney at Bain would undermine his central claim about his last days at the firm.

There may be an easy way for Romney to prove that his current account of his Bain exit is the correct one. During the 2002 hearing, when asked by the lawyer about the amount of time in 1999 he spent in Utah and Massachusetts, he said, “I actually could probably look day by day, if necessary, on calendars.”

Calendars? Might these records indicate whether Romney had any meetings or calls with Bain executives about deals or operations at the firm? An examination of such material might resolve the issue definitively. So perhaps those politicos and pundits who have called on Romney to release previous tax returns—a bipartisan group swelling in numbers—can add another set of records to the list of material the public ought to see: Romney’s calendars from 1999, a year that was a crucial turning point in his career and that has become a significant issue in this presidential campaign.