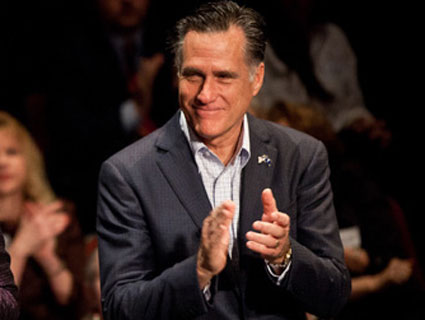 It’s an old story. Republican presidential candidates move rightward to win the GOP primary (and Democrats move left). After securing the nomination, both Republicans and Democrats move back towards the center to appeal to the broader electorate. “Everything changes” in the general election, Eric Fehrnstrom, a top Romney adviser, said in March. “It’s almost like an Etch A Sketch. You can kind of shake it up and restart all over again.” Yet so far, Romney’s actual policy ideas haven’t changed much at all. Sure, he’s softened his tone on immigration. But he hasn’t edged away from his previous proposals.

Perhaps the reason it seems that Romney hasn’t moved more to the center is that he hasn’t been particularly specific about what he would do as president. It’s hard to be seen as changing your position if no one knows what your position is. But on some issues, at least, there seems to be some potential for Romney to pick up votes by moving towards the center. A recent survey by Public Policy Polling found that picking Condoleeza Rice, who has a reputation as a moderate on domestic policy and has described herself as “mildly pro-choice,” as his running mate would be a “huge game changer,” creating a tie in Pennsylvania and dramatically narrowing President Barack Obama’s lead in Michigan. But Romney has run away from his moderate, pro-abortion rights, pro-health care reform record as governor of Massachusetts, and there is not yet a single significant domestic policy position that Romney has staked out in the general election that is significantly more centrist than the proposals he advocated in the Republican primary. How can that be?

There’s no doubt that Romney has a reputation as someone who radically shifts his positions based on the political climate. His campaign may be wagering that tacking center will only reinforce that image. They also probably want to illustrate as large of a contrast with Obama as they can. But money might have something to do with it, too. Never before has a presidential candidate been so indebted to just a few major donors. Just seven families gave the pro-Romney super-PAC Restore Our Future $15 million of the $21 million it raised in June. Gambling billionaire Sheldon Adelson has already given eight figures to pro-Romney groups. Conservative millionaires and billionaires certainly want Romney to win, but they also want to keep him on the straight and narrow. Presidential nominees have always had to answer to party machers and big money donors. But campaign donations on this huge, post-Citizens United scale carries even larger obligations.