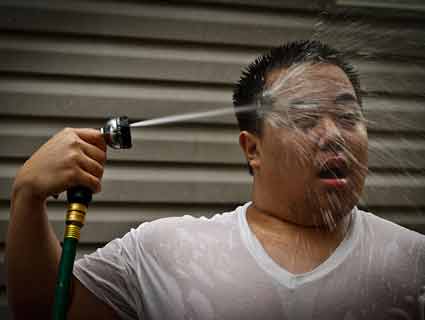 You don’t need science to tell you it’s been really crazy hot lately in much of the United States. But seriously, it’s been really stinking hot. How hot? Well, the last 12 months have been the hottest since recorded-keeping started in 1895, according to the National Oceanic and Atmospheric Administration (NOAA).

Average temperatures in the continental US for the month of June were a full 2 degrees above the average for the 20th century. It was even worse in Colorado, where temperatures for June were 6.4°F above average. In the latter half of June, 170 record temperatures were broken or tied, hitting 113 in South Carolina and 112 in Georgia, for just two examples.

Sure it’s summer, and summer is supposed to be hot. But not this hot—not without global warming at least. NOAA’s National Climatic Data Center says that the odds of this heat wave occurring randomly would be 1 in 1,594,323. Pretty low odds. Even critics of that figure say the chances of this summer happening without global warming would be extremely low at 1 in 100,000.

It’s not just this year. A new paper published by the American Meteorological Society this month, highlighted in the New York Times on Wednesday, looked at the data on 2011. That paper found that the drought due to high temperatures in Texas last year were “distinctly more probable” than they would have been 40-50 years ago, thanks to global warming. And the high temperatures in the United Kingdom in November 2011 were made 62 times more likely to occur by global warming.

Of course, saying any specific weather event happened “because of” climate change is difficult. But the AMS paper does a good job of explaining what these attribution studies really show:

One analogy of the effects of climate change on extreme weather is with a baseball player (or to choose another sport, a cricketer) who starts taking steroids and afterwards hits on average 20% more home runs (or sixes) in a season than he did before. For any one of his home runs (sixes) during the years the player was taking steroids, you would not know for sure whether it was caused by steroids or not. But you might be able to attribute his increased number to the steroids. And given that steroids have resulted in a 20% increased chance that any particular swing of the player’s bat results in a home run (or a six), you would be able to make an attribution statement that, all other things being equal, steroid use had increased the probability of that particular occurrence by 20%.

Speaking of steroids, the scientists at the University Corporation for Atmospheric research (UCAR) recently made this excellent video explaining this as well: