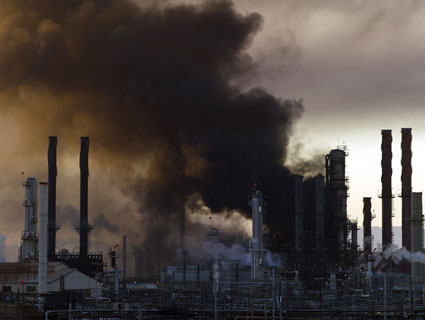 Investigators are waiting to see if it is safe to enter a smouldering Chevron oil refinery after it was ravaged by fire, sending plumes across the San Francisco bay area and Californian gasoline prices surging.

Experts warned it could take months to repair the refinery in Richmond, a 2,900-acre facility which refines about 150,000 gallons of gasoline daily, 15% of the state’s daily needs.

Monday evening’s blaze began in a tower and spread to at least three units used to cool water, prompting hundreds of people to seek treatment for respiratory problems and panic buying at the pumps, raising prices 11% in the bay area.

However, initial predictions that prices could exceed $4 per gallon were scaled back because spare capacity in other west coast refineries could fill much, if not all, of the gap.

“There’s room in the system to pick up the slack,” Rob Schlichting of the California Energy Commission told reporters. “The large jump we saw on Wednesday in prices I think was mostly panic buying.”

Chevron was expected to file a structural engineering and environmental report by Friday specifying how investigators could safely enter the facility.

The all-clear would let a team of Chemical Safety Board inspectors — the same which investigated the 2010 Deepwater Horizon oil spill in the Gulf of Mexico – to begin sifting through the charred equipment of a refinery which opened in 1902.

The Environmental Protection Agency’s Toxic Release Inventory lists the refinery as one of California’s top emitters of toxic chemicals. It has been cited by San Francisco Bay area regulators for violating air regulations 93 times in the past five years, reported AP. The number increased from 15 violations in 2007 to 23 in both 2010 and 2011.

The fire began after vapour ignited but the cause remained unclear. A second, smaller fire erupted on Wednesday. Chevron issued a statement saying it resulted in “no injuries, presented no immediate threat to the public and was extinguished in minutes.”

The company said the refinery was now partially operating, but did not say how much it was producing, nor the extent of damage and likely duration of repairs.

“They’ve got to rebuild them, and that will take a while. If they work 24/7, it will still take a while. Some of this stuff is not available off the shelf; the parts have to be ordered. They can scour the country, but it’s not a like a car part. You’re not going to fix it in a couple days.”

A 2008 hurricane which closed Gulf coast refineries sent prices in the south east briefly soaring to $5.21 a gallon. Analysts said this week’s surge in prices at California’s gas pumps – they hovered at $3.88 on Thursday – would continue but not as drastically as initially feared.