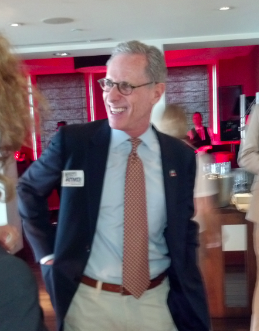 Former GOP presidential candidate and full-time Mitt Romney critic Fred KargerIf you don’t count Fred Karger, there was only one gay Republican candidate at the happy hour for gay Republican candidates on Monday at Oystercatchers, an upscale seafood joint in Tampa overlooking the St. Petersburg causeway. Nor, for that matter, in a city that’s swimming with Republican political heavyweights, were there any Republican political heavyweights in attendance. That’s not much of a surprise for a party whose draft platform sought to deny rights to gay families and tacitly endorsed the persecution of gays in Uganda and other African nations.

But Michael Carr, an internet marketer who’s running for a state Senate seat in the Denver suburbs, isn’t particularly bothered by the GOP’s anti-gay platform. “The best thing about the platform is that nobody cares about the platform,” Carr says. A member of former Utah Gov. Jon Huntsman’s LGBT steering committee (Huntsman was the only GOP candidate with an LGBT steering committee), Carr is the guest of honor at the event, hosted by the Log Cabin Republicans. He’s convinced the best is yet to come—Republicans might even nominate a pro-gay marriage presidential candidate as early as 2016.

“Politicians are looking at the data,” Carr says. “We might have someone who’s on the national stage ‘evolve.'” Everyone I talk to at Oystercatchers uses that word, “evolve,” a nod to President Obama’s own shift on gay rights.

But Carr is being diplomatic. David Valkema (“It means ‘falcon’ in Dutch”), a Romney delegate from Indiana, is less so. His beef isn’t with the homophobic leaders of the Republican party, with whom he agrees with on almost everything else. It’s with gay liberals.

“I’m sick and tired of being a Jew for Hitler,” he says. “I’m like, ‘Where’s your tolerance? You accept everyone else under the sun except for us.'” Although a recent poll showed that 44 percent of Republicans in Wisconsin—a comparatively progressive state—say they’d never vote for an openly gay candidate, Valkema thinks Republicans are quietly shifting behind the scenes. Case in point: This summer he helped convince the Indiana GOP to scrap any mention of marriage from the its platform. It wasn’t an endorsement of marriage equality, but it wasn’t a chest-beating condemnation either.

Last week, for the first time ever, Log Cabin Republicans were invited to participate in the drafting of the RNC platform—a symbolic gesture that didn’t leave much of a dent in the final product. But with gay candidates like Carr and Massachusetts congressional candidate Richard Tisei on the ballot this far, they sense a shift.

As Casey Pick, an organizer of the event puts it, “Now, the debate on LGBT equality is completely out of the closet.”