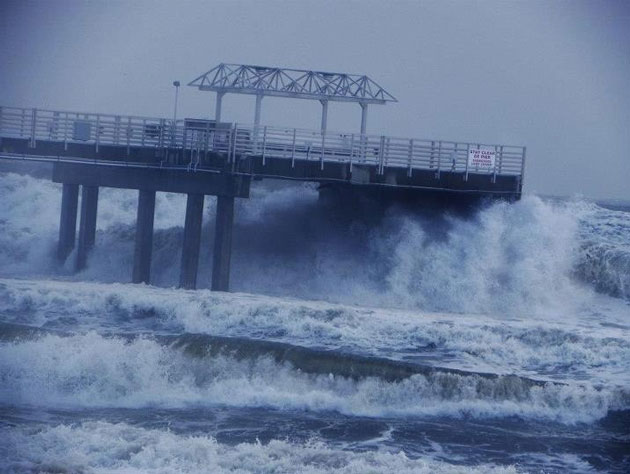 Update 8/29 2:15 EDT: Hurricane Isaac hit the Gulf Coast early Wednesday morning. Wind speeds have slowed, but the storm moving at just 6 miles per hour is expected to dump rain up to 20 inches of rain over the next day.

New Orleans’ federal levee system, given a $14.5 billion upgrade post-Katrina, has held back the storm surges so far.  Storm surges as high as 12 feet did overtop a local levee in Plaquemines Parish, Louisiana, flooding the area and leaving dozens stranded on their roofs. More than half a million Louisiana residents are also without power. Isaac is expected to weaken as it continues inland, with rain continuing for another day.

Exactly seven years to the day since Katrina hit, Hurricane Isaac is set to make landfall in Louisiana and Mississippi Wednesday morning. Isaac didn’t rain too hard on the GOP’s convention parade in Tampa, but the slow-moving and large Category 1 hurricane can still do a plenty of damage as it heads up the Mississippi.

For starters, the area covered by Hurricane Isaac is huge. The storm’s outer edges are raining down on Florida and North Carolina, some 200 miles from the eye of the hurricane. The hardest hit areas along the Gulf will likely be dumped with over 24 hours of heavy rain. Earlier today, President Obama signed a declaration of emergency in Mississippi. Offshore oil rigs, which have reported wind speeds of 90 mph, are also being evacuated.

High winds create the biggest threat to coastal regions: storm surges. The crests of water pushed ashore by hurricane winds flood and destroy all property in their path. The National Oceanic and Atmospheric Administration (NOAA) earlier tweeted out a specific warning explaining the danger of storm surges.

In 2005, storm surges caused by Katrina overwhelmed the levee system, wrecking catastrophic damage across New Orleans. Isaac doesn’t have the Category 5 intensity of Katrina, but even a Category 1 hurricane can do plenty of damage. For example, Hurricane Claudette in 2003 battered the coast of Texas for more than 24 hours, causing $180 million in damage. Aside from storm surges, long and heavy rain from Hurricane Isaac can cause flooding on its own.