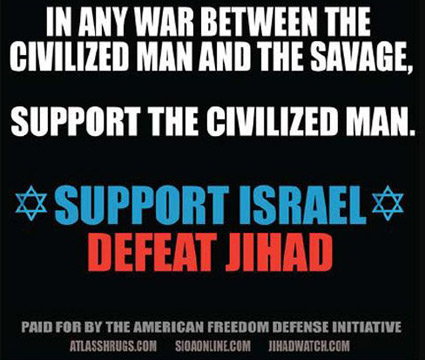 San Francisco’s Municipal Transportation Agency, Muni, has been under fire for accepting ads referring to Arabs and Muslims as “savage” that were placed by anti-Muslim activist Pamela Geller. The ads declare that “in any war between the civilized man and the savage, support the civilized man”—a paraphrase of an Ayn Rand quote—while also urging readers to “support Israel” and “defeat jihad.” If Muni had rejected the ads, however, it likely would have violated Geller’s First Amendment rights; when New York’s Metropolitan Transportation Authority tried to block Geller’s ads last year, Geller sued, and in July a judge later declared the agency’s ad policy unconstitutional.

Though Muni may have to run the ads, it has taken the unusual step of posting its own ads denouncing Geller’s campaign, ABC’s San Francisco affiliate reports. Here’s a screenshot: 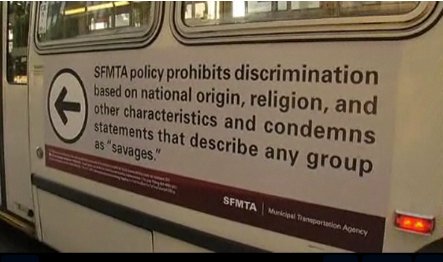 The arrow in the image points to Geller’s ad, functioning as a kind of disclaimer. As I reported last week, Muni is also donating the money Geller paid for the ads to the San Francisco Human Rights Commission. Geller is apoplectic, and has referred to the disclaimers as “shariah-compliant,” implying that Muni’s response is a reflection of adherence to Islamic law rather than an attempt to tamp down a public relations debacle.

Geller has continued to insist that the Rand-inspired quote in her ads refers to particular acts taken by Palestinian groups during the Israeli-Palestinian conflict, but the full context of Rand’s quote undermines this explanation:

Further, why are the Arabs against Israel? (This is the main reason I support Israel.) The Arabs are one of the least developed cultures. They are typically nomads. Their culture is primitive, and they resent Israel because it’s the sole beachhead of modern science and civilization on their continent. When you have civilized men fighting savages, you support the civilized men, no matter who they are. Israel is a mixed economy inclined toward socialism. But when it comes to the power of the mind—the development of industry in that wasted desert continent—versus savages who don’t want to use their minds, then if one cares about the future of civilization, don’t wait for the government to do something. Give whatever you can. This is the first time I’ve contributed to a public cause: helping Israel in an emergency.

So Rand wasn’t merely referring to just to Muslims, to Palestinians, or even to terrorists. She was describing all Arabs as “savages.” Geller, who named her blog “Atlas Shrugs” after Rand’s novel, surely understood this context when she chose the quote.